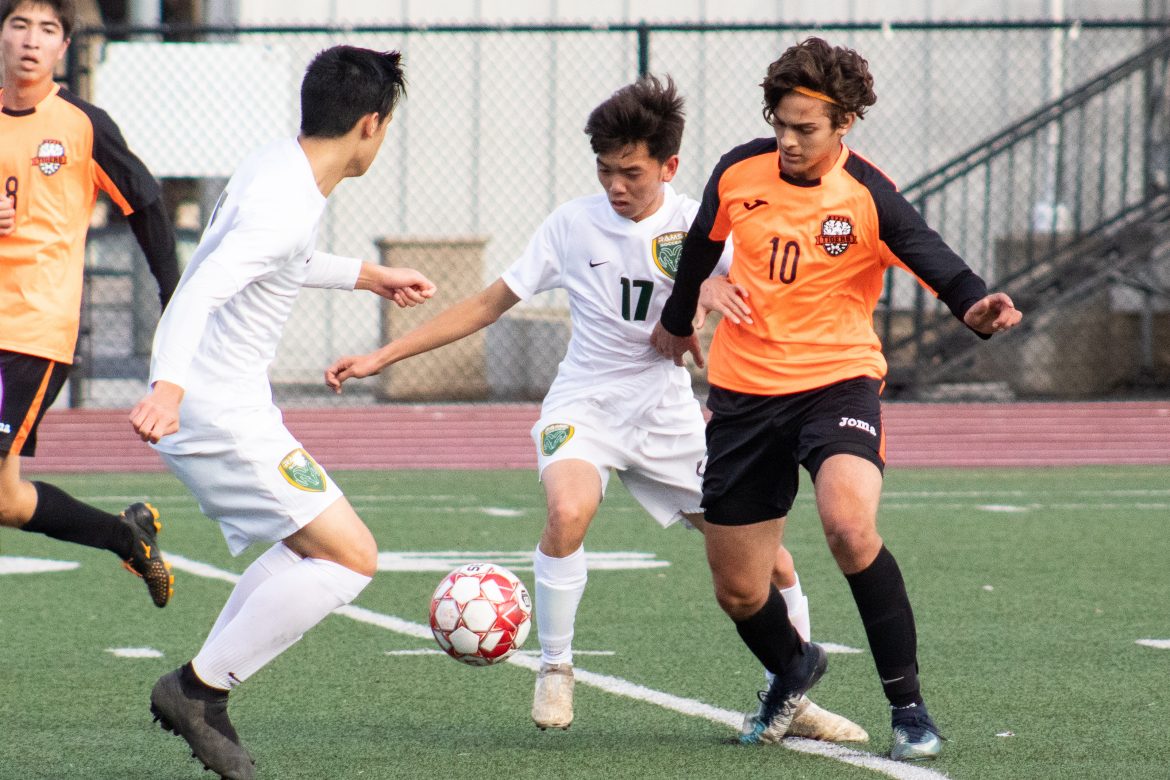 Boys’ soccer fell in its first CIF playoff match against the Pacific Pirates 2-1 on Thursday, February 7. A resurgence in offensive energy was unable to see the Tigers through the match’s second half, leaving the team with an unfortunate early playoff exit.

As soon as the kickoff marked the beginning of the match, it was evident that the Tigers had their work cut out for them. The Pirates were quick to take advantage of the unprepared South Pas defenders, advancing the ball to the goalpost in a matter of minutes. It was in this early assault that Pacific claimed the first goal of the match, forcing the Tigers into a suddenly desperate situation. Attempts at a defensive rally were dismantled, however, as only ten minutes later the home team marched back into Tiger territory and changed its one goal lead to two. With the half nearing its end, South Pas made an effort to improve its close passes and slowly but surely gain ground against the Pacific barricade. Even this proved difficult for the Tigers, as a rugged playing field disrupted otherwise simple passes and left the Pirates in consistent control of the ball.

The second half was a pleasant change of pace for the Tigers, who resurfaced offensively and took control of the field within the first few minutes of play. The Pacific defense was unable to match the quick maneuvers of the South Pas forwards and was forced to retreat by the half’s midway point. Unfortunately, once the Tigers reached the goalpost, the next notable obstacle presented itself in shooting accuracy. The Pirate post was bombarded again and again by kicks from the visitors, but desperation to change the scoreboard seemed to add to the Tigers’ inability to land a conclusive shot. With each passing minute, prospects for a South Pas comeback became increasingly slim.

Even with defeat seeming all but certain, the Tigers went down fighting, coming together in the last ten minutes of the half to score their only goal of the match. Junior captain Kai Endo claimed the goal off of a corner kick by sophomore Reo Snyder, leaving the final score at 2-1 and ending South Pas’ hopes for a longer CIF run.
The boys’ team ends the season with a respectable 14-4-1 record after exhibiting a remarkable undefeated streak throughout the preseason and overcoming a rocky start to league play. South Pas found its star players in senior midfielder Henry Barbera, a reliable aggressive force for the Tigers who was responsible for a six-goal onslaught in the team’s first preseason match, Snyder, a talented playmaker with sixteen goals under his belt by season’s end, and senior defender Sage Pierone, whose agility and backline presence was responsible for disrupting countless runs on the Tiger goal. The team must make up for the talent it will lose next year, as many additional crucial senior attackers and defenders alike will be exitting. Even so, the remaining Tigers show incredible promise in securing a dominant performance next season.