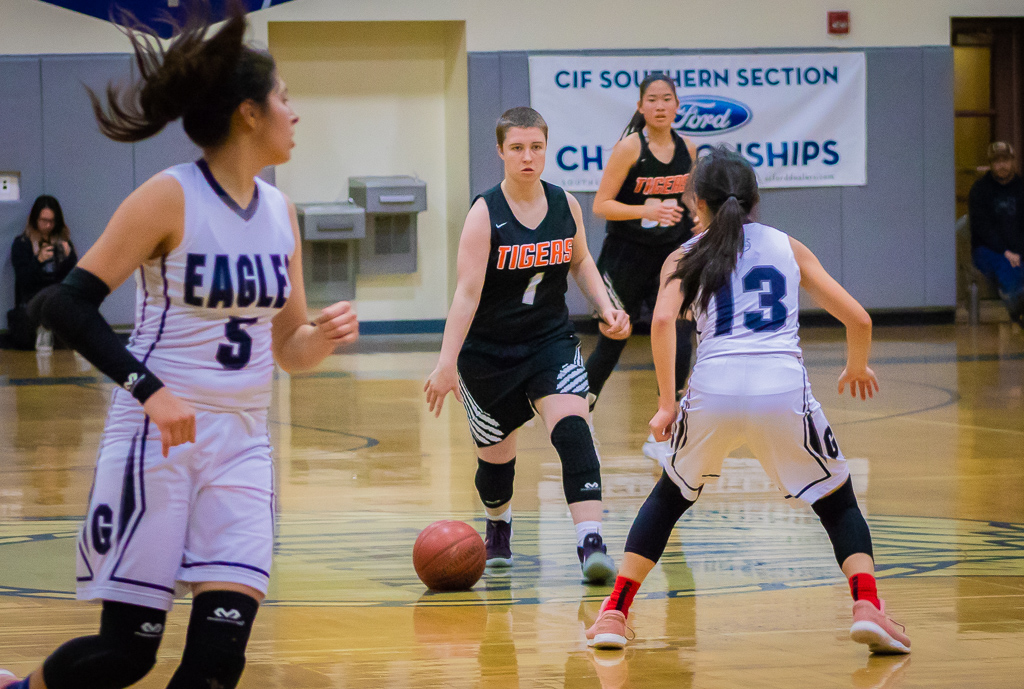 Senior Flannery Clark searches for a teammate in her last game as a Tiger.

Girls’ basketball suffered a crushing 64-49 loss to the Gabrielino Eagles in their opening CIF match on Thursday night on the road. The Tigers were unable to weather a hot shooting performance by the Eagles and trailed by double digits for the final of the game. South Pas had previously beaten Gabrielino this year without its starting front line of Allysan Tse and Lauren Kafkaloff, but the Eagles were too much for the Tiger defense to handle in this meeting. Gabrielino’s star player scored 23 points and finished with over 30 points, as she was able to carry the Eagle offense on her shoulders.

The Tigers got off to a quick start behind a three from Tse on their first possession, but then went cold against the Eagles zone defense later in the quarter. Gabrielino quickly seized the momentum from the Tigers and jumped out to a 23-13 lead after the first quarter in front of a loud, crowded gym.

The Tigers’ shooting woes continued in the second as they began to slip even further behind. Junior Sydney Sakamoto gave life to the SPHS offense off the bench, knocking down a pair of threes in the second to keep the Tigers within reach of a second half comeback. Tse picked up her second foul in the quarter, which forced her to switch off of guarding the Eagles’ main player. This allowed for Gabrielino to add on even more scoring as they had one on one mismatches across the floor. Junior Megan Yee also sunk a three pointer in the second, but South Pas went into the locker room down 39-26.

Gabrielino came out of the locker room with a full court pressure defense that forced several turnovers and extended the score to 45-28. The Tigers then began to mount a run later in the quarter, with Yee finding a cutting Kafkaloff on the baseline for a highlight and-one layup. Tse chipped in with a putback layup and swatted an Eagle shot at the third quarter buzzer with the Tigers only trailing by 11. Tse finished as the team’s leading scorer with 15 points.

“Today we were more panicked than the last time we played them because it was a CIF game,” Tse said. “We let our nerves get to us and we weren’t able to perform how we wanted to.”

A high pressure defense from Gabrielino once again disrupted the Tigers in the fourth and snuffed out any threat of a comeback. After the Tiger turnovers and miscues, Kafkaloff had another and-one layup, but it was too little, too late. South Pas was forced to see their season end after only one playoff game, a disappointment considering their high expectations for the year.

The Tigers will aim to build off this year’s failures and shift their focus towards the 2019-2020 season. South Pas will return five juniors, two freshmen, as well as sophomores Jenna Okohira and Michelle Jee who were called up from JV for the CIF playoffs.