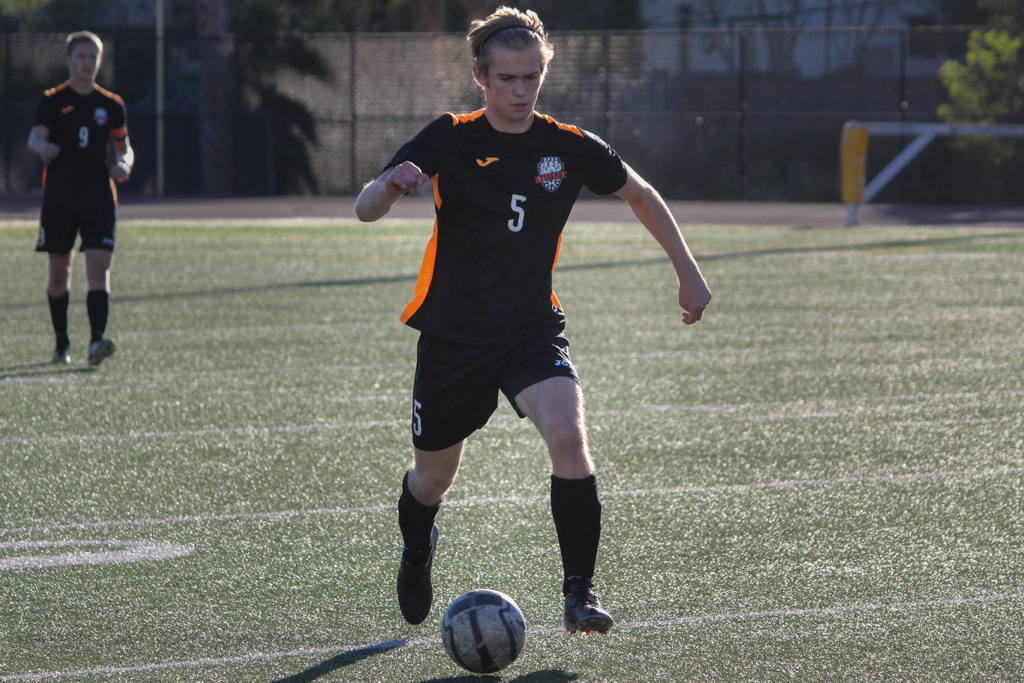 Junior Addison Foord eyes the ball while preparing to circumvent a defender. Despite the loss, South Pasadena

Boys’ soccer clinched a CIF playoff berth on Thursday, February 8 despite dropping a 3-2 contest to Blair. Going into the game, South Pas needed a win or tie against Blair or a Temple City loss to secure their postseason bid. Although the Tigers failed to execute on their end, they were saved by a 2-0 win by Monrovia over the Rams, allowing them to maintain their third place standing in the Rio Hondo League. This will be South Pas’ second straight CIF playoff appearance.

The Vikings struck first, taking an early 1-0 lead; a lead they would keep for the rest of the half. South Pas managed to get a couple of shots up themselves, but failed to complete any of the opportunities.

The Tigers pushed back into the lead with two goals of their own to start the second half. Junior Jett Donlevy scored the first after depositing the ball into the goal from just inside the box. Leading goal scorer Jack Renken connected for the second goal by using his speed and strength to avoid Blair defenders. South Pas was awarded an even a larger advantage when a Blair player received a red card, putting the Vikings down a man. Unfortunately, Renken was injured on the play and is questionable for CIF competition.

The score remained at 2-1 until the final ten minutes of the game when Blair scored two goals to win the game. South Pas’ final record stands at 11-5-4 overall and 4-4-2 in league.

CIF brackets will be announced on the coming Monday. South Pas figures to play either in a wild card game on Wednesday, February 14 or a first round game on Friday, February 16 depending on the seeding from the CIF committee.