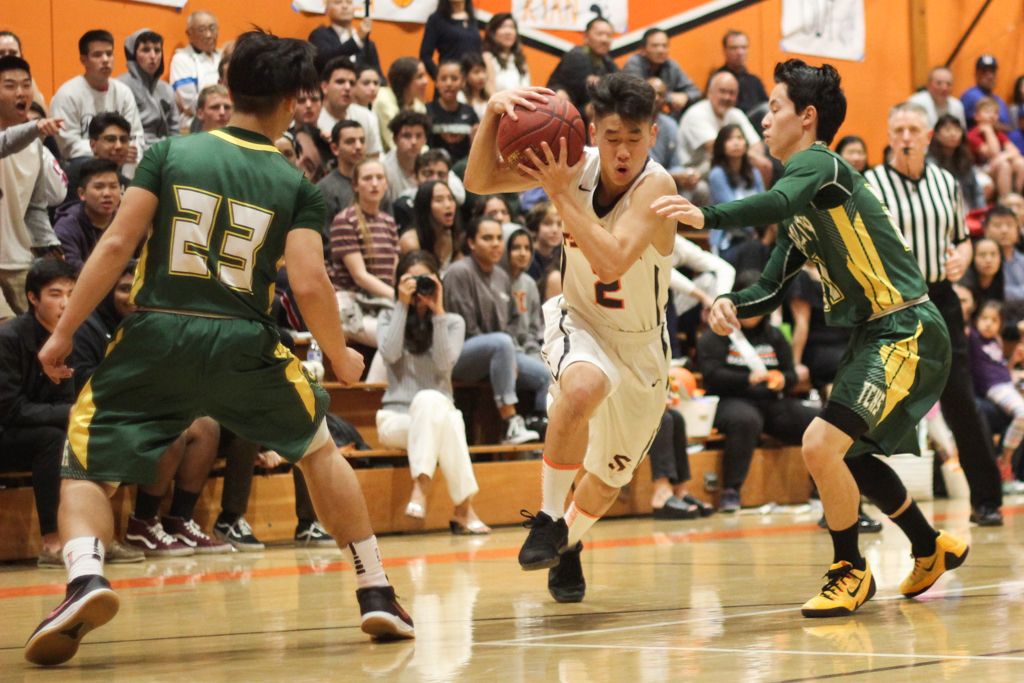 Senior Jaylen Park turns the corner on a defender while barreling towards the basket.

Boys’ basketball was defeated 77-52 by Blair on Thursday, February 9, unable to overcome the Vikings’ aggressive onslaught. The fast-paced, physical style of play lent itself to Blair’s impressive length and athleticism combination, which was the defining factor in the Vikings’ victory. The loss brings the Tigers’ overall and league records to 11-16 and 3-7, respectively, and solidifies South Pas in fourth place – along with Monrovia – in the RHL standings.

The manner of the first quarter resembled that of a classic pickup game: rebounds were frequently followed by half-court passes, which led to drives to the basket or open jumpers on the perimeter. Using their height advantage, the Wildcats’ extended arms disrupted passes and collected rebounds, allowing for multiple second-chance and third-chance opportunities. Consequently, Blair gained a 12-2 lead, which forced South Pas to convert to a defensive zone package, which had consistently halted opponents’ offensive rhythms. In this particular up-tempo matchup, this coverage allowed players to prevent an attack within their vicinity, rather than track a single player around the court as exists in a man coverage.

As the opening period progressed, it became apparent that the officials were hesitant to blow their whistles, which provided an incentive for players to escalate their physical approach. The Vikings proceeded to intensify their already-aggressive mindset in the backcourt, suffocating South Pas players on in-bounds plays and maintaining that pressure as the Tigers weaved their way to the frontcourt. South Pas adapted well to this Blair change, showcasing their quickness and quality passing as they gained opportunities. Senior Jaylen Park, junior Kai Jones, and sophomore Alan Quan were particularly impressive in their ability to evade Blair defenders and achieve penetration towards the rim. Meanwhile, the Tigers’ revised defensive strategy worked remarkably, allowing South Pas to establish an offensive rhythm. A team effort decreased Blair’s lead to 18-11 before the close of the quarter.

Although the Tigers were able to execute under the Vikings’ pressure, the swarming of Blair players around the ball forced South Pas to be in tip-top shape on every play, which is an extraordinarily difficult task. As a result, turnovers became increasingly common and the Vikings could dismantle South Pas’ momentum seconds after it was created. Flashes of brilliance from seniors Noah Uemura and Reno Goudeau supplied hope of a comeback, but Blair continued their intense man-press defense and subsequently extended their lead to 40-21 before the half finalized. 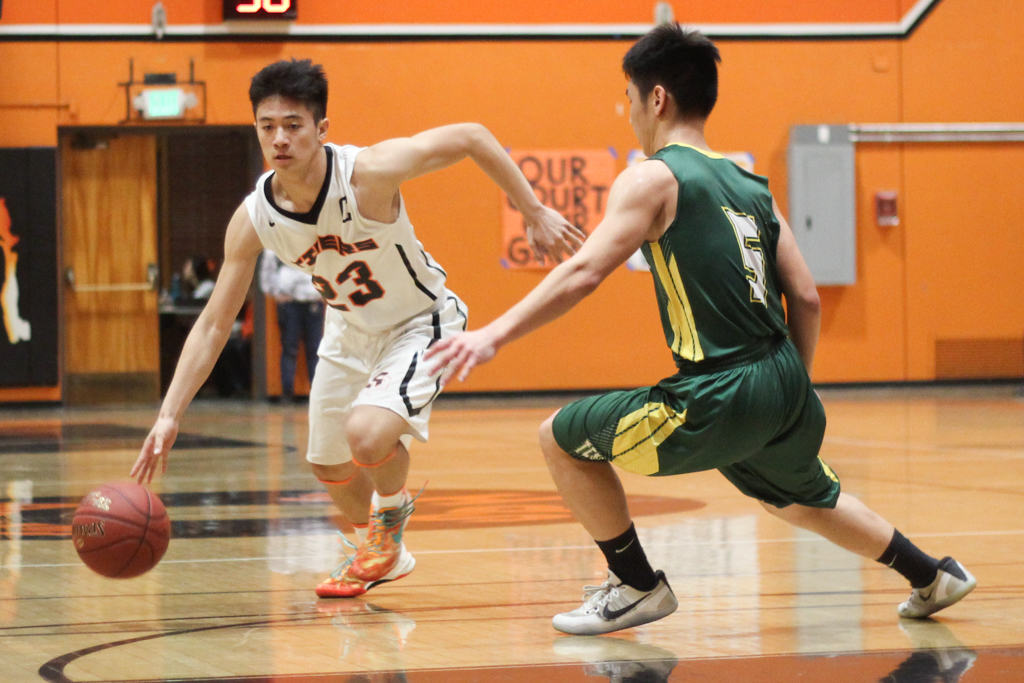 Junior Ryan Chuang eurosteps a Blair defender on his way to the rim. Chuang’s physicality and tough defense have been significant for South Pas throughout the season.

South Pas entered the second half aggressive and with an intense appetite for the ball; senior co-captain Danny Rios found Goudeau for a bucket in transition, before Rios drained a three to bring the deficit to 45-30. A bank shot from senior co-captain Nick Corvino prompted a timeout call from the Blair coach, who had grown frustrated by the superior hustle of the Tigers. Both defenses tightened their grip on the game – literally and figuratively – as defenders reached to grab the ball while attackers fervently pivoted in an attempt to maintain possession. A number of all-out scrambles for the ball resulted, with Blair benefiting from the physical nature of play, expanding their advantage to 56-35 as the third period ended.

The up-tempo transition game resumed in the final quarter, with a series of dunks and drives characterizing play. An offensive explosion ensued, with Blair and South Pas totaling 16 and 12 points in just a few minutes of play, respectively. With the Vikings holding a 25-point lead (72-47), substitutions and fouls slowed the pace until the final whistle.