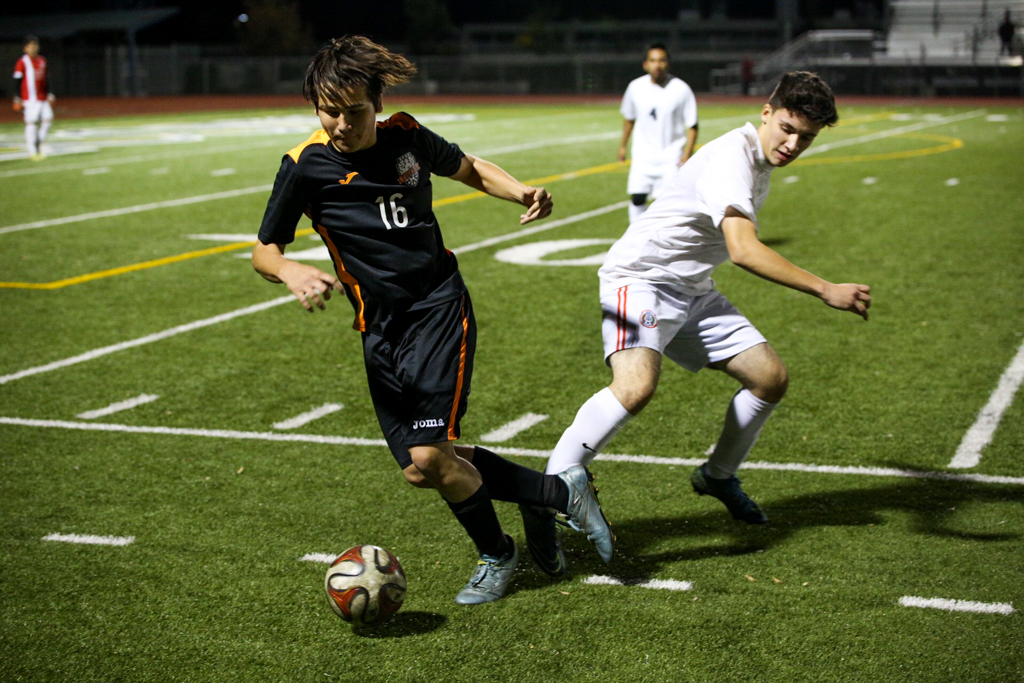 Boy’s soccer lost its second matchup of the season after narrowly losing to Duarte High School, 1-0, on the Falcons’ home field last Monday, December 19. South Pas and Duarte both played with little offense the entire game until a late penalty kick in the last minute of the game gave Duarte the lead. This frustrating loss gives the Tigers a 2-2-2 overall record.

After faltering against Schurr High School the match before, the Tigers headed into the Duarte matchup without key defensive players Hank Rainey (concussion) and Max Amido (hamstring injury). Although their leadership was missed defensively, the Tigers’ offense was one area where South Pas failed to develop a strong presence.

Midfielder David Choi dashes away from a Duarte forward after stealing the ball.

Both teams started off the game slow in the 55 degree weather, as each team tested its opposition’s capabilities on the field. As time wore on, the Tigers began to display a superior passing game which allowed them to penetrate deep into Falcon territory. However, every opportunity South Pas got on Duarte’s side of the field was squandered with bad communication and better overall defense from the Falcons.

The closest the Tigers would get on offense came from sophomore midfielder Raymond Yeo, whose free kick was more than 20 yards out and above the goalpost. Defensively, South Pas relied on senior goalkeeper Kevin Foster, who stopped incoming offensive runs. Finishing with five saves in the half, Foster managed to lock down the Falcon strikers to keep the score 0-0.

Coming back in the half, both teams began to play more physically, with the Tigers committing multiple fouls in the opening minutes. This would not sit well with junior captain Jack Renken, as he was forced to sub out by the referee five minutes in the half. With Renken out, the Tigers; offense struggled to get anywhere near Duarte’s goal. Foster continued to come in clutch for South Pas with numerous saves throughout the half, as well as blocking a penalty kick from the Falcons midway through the half.

Goalkeeper Kevin Foster makes an impressive save against a penalty kick in the second half to keep the score tied at 0.

Offensively, South Pas could not generate any momentum against Duarte. Although the Tigers managed to get a couple good looks at the goal once Renken subbed back in, South Pas continued to overcompensate on its shots and failed to capitalize. With 30 seconds left in the game, the Tigers committed a foul on defense, allowing Duarte to shoot a penalty kick. Although the initial shot by Foster was deflected, the Falcons followed up with another shot that fell into the goal for the game sealing score.

The team hopes to overcome its two game skid with a victory against Rosemead High School at home, on Wednesday, December 21.