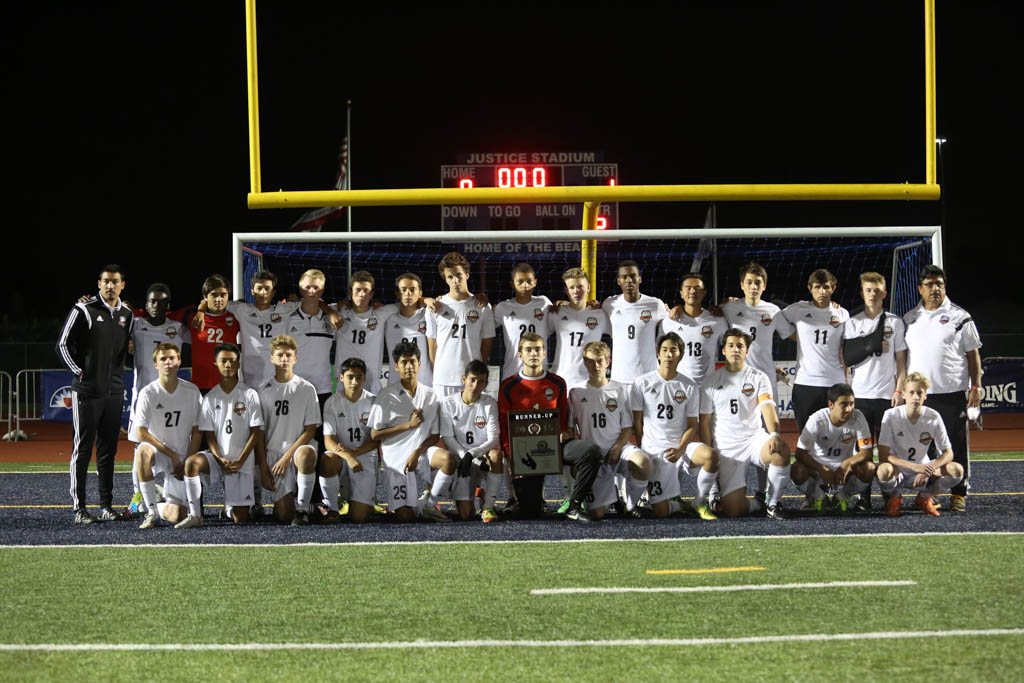 The boys’ soccer team’s magical run in CIF playoffs came to an end on Friday, March 7, when the Monrovia Wildcats topped the Tigers 1-0 in the CIF-SS Division VI final in a high-octane physical game. The game marks the end of CIF division playoffs, but state playoffs still loom for the Tigers.

The possession of the game bounced back and forth as the game began. Chances for both teams were present, but neither South Pas nor Monrovia could find a substantial chance. Junior Oskar Hernandez gave his teammates a couple of opportunities, but the Wildcat defense was always there to stop them. Senior Justin Fernandez helped set up the Tigers for success when he got the ball and threaded it through to Hernandez. Hernandez relayed the ball to senior Jordan Jackmon, who moved it onto senior Ramon Gutierrez. From just outside the side of the box, Gutierrez crossed the ball into junior James Tulin, who couldn’t set up in time to take a strong shot, and the Wildcats stopped another Tiger attack.

Not much could be found for the Wildcat offense, as the Tigers were consistently given opportunities on free kicks and corners. Despite Gutierrez’s dime passes in on these kicks, the Wildcat defense outmuscled the Tigers on every chance they got. This trend would hold true throughout the rest of the game. Gutierrez and Tulin then had an impressive one-two, but that too was stopped.

The Tigers weren’t deterred by this, and the speedy forwards kept up their offensive bombardment. The Monrovia defense held strong, and the Tigers found very few opportunities for penetration. Hernandez had an opportunity to lead the Tiger offense on a quick counter attack, but a Monrovia defender held him back, which drew a yellow from the official, forcing the Wildcat to be subbed out. Just minutes later, Hernandez had a breakaway chance on goal. With his defender trailing him by a few feet, Hernandez and the Monrovia goalie met about a quarter into the box. The defender came flying into the collision, and Hernandez came out of it in serious pain. After about a minute of writhing in pain on the field, Hernandez was helped off the field by the medical staff.

After a few more physical assaults by the Tigers, Monrovia’s Mo Alewine was presented with a yellow card. On the ensuing free kick, Gutierrez gunned the ball into the box, but junior James Anderson couldn’t connect with his head, and the ball bounced into the hands of the WIldcat goalie. On the Tigers’ next possession, Gutierrez laced the ball to Jackmon, who outran his defender en route to the ball. Despite having some distance between himself and his defender, Jackmon was still locked up when he took his shot, and missed wide. Neither team had many chances for the rest of the half, but senior Kevin Yonami was given a yellow card just before the half concluded at 0-0.

The Wildcats came out swinging right as the second half kicked off, but Yonami was there to stop them. The Tigers countered with a solid attack. Anderson was then given a yellow card for tripping Alewine.

Monrovia countered with another quick clear and run, but Yonami was there again. The Wildcats continued this attack when a striker dribbled through the entirety of the Tiger defense, and passed the ball onto a teammate who was open for a shot. The open teammate didn’t have time to set up for a decent shot, and missed left of the goal. Soon after, the Wildcats were given an offside call. The Wildcat, however, kept playing on, and shot the ball into the goal, despite the game being stopped. For this, he was given a yellow card.

The next Wildcat chance came a few minutes later, when a striker carried the ball into the Tiger box and was pitted 1-on-1 with goalie Sam Hoadley-Brill. Senior Oscar Jaime III came flying in, and timed a slide tackle perfectly to get the ball out of the box. Despite consistent defensive stops by the South Pas defense, the Wildcats found a break in the Tiger defense and scored a goal. The score was now 1-0.

The Tigers had a chance to counter this immediately, when the Wildcat defensive players muffed a Tiger free kick, but the Monrovia goalie just beat out senior Sam Anuakpado and jumped on top of the ball. Time was winding down for the Tigers, as Monrovia’s passes kept the ball out of South Pas’ hands. With three minutes left, the Tigers had a perfect opportunity to tie up the game with a corner kick. The kick was blocked by the Monrovia defense, but the Tigers were given another. Second verse, same as the first for the Tigers, and they were given a third corner. For the third straight time, the Wildcat defense stopped the Tigers’ attack. Time ticked down to zero and the game concluded with Monrovia as the 1-0 victors.

Baseball 3-0 after win over Hamilton