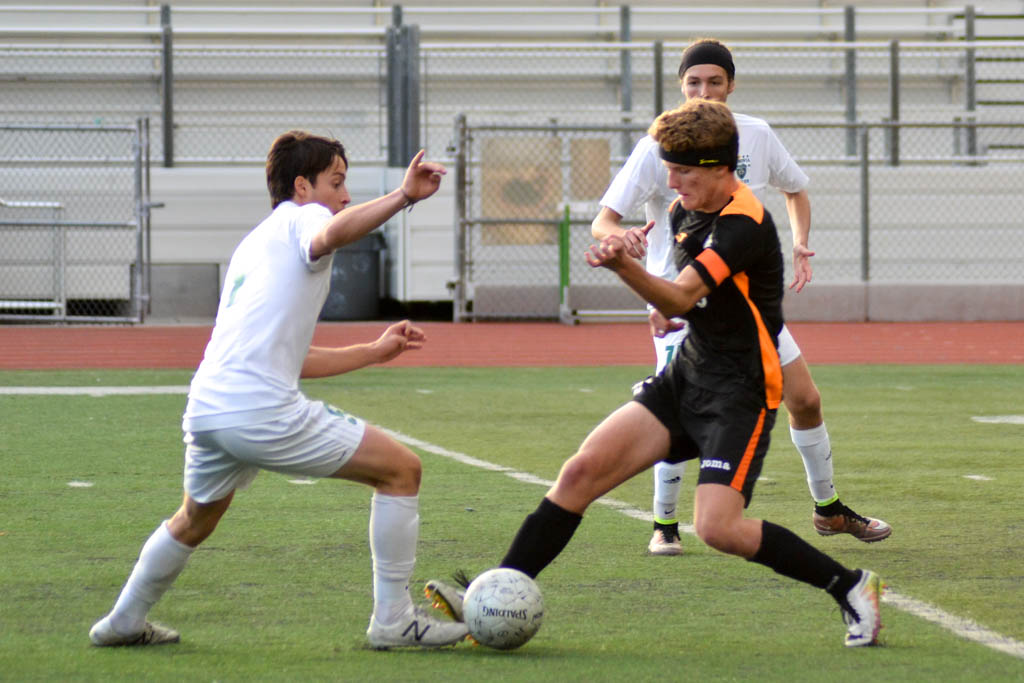 The boy’s soccer team fell in its league opener after losing 5-2 on Monrovia’s home field on Wednesday, January 11. South Pas now stands with a 0-1 record in league to go along with a 3-3-2 overall record.

Many players were unsure how they would play against Monrovia since the powerhouse previously handed the Tigers two blowout losses the year before. Like many of the team’s games before, South Pas took the field against the bigger Wildcats players, leaving some to think that the Tigers were the underdogs heading into the matchup.

South Pas struggles to keep the ball from Monrovia

Despite the apparent disadvantage, the boys did not seemed fazed by the Wildcats after junior captain Jack Renken connected with senior Brian McKenzie for a shot. Although it soared above the net, Renken continued to take the initiative on offense by  pummeling the opposing goalie. Renken’s fast attempt at scoring, however, left the midfield open for a Wildcat counterattack. Marching down with quality passing to fellow teammates, Monrovia managed to capitalize on the Tigers disarray with a shot on senior goalie Kevin Foster. Although Foster managed to deflect the shot, it wouldn’t clear the net before going in to give the Wildcats a 1-0 lead, 27 minutes into the game.

From here, the Wildcats seemed to hold the initial advantage on the field. Every drive that the Tigers attempted to formulate on offense was shut down by the Monrovia defense. After what seemed to be both teams just playing kickball, Renken managed to break away past the Wildcat defenders to set up a 20 yard shot on the goal and help tie the game 1-1 with 13 minutes left in the half.

Sophomore Ryan Wong chases after the ball during the first half.

After the goal, the Wildcats began to push the ball deeper into Tiger territory with the intent on scoring just before the half ended. With the clutch playmaking skills from Foster, South Pas managed to maintain the tie heading into the second half.

Renken continued to funnel the South Pas offense towards himself after scoring another goal for the Tigers off of a penalty kick in the second half for a 2-1 lead. Now desperate to answer back, Monrovia began a shooting frenzy on the Tigers defense and more importantly on Foster himself. After back to back corner kicks, the Wildcats failed to find a response to Foster’s clutch saves until a penalty kick by Monrovia gave them the lead at 2-2.

From here, both teams would begin to battle it out for possession of the ball. Numerous players would fall to the ground, followed by very heated arguments between athletes and officials. Eventually Monrovia managed to take advantage of the fatigued South Pasadena players and scored two additional goals for a commanding 4-2 lead late in the half. A final charge by Renken late in the half ended with a Wildcat player kicking away the shot before falling on the ground and injuring his leg. After being carted off by paramedics, the game resumed in favor of the Wildcats. A fifth and final goal on the Tigers sealed the game for the Wildcats after South Pas failed to develop any further momentum.

Although the Tigers struggled against the Wildcats, South Pas hopes to find luck at home in their next matchup against Temple City on Friday, January 11.