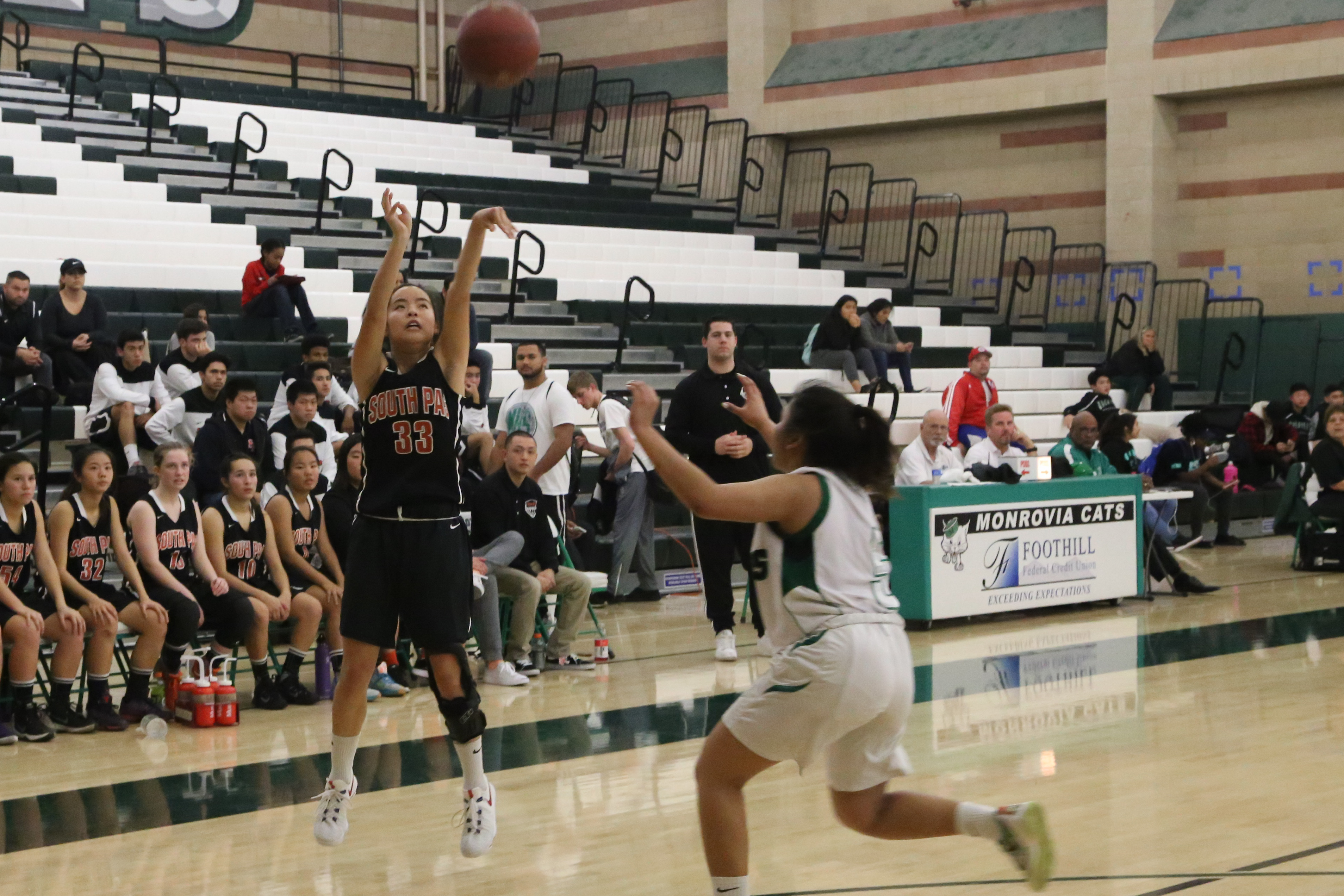 The girls’ varsity basketball team opened league with a commanding 77-48 victory over Monrovia on the road on Wednesday, January 11. The Tigers easily asserted dominance with an offense that constantly pressured the Wildcats and solid defense. This offensive control yielded a school record-breaking 18 three pointers. Though South Pas’ energy began to peter out as the game wound down, its lead was large enough to ultimately secure the win. The team’s league record begins at 1-0, and its overall record now stands at 7-6.

The Tigers immediately established control of the game in the first quarter. Quick passing and good ball control allowed South Pas to sink shot after shot, leaving Monrovia struggling to keep its defense under composure. On defense, the Tigers shut down the Wildcat’s attempts to score, and eventually held a 20-2 lead. Many reserve players were able to come in off the bench due to the wide disparity of points between the two teams. The Wildcats finally managed to capitalize on a turnover, and dribbled through the Tiger defense to earn a final basket before the quarter ended at 23-4.

South Pas continued to showcase its offensive prowess in the second quarter, when junior Naomi Kruzic scored a three pointer. Sophomore Kayla Zhang immediately followed suit. The next Tiger basket came from junior Tiffany Holmes, who quickly swiped the ball from a Wildcat and sprinted down the court for a layup. However, the Wildcats would find more scoring opportunities in the form of free throws. The formidable Tiger defense often fouled Monrovia while preventing the opposing team from driving to the basket. Eventually, starters sophomore Lauren Kafkaloff and senior captains Jalynne Li and Juliana Tom were put back in, and the trio continued to fuel the Tigers’ offensive stamina. The buzzer blared after a shot from Kafkaloff to finish the first half at 47-20.

The third quarter yielded similar results as the first half; Monrovia cracked under the Tigers’ unrelenting pressure. With all five South Pas starters in, a majority of the Wildcat players’ flailing arms were unable to prevent a cascade of baskets. Despite getting many rebounds, Monrovia’s sloppy passing could not penetrate the Tigers’ defense, though the opposing team’s best players occasionally broke through. Even though South Pas was clearly the stronger team, many of the girls’ shots did not fall. Sophomore Flannery Clark tacked on another three to the Tigers’ score, which was now 58-26. As the quarter dragged on, the Wildcat defense grew increasingly frustrated and committed more fouls. South Pas exited the third with 34 point lead at 64-30.

Li opened the fourth with an impressive steal, though her layup just bounced off the rim. The Wildcats were determined to try to close the gap and were able to score more points once several of South Pas’ starters went out. However, Monrovia’s efforts did nothing to undermine the Tigers’ lead. Still, many of South Pas’ shots did not fall, but eventually freshman Charlize Kruzic scored a three pointer. The girls began to lose energy during the fourth, which the opposing team attempted to capitalize on by forcing turnovers. However, these opportunities did not come to fruition a majority of the time. The Tigers ran out the clock to close out their first league game at a score of 77-48.

“I think this game showed what we’re capable of and what we can do,” Kafkaloff said. “It was an excellent game to get our team motivated and prepared for what’s to come. Our shooting was exceptional and we spread our many points among several of our players, which shows our strength in numbers.”

The girls next face off against Temple City at home on Friday, January 13 in the team’s second league matchup.