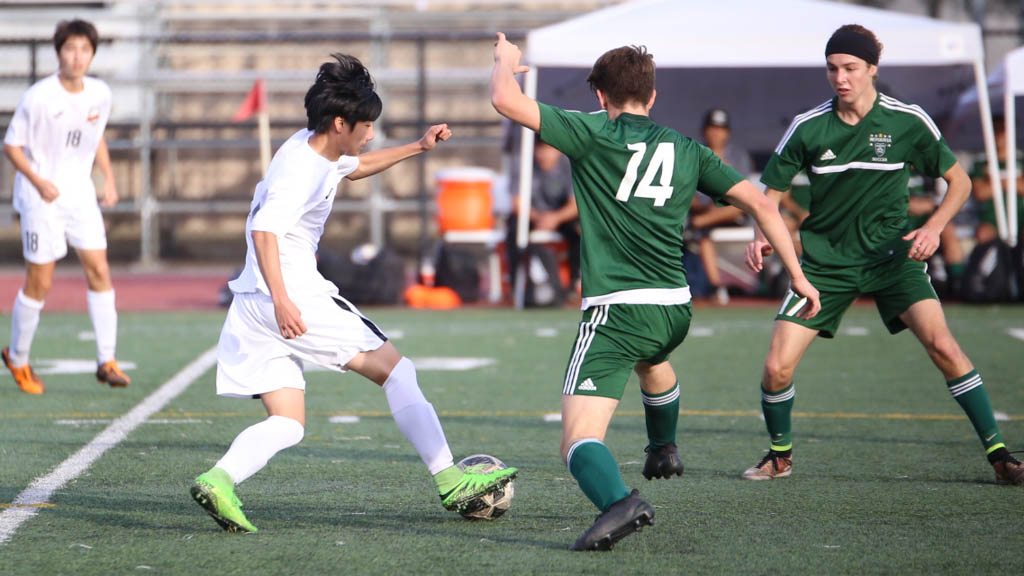 The boys’ soccer team effectively secured a CIF playoff position after upsetting the Monrovia Wildcats in the team’s last home game of the season by a score of 2-1 last Wednesday, February 1.

South Pas honored its senior players as they partook in their final home matchup. Among those honored were seniors Brian McKenzie, Max Amido and Kevin Foster.

After a lackluster performance against Blair High School on Monday, few thought the Tigers stood a chance against the Wildcats, especially after taking a 5-2 loss in the teams’ last matchup. Although this was the case, South Pas surprised many with an explosive first half offense when McKenzie found an opening at the net and barely missed the goal two minutes into the game. This momentum carried over to junior Jack Renken, who broke through the Wildcat defenders and forced the goalie to challenge him one on one. Once the goalie attempted to rush Renken, he responded with a shot on the unguarded goal, giving the Tigers the lead.

Henry fights his opponent for control over the ball just outside the 18-yard box.

With the momentum now on their side, South Pas did not back down against the bigger Wildcats defenders, attacking every chance that they had at the goal. After Monrovia committed a foul, junior Hank Rainey launched a free kick at the 35 yard line and floated it right into the goal to give South Pas a 2-0 lead over the Wildcats halfway through the first.

Monrovia quickly responded from its early setback and proceeded to counterattack the Tigers. Although the Wildcats were statistically better scorers than South Pas, the Tigers’ lockdown defense, led by Amido and Rainey, prevented Monrovia from finishing off of their repeated attacks.

Coming back into the second half, South Pas struggled to maintain the same level of intensity seen in the first. Renken notched up a pair of impressive runs towards the goal but had trouble finding the net as both his shots were either too high or far to the sides. Monrovia responded with fast-paced passing that South Pas struggled to match up with on defense.

After reaching the 25 minute mark, the Wildcats answered back on the scoreboard after a miscommunication between defenders gave Monrovia an easy goal. Now up by only one goal, South Pas desperately tried to ward off further Wildcat attacks. For the remainder of the match, the Tigers held onto their one point lead amidst Monrovia’s continued drive. In what felt like an eternity, South Pas fought off drive after drive, with save after save from Foster until the referee sounded for the games end.

“I always believed that if my players played to their true potential, we’d be able to take on anyone in league,” Head Coach Juan Zurita said. “With the way we played today, our players are fired up and want to keep winning.”

With a record of 5-2, South Pas falls behind La Cañada and the Wildcats in the standings. The Tigers hope to keep their three game winning streak alive in their next matchup at Temple City High School on Friday, February 3.