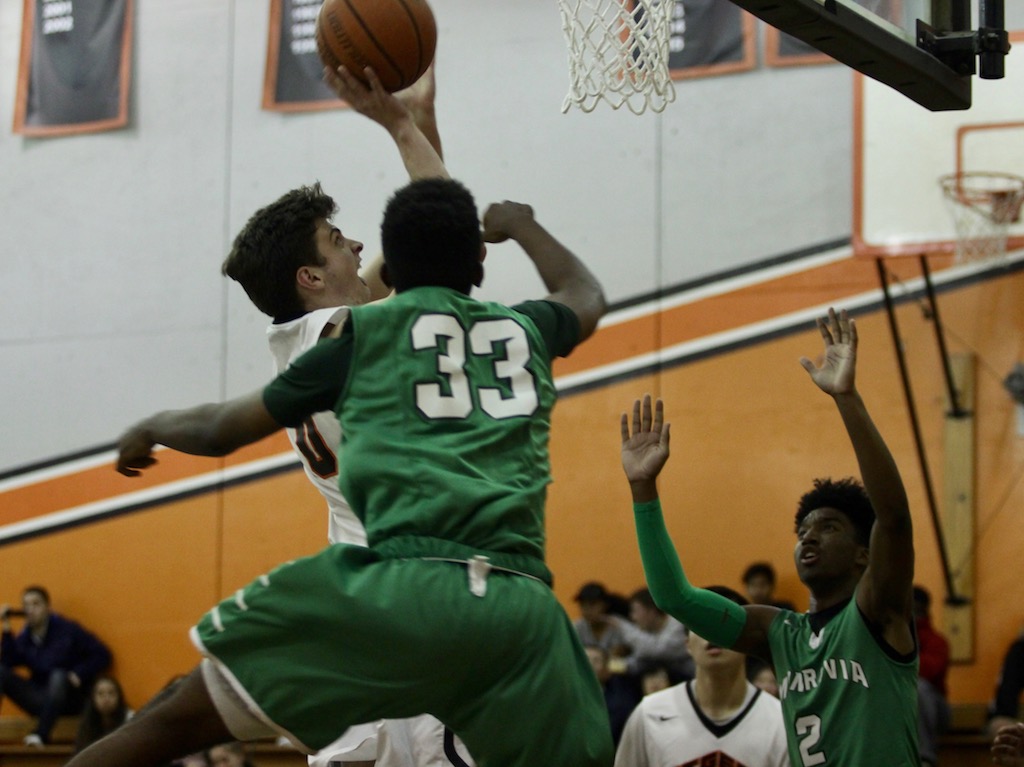 The boys’ basketball team secured fourth place in the Rio Hondo League with a comeback win over the Monrovia Wildcats on Wednesday, February 1. The team displayed its senior leadership and clutch shooting from behind the arc in the 53-48 senior night victory at home.

South Pas’ first half was defined by eight huge threes. The team struggled to produce any inside presence in the first quarter, and it was constantly forced to compensate with brute defense and outside shooting. The boys reversed the court often, grappling for momentum against Monrovia’s big defenders. Most attempts to penetrate Monrovia’s coverage resulted in turnovers and miscommunications. The team fed off momentum produced by clutch threes from seniors Lucas Fox and Stone Franco, who accounted for 13 of South Pas’ points in the first quarter.  The duo pieced together a highlight reel from all around the court, often times hitting shots over the hands of contesting Monrovia players. As the Tigers failed in the paint, junior Jaylen Park danced around the arc, nailing a three, to bring the score to 25-21. Junior Nick Corvino came off the bench with two threes that helped South Pas cut a five-point Blair lead.

Junior Danny Rios maneuvers around Monrovia defense with his eyes on the basket.

Hope briefly faded for South Pas as the Wildcats continued to own the paint in the third quarter.  The team was forced to play without the bruising force of Franco, who sustained an apparent injury while driving against a Monrovia player.  Its progress crumbled under the scrutiny of Monrovia’s’ physical players and timely shooting.

The Tigers marched back from the big deficit, with an improved inside presence and encompassing trap. Their fast break rolled over the Wildcats, with big turnovers from senior Matt Scholtz, who also finished a rebound that drew the score to 46-42. He would tie the game in transition shortly after, with a big steal and drive between Monrovia players. Tensions flared, as Monrovia took the lead with less than a minute left in the game. Facing a one point Wildcat lead, Corvino decisively found a lane and laid it in, giving South Pas a slim lead with 38 seconds remaining. He and Park each hit free throws that ultimately put the game out of Monrovia’s nimble reach.

Senior Alex Quan passes the ball to a teammate to avoid the Monrovia defense.

“We dug in, played tough defense and didn’t turn the ball over,” said Fox.

Corvino finished the game with 13 big points off the bench, often leading the team in times of duress. Fox finished behind him with nine points. Park and Franco scored seven and eight points, respectively, while Scholtz finished with six.

The team will continue to vie for a playoff berth in its next road game against the Temple City Rams, on Friday, February 3.