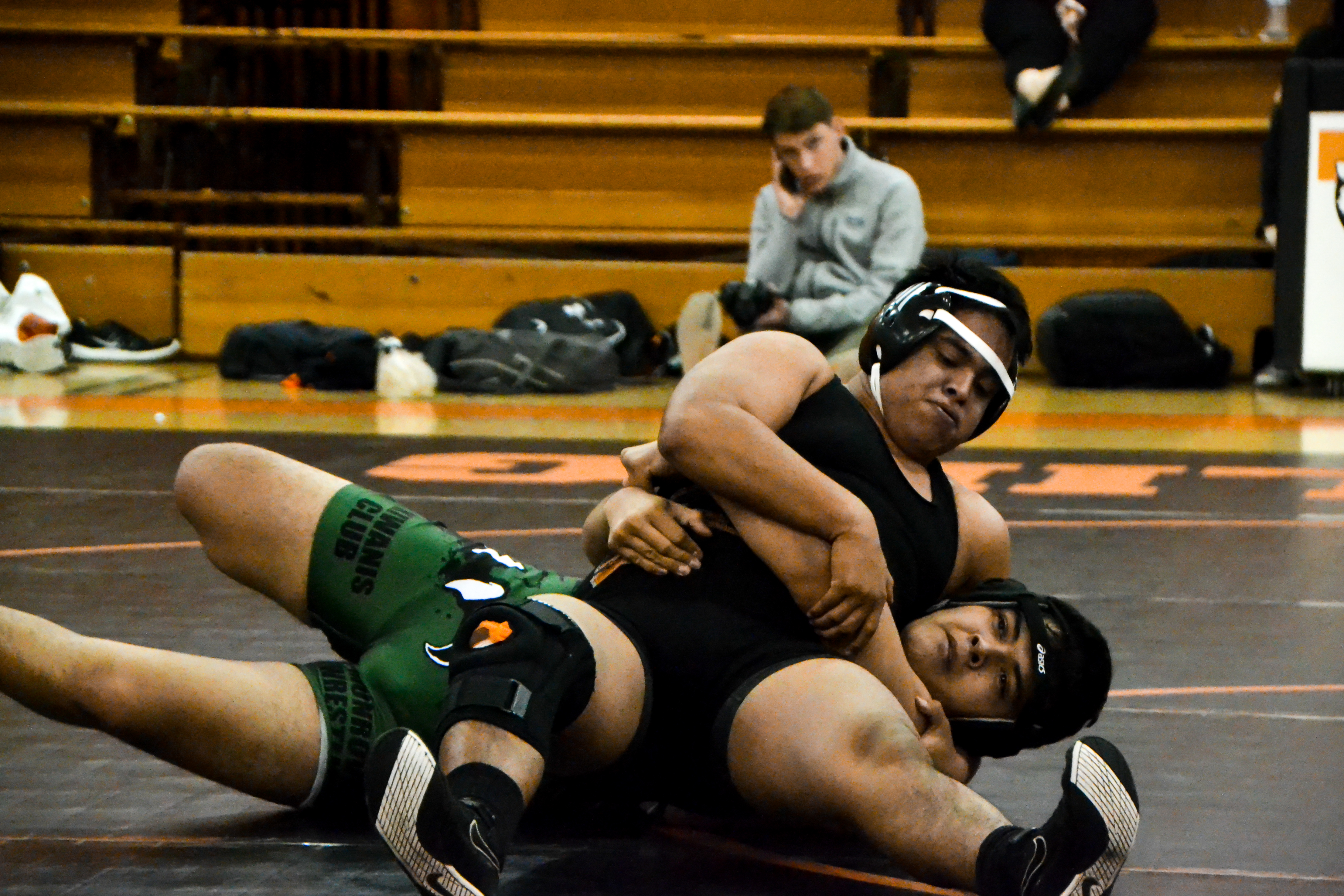 Tiger wrestling lost every match this season, so when facing the all powerful Monrovia Wildcats, it was difficult to imagine a different outcome. South Pas fell to the Wildcats on Tuesday, January 31 during a home match 24-60. The duel was the Tigers’ last of the season and served as a humbling experience for the undermanned squad.

By the time the varsity match started, it was only a little past 4:00 and the air was humid with sweat. The mat was scuffed and dirty from the previous matches, but it was ready to be used by sophomore Seung Ham (106 lb.) Ham and junior George Barrone (113 lb) both lost their matches, but were followed by junior Irvin Perez (120 lb,) who aimed to make a dent in the point difference.

Junior George Barrow gets mounted by an opponent.

Perez won his match swiftly in the first period, with 1:46 left on the clock, but his victory was short-lived when freshman Chris Kim (126 lb) lost to his opponent. With a violent slam from Monrovia, blood flew from Kim’s nose and coated the mat which ended in a break and some bandaging for Kim. But the brutality only grew from there. The extremely belligerent Wildcat slammed Kim to the ground for a pin and left him breathless on the ground.

SPHS got lucky in the 132 lb category when junior Nate Martinez remained unchallenged, claiming a few desperate points for the Tigers. This was followed quickly by an absence of South Pas wrestlers in the 138 and 145 lb categories, bringing the score of the match to 12-30, Monrovia.

All seemed hopeless until junior Sebastian Chinen (152 lb) faced his lanky opponent. Chinen had made his pins look effortless during previous league meets, but this match was different. Chinen couldn’t seem to get his opponent to budge. The duel ended uneventfully with the loud sound of the buzzer, but there was a lack of the usual smiles and whoops from the crowd when Chinen had pinned his opponent. This point victory was only a small consolation for the Tigers, who still trailed by 12 points.

This victory was quickly diminished by South Pas forfeiting the 160, 170, and 182 lb categories. The Wildcats seemed smug as the referee raised their hand to signal a win, despite simply having to step on a mat.

Junior Sebastian Chinen starts off against an opponent in a neutral position.

Senior Brayan Quintana (195 lb) was the Tigers’ final shot at recovering their dignity, and in the second period he made his team proud. The crowd leaned back in their seats as a loud smack echoed through the auditorium, followed by whistles and cheers where Quintana had thrown his opponent. Several “ouch”’s were murmured among audience members as they sympathized with the bruises the Monrovia wrestler that would inevitably feel. South Pas had redeemed itself, if only to bring the score to half of Monrovia’s (24-48.)

In the 220 lb weight class, senior Michael Blanco was faced with a highly trained opponent, and after much banter they engaged in a conjoined body roll. This eventually broke off and was followed by a comical moment when both competitors had to frantically readjust their headgear. The first to recover, however, was Monrovia, who followed up by scoring a pin in the first period. To end the duel, South Pas forfeited the heavyweight category and concluded the match 24-60, Monrovia in a disappointing finale to the Tigers’ season.