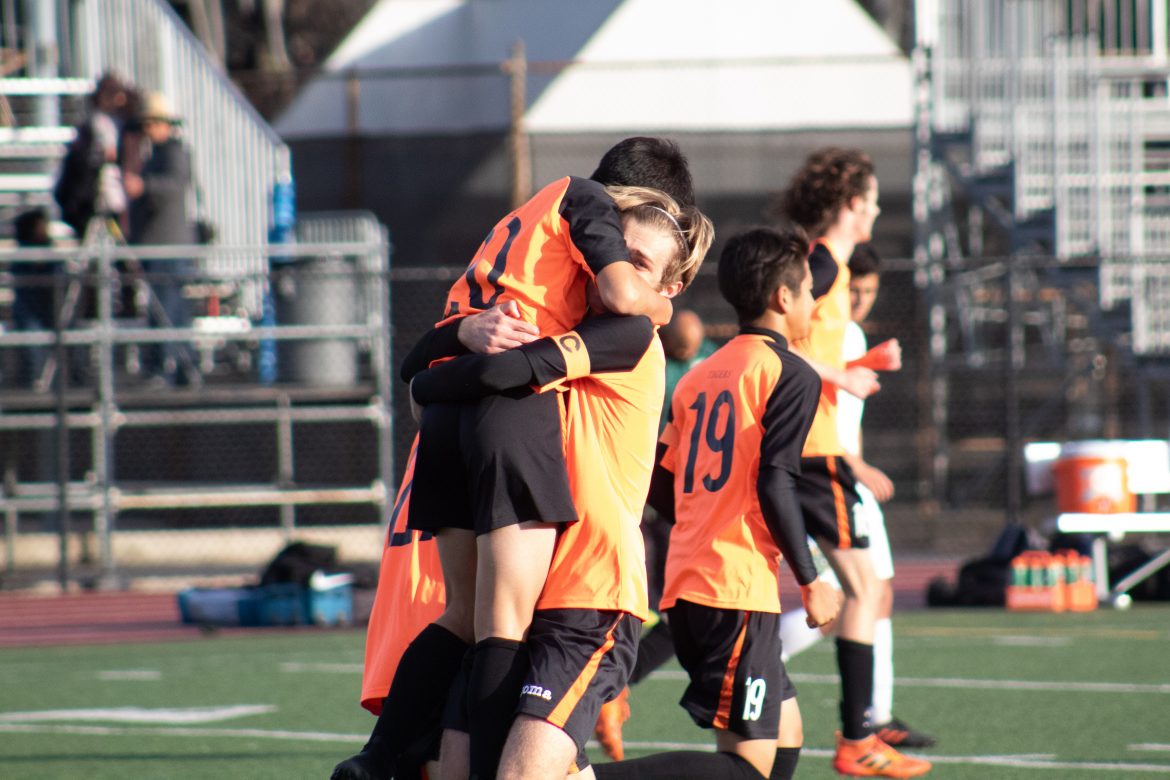 The team celebrates their dramatic win that clinched a CIF berth.

Boys’ soccer ended league play on a high note with a 4-2 victory over Temple City at home on Thursday, January 31, as they secured a third place finish and CIF postseason berth. All aspects of the Tigers’ play were enhanced for their final league match, as both a powerful offensive and defensive presence were used to quash the Rams. The boys’ team ends the season with a 7-3 record after overcoming a handful of rocky opening matches and ending league play with a five win streak.

The Tigers immediately took control of the field with the commencement of the first half. Frequent successful fights for the ball saw the boys’ team gradually push their players deeper into Temple City territory, and the Tigers’ agility proved useful in outmaneuvering the Ram backline. The ball remained in the Tigers’ control until senior Henry Barbera blew past three Ram defenders to land the first goal of the match at only five minutes into play. For a considerable while after scoring, the South Pas defense managed to hold off Temple City as the visitors sought to retaliate. Junior defender Kai Endo headed this effort and effectively dismantled several attacks from his opponents before they could evolve into more costly plays. The Tigers, having reclaimed the ball and once again pushed up to the Ram post, made numerous attempts to expand their lead. Barbera came extremely close on several occasions to scoring, yet his kicks proved just shy of the goal or barely within the Ram goalkeeper’s grasp. Nevertheless, South Pas continued to circle around the post while waiting for the right opportunity to strike. The team maintained its advantageous position thanks in part to overpowering pressure from senior Kai Dettman that left the Temple City formation in disarray. The Tigers eventually found their opening and abused their off guard opposing defenders to pick up two more goals, one from sophomore Kevin Ebata and another from sophomore Caleb Lee. The half ended at 3-0, leaving South Pas in prime condition for a decisive victory.

The second half presented a more pressing challenge for the Tigers. The Temple City defense had gained steam since the previous half and was intent on running down the prospering South Pas midfielders. The Tigers fought hard to overcome the Rams’ tight-knit barricades, yet the home offense was unable to establish the field dominance it had exhibited previously. With its advance all but halted, the boys’ team quickly reinforced its own defense. Senior Sage Pierone excelled in his role as defender, utilizing impressive speed to chase down the ball or any Ram attackers. The home side survived on mostly defense for the early portion of the half, but a single attack from freshman Arden Benitez reversed this and won the Tigers their fourth goal. Filled with new energy, the Tiger offense once again took over the field and held the team’s 4-0 lead for much of the half. Everything went according to plan for South Pas until a series of careless defensive errors near the conclusion of the half ended up forfeiting two Temple City goals. The Rams’ attempt at a comeback ended up being in vain, however, as time ran out almost immediately following the visitors’ second goal. A 4-2 reading on the scoreboard, combined with the blowing of the whistle to signify the Tigers’ final league win, saw the field filled with the sounds of cheers from the Tiger players and stands alike.

The Tigers performed to their highest ability in the must-win game and will be rewarded with a CIF appearance. The team will look to repeat the same success they enjoyed last year, in which they reached the quarterfinals. The CIF bracket will be released on February 2.