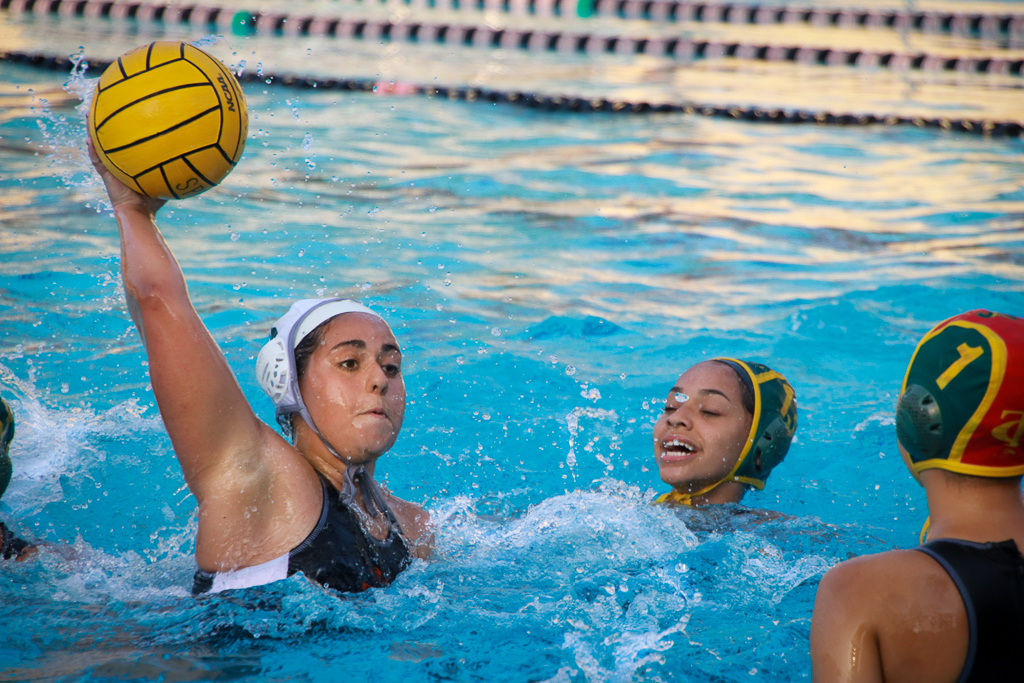 Senior Sydney Shettleroe attempts to shoot the ball past the Ram goalie during the Tigers' 5-3 loss.

After an uplifting game against San Marino, the Tigers faltered against Temple City on Wednesday, January 3, losing 5-3 in their last match of the league season. Despite this loss, girls’ water polo finished second in the Rio Hondo League with an overall league record of 5-3 and a season record of 7-5.

The game began with a fast-paced quarter filled with intensity. Sophomore Amanda Kanaly started off the quarter with an early possession of the ball. Passing the ball among each other, the Tigers were quick to move in on the goal, enabling senior Jael Osborne to find a position to score. However, Osborne, Kanaly, and senior Sydney Shettleroe found their shots consistently blocked by Temple City’s strong goalie. Both teams struggled to score against each other as each player displayed a strong defensive and offensive play, intercepting multiple shots while passing tactically. Shettleroe aided the Tiger’s defense line, stealing numerous passes from the Rams. Halfway through the quarter, the Tigers tried to break the tie, but senior Alison Lao and junior Kili Dickinson’s incredibly close shots hit the rim or shot past the goal. Minutes later, after Temple City’s aggressive approaches to score, junior goalie Krystal Lee found herself unable to block a half tank shot. The first quarter ended 1-0 with the Rams in the lead.

South Pas gained another early possession in the second half and were given extra time to reposition for more accurate scoring. However, the Tigers found their passes constantly blocked. After Lao’s attempt of a skip shot, the Rams were quick to send the ball crosscourt for an unexpected scoring. Although the Rams threw an aggressive shot, Lee, who was left to defend the goal by herself, kept a keen eye on the ball and was able to skillfully block it.

Temple City also displayed strong defense, blocking seven of the Tigers’ shots. Luckily, Dickinson was positioned at the right moment and scored an unreachable shot from the goalie. With thirty seconds left, the game increased in intensity. The Tigers had to contemplate carefully who to pass the ball to and as freshman Sophia Davison missed her shot, Shettleroe quickly snatched the ball and pushed it into the goal. The first half ended with a tied score of 2-2, heightening the audience’s anticipation.

This tied scoring prompted the Tigers to eagerly listen to the coach’s advice. As the second half began, the audience shouted encouragements, boosting South Pas’ motivation. The girls continued their strong defense, pressing against the opposition to cause multiple turnovers. Though many of the Tigers’ shots were blocked by the Rams’ goalie, Shettleroe still found the opportunity to score an entry pass. Out of nowhere, the Rams were able to outplay the Tigers and score twice. With this late scoring and only thirty seconds left, the Tigers were unable to score and make a comeback. The game ended with a defeating score of 5-3 in favor of the Rams.

“Over the past few years, I have had the privilege of experiencing firsthand the growth in our water polo program,” said Lao. “CIF began as a humble opportunity, then grew to be more of an ambition. This year, having been on both ends of the spectrum, we are taking it one win at a time.”

Despite the loss in the league finale, the girls plan to prepare for their upcoming match against their competitors of CIF, who will be announced on Saturday, February 2nd.