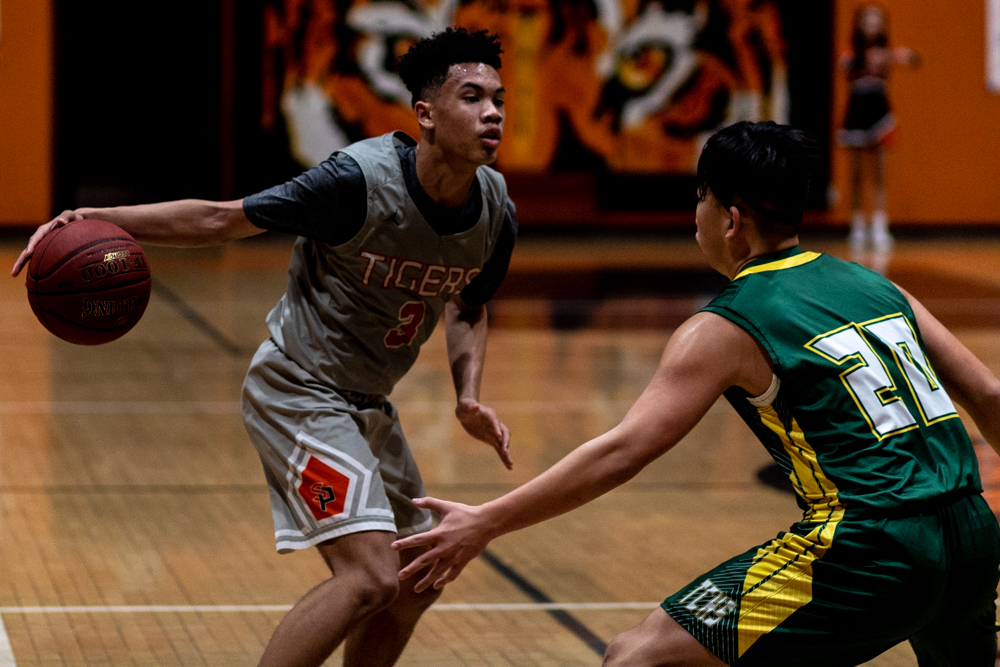 Next year's team will look very different for the Tigers, with all nine players departing SPHS after this year.

Tears filled the SPHS boys’ basketball locker room on Thursday night, as a deflated Tiger team contemplated its crushing 69-42 defeat to Temple City on senior night. South Pas went into the game needing a win to qualify for the CIF playoffs, but after competing closely with the Rams in the first half, the Tigers ultimately fell short in the second half. A Temple City 18-6 run in the third quarter proved to be the dagger for the hopeful Tigers.

Following the senior night festivities, Temple City agreed to let senior Jeremy Wong, who had his senior season cut short due to a ACL injury, begin the game by sinking a layup. South Pas also allowed the Rams an open layup to even the score, but the layup from Wong was a well deserved moment for the senior who was forced to watch most of league play from the sidelines.

Wong checked out of the game after the opening play, and the game got off to a quick back and forth start between the two teams. Senior guard Kai Jones started off hot from the field, knocking down a midrange jumper and a three pointer in the opening quarter. Seniors Matt Mayemura and Louis Jamerson were able to find senior Sebastian Au-Rivera on open back cuts to the hoop, extending the Tiger lead to 16-10 by the end of the quarter.

The Tigers started off the second quarter with another well executed back cut by Au-Rivera, who finished with a team-high 22 points, but Temple City quickly stormed back to take control from South Pas. The Tigers allowed the Rams to get offensive rebounds and score in the paint which led to a Temple City run. Jones provided a highlight play for the large, yet quiet student section late in the second quarter when he eurostepped past a Ram defender and finished with an up and under reverse layup. The Tigers went into the halftime break down 30-24 and needed a second half run to keep their playoff hopes alive.

Temple City dominated the Tigers on both ends of the floor in the second half. The Rams came out of the locker room with a barrage of three pointers and got hot offensively, while the Tigers went stone cold with their season on the line. Au-Rivera remained aggressive offensively and scored four layups in the third and fourth quarters, but it was too little, too late. South Pas’s efforts to press Temple CIty late had little success, and the visiting Rams finished the game up 27 points.

“We played our hearts out tonight and we left everything out on the court,” Wong said. “Obviously we’re disappointed, but we didn’t quit until the final buzzer and I couldn’t be more proud of my teammates.”

For the Tigers, the loss marks the end to a rollercoaster ride of a season. From a disappointing start in league, to a three game winning streak at home, the Tigers competed all year long against much taller and more athletic opponents. South Pas will graduate all nine of its players, which will usher in a completely new roster for coach Ryan Lee in the 2019-2020 season next year.