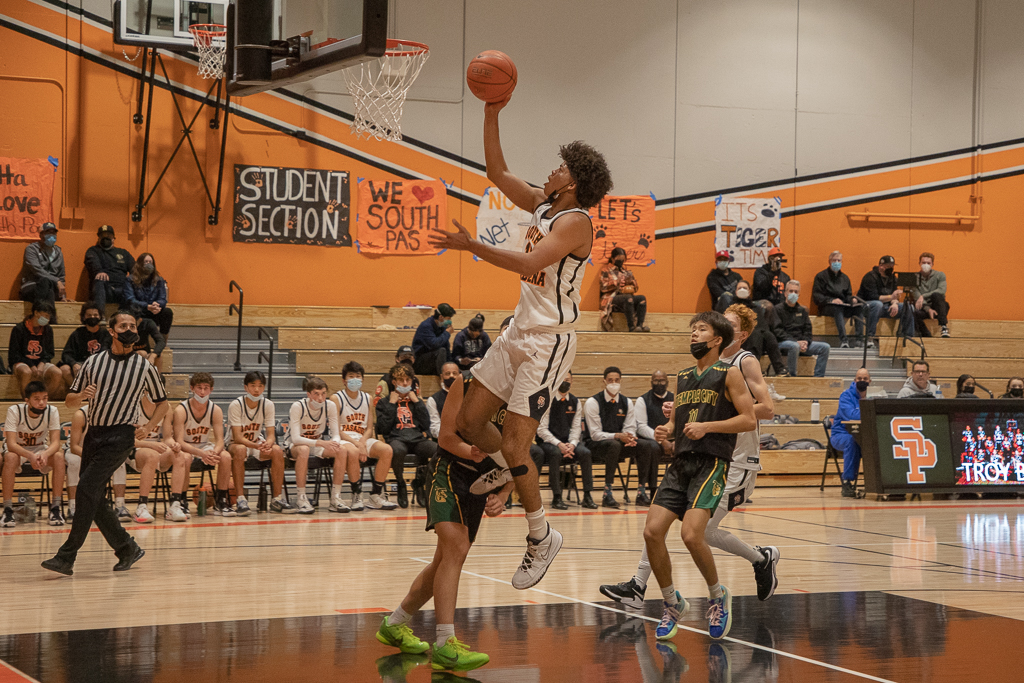 Senior center Sage Wayans was the star of Wednesday's game, constantly maneuvering through the Rams defense to score.

South Pas had an early lead in the game, right from the tip-off with senior guard and forward Niko Lawrence scoring a two-pointer seconds into the first. Temple City made considerable gains across the court, often besting South Pas in terms of speed but were ultimately thwarted by South Pas’s defensive plays. Not long after his first score, Lawrence returned with another two-pointer.

Throughout the first period, the Tigers maintained firm control over the game, never letting a Ram slip through. Senior center Sage Wayans, assisted by junior guard Nick Chabot, careened down the court to make his first basket of the night, bringing the score to 6-0.

The Tigers rode this premier success with a vengeance, often playing more aggressively and more energetically than their opponents. The Rams successfully landed a free throw but when Wayans dove to the floor to stop the ball from going out of bounds, Temple City semi-recovered by scoring a two-point shot from the right side of the key. Then, senior point and shooting guard Dillon Akers scanned his potential passing options, ultimately choosing Lawrence, and landed a basket tallying the score 9-3. In a fit of excitement, Wayans swung himself on the hoop.

The Rams landed another two-pointer around halfway through the first period, but the Tigers were determined to claw them out. Chabot and Wayans displayed tremendous teamwork as Chabot assisted Wayans in two separate baskets, one three-point, the other two. A missed Tiger basket led to Ram control when they landed five points, bringing the score to 13-9. Lawrence continued his stellar shooting streak by completing a two-point shot.

When the first period wound down, South Pas locked Temple City out of any new baskets, while racking up an additional five points. South Pas profited off a Temple City back corner violation to catapult them into a three-pointer as the buzzer sounded, bringing the score 27-9.

Temple City started the second period trying to keep control of the ball. This endeavor proved difficult given the strength and ferocity of South Pas’ players, leading to a stalemate as neither team could control the ball. This all changed when five minutes were left on the clock, and Akers broke the silence by scoring a three-pointer and bringing the Tiger total to 30. Temple City snatched the ball but it was quickly regained by Chabot who then passed to Akers, who scored another two-pointer for South Pas.

Following that, senior forward Jonathan Guy stormed the court and promptly scored, garnering the Tigers an extra two points. Senior guard and forward Ezekiel Pannell, matching Guy’s intensity, broke away from Ram defense and popped a quick two points, tallying the end of the first half 37-10. 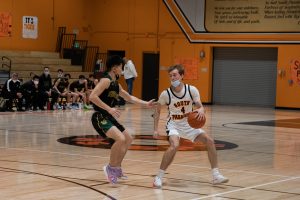 Constants on the court, Wayans, and Akers each landed baskets bringing the early second-half total to 39-10. During the minutes between, the Tigers flexed their incredible shooting muscles with Guy, Wayans, Lawrence, Akers, and junior wing Finny Ho all scoring multiple baskets this period. The Tigers played incredible defense, stretching and contorting their bodies to fend against the incoming Ram offense. One instance included a Ram player leap-frogging a hunched over Wayans, resulting in two successful Tiger free throws.

By the end of period three, Temple City began to ramp up their methods. In response to a Tiger two-pointer, free-throw, and out-of-bounds foul, Temple City made both foul shots and four additional points. By the highly lucrative third period for both teams, Tigers towered with 56 points compared to the Ram’s 18.

Due to the near forty point difference, period four included a lot of underclassmen players. Freshman guard and wing Oni Balogun completed a two-pointer with an assist from junior wing William Esnault. Freshmen James Dowd and Miles Nowe scored one point apiece off of free throws. The tension of the game grew deadly when a Ram defender attempted to headlock Chabot, which resulted in three Tiger free throws, one of which was successful.

The Rams matched the Tiger’s aggression and fought for the ball scoring two-pointers early on. Minutes later, they were back, gaining four more points and dodging the Tigers. The Tigers were not ready to give up, as Dowd sprinted down an open right side of the court, and landed a two-point basket. By the end, the Tigers scored another three-pointer from the outer edge of the key, bringing the final tally to 65-29 for the Tigers.

“We definitely could’ve played better in the fourth quarter but our defensive intensity was insane today. I feel if we keep it up like that, it would be hard to stop us,” Akers said. “The little break that we had affected us, we gotta get back in shape so that [what we did in] the first through third quarter could happen every game.”

The Tigers play their next league away game against the Blair Vikings on Friday, Jan. 14.