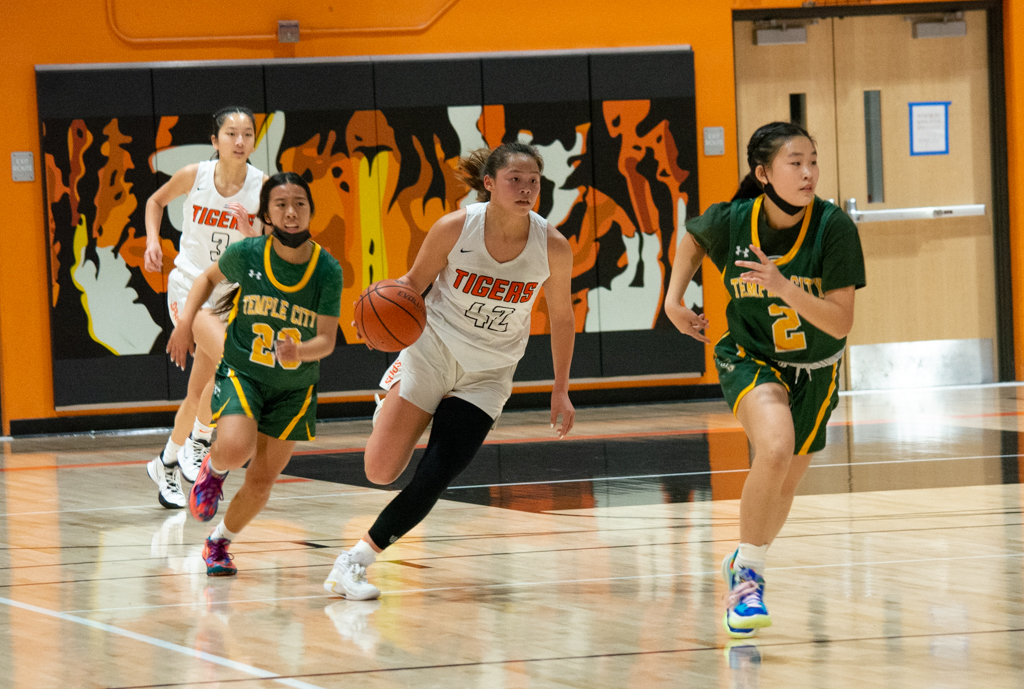 Girls basketball defeated the Temple City Rams 63-43 at their first league game on Wednesday, Jan 12. The Tigers currently stand at an overall league ranking of 13-1, marking an impressive start for the team.

Though Temple City made a valiant effort, they proved no match for the Tigers’ precise offense. From the get-go, the Tigers made quick, clean passes, disorienting their opponents, and giving them the freedom to make shots unimpeded. Senior forward Alyssa Chan assisted Jamie Kim with a 3-pointer, passing the ball over the Rams so quickly they did not have time to react. Meanwhile, shot after shot from Temple City was foiled by the Tigers’ aggressive defense, forcing turnovers and resulting in a score of 16-4 at the end of the first quarter.

Both sides increased intensity at the start of the third quarter as Temple City began making more aggressive plays, but they were no match for the Tigers’ defense. Backed into the edge of the court, the Rams were frequently forced into making desperate and wildly unsuccessful shots. Meanwhile, the Tigers continuously made offensive rebounds before passing the ball around for another shot, further confusing the Rams. Senior forward Allysan Tse and her sister, sophomore guard Dylan Tse dominated the court, scoring 3-pointers and taking the ball off rebounds.

The third quarter saw the Tigers forcing more turnovers and relentlessly running down the clock. Though there was constant back-and-forth, the Rams were left in the dust as the Tigers completed long-range passes across the court and bolstered their offense. Running down the clock, Dylan sank the last shot with a second to spare, ending the quarter with a score of 50-29.

Temple City’s renewed vigor in the fourth quarter could have caused some trouble for the Tigers, but South Pasadena’s comfortable lead and adaptive strategies helped them secure the quarter. Though the Rams showed an impressive recovery in this quarter, they were no match for the spectacular 3-pointers Chan made from half a court away. Continuing their trapping defense, forced turnovers, and quick passes, the Tigers’ 20 point victory was ensured with a 63-43 score.

The Tigers will next challenge the Blair Vikings away on Friday, January 14 at 5:15.