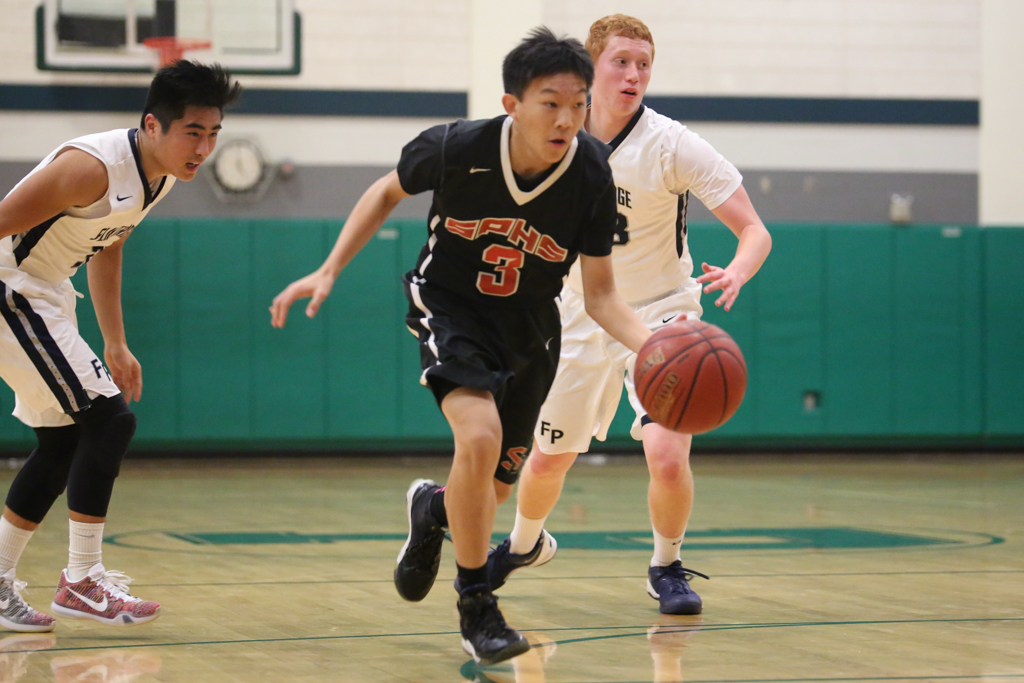 With under five seconds left on the game clock and South Pasadena down 57-55, senior Nick Corvino strode to the free throw line. As players positioned themselves to scramble for a rebound, Corvino received the pass from the referee, took a breath, and let the ball fly.

After making his first free throw, the tense crowd sat, anxiously waiting on the free throw which would likely decide the game. Despite immense pressure, Corvino’s arching shot landed perfectly in the net for the second time in a row, tying the game at 57 and sending the Tigers and Rebels to overtime.

Unlike the ending, the first quarter didn’t adequately demonstrate the Tigers’ impressive offensive and defensive capabilities. After holding even with the Rebels, South Pas relinquished control of the game, allowing Flintridge Prep to tally nine consecutive points and gain a 15-7 lead. A timeout call by coach Ryan Lee brought defensive adjustments, as the Tigers switched from a man coverage to a suffocating zone defense. Suffering a size disadvantage, the Tigers utilized their unmatched pace and ferocity as they zipped around the court, cutting off passing lanes with extended arms and forcing contested shots and steals. In addition, a major reason for the Rebels offensive success was their ability to grab rebounds and hold possession, tiring out the South Pas defenders. Zone coverage caused Flintridge Prep players to spread out to provide passing lanes, resulting in less Rebels in rebound-plentiful areas, and more chances for the Tigers to go on the attack.

While the adaptation on defense didn’t yield maximum results immediately (the Rebels lead 20-13 heading after one quarter), South Pas shut down the Flintridge Prep offense in the first three minutes of the second period. The Tigers capitalized on this opportunity, taking control of the lead on a dominant possession by senior Danny Rios. Unfortunately for South Pas, the Rebels awoke from their nap on offense and took little time totaling 10 consecutive points. As the clock winded down, the Tigers responded with five tallies of their own, finishing the first half with a 30-29 score.

As both defenses tightened their grip on the game, the physicality intensified and competitive nature escalated. The squads traded buckets, each team forcing turnovers and proceeding in transition. A late run by the Tigers increased their lead to 44-40 heading into the fourth quarter.

South Pas maintained their lead from the latter half of the third period, as numerous Tigers contributed to the offensive effort. The tide turned when the clock hit 4:00, and Flintridge Prep showcased their CIF-quality attack, gaining a 54-51 lead in the blink of an eye. In a single possession, the Tigers made numerous attempts to tie the game, firing threes from all over the court. Senior Benjamin Kent aggressively flew around the court, collecting rebounds and kicking the ball to the perimeter for three-point attempts. Unfortunately, this valiant effort didn’t have an effect on the scoreboard, as the Rebels eventually gained possession. South Pas remained stout on defense, forcing a bad in-bound pass and enabling Corvino to get to the free throw line and tie the game at 57.

The Tigers wasted no time on offense in overtime; Corvino hit two additional free throws and Kent juked out the infuriated Rebels center and drilled a three to give the Tigers a 63-60 lead With 1:15 remaining, the squads clashed in a battle of fouls and timeouts, each team methodically gaining the most of each possession. As seconds ticked off the clock, the gravity of each play exponentially grew, and substitutions were constantly made to better ensure the chance of victory. Corvino snatched a massive rebound and drew a foul, knocking down two more free throws and putting the game out of reach. Flintridge Prep staged a last-second comeback, decreasing the deficit to 65-63, but it was too little too late.

Boys’ basketball will compete in the Norco-Glendora tournament on Tuesday, December 12.