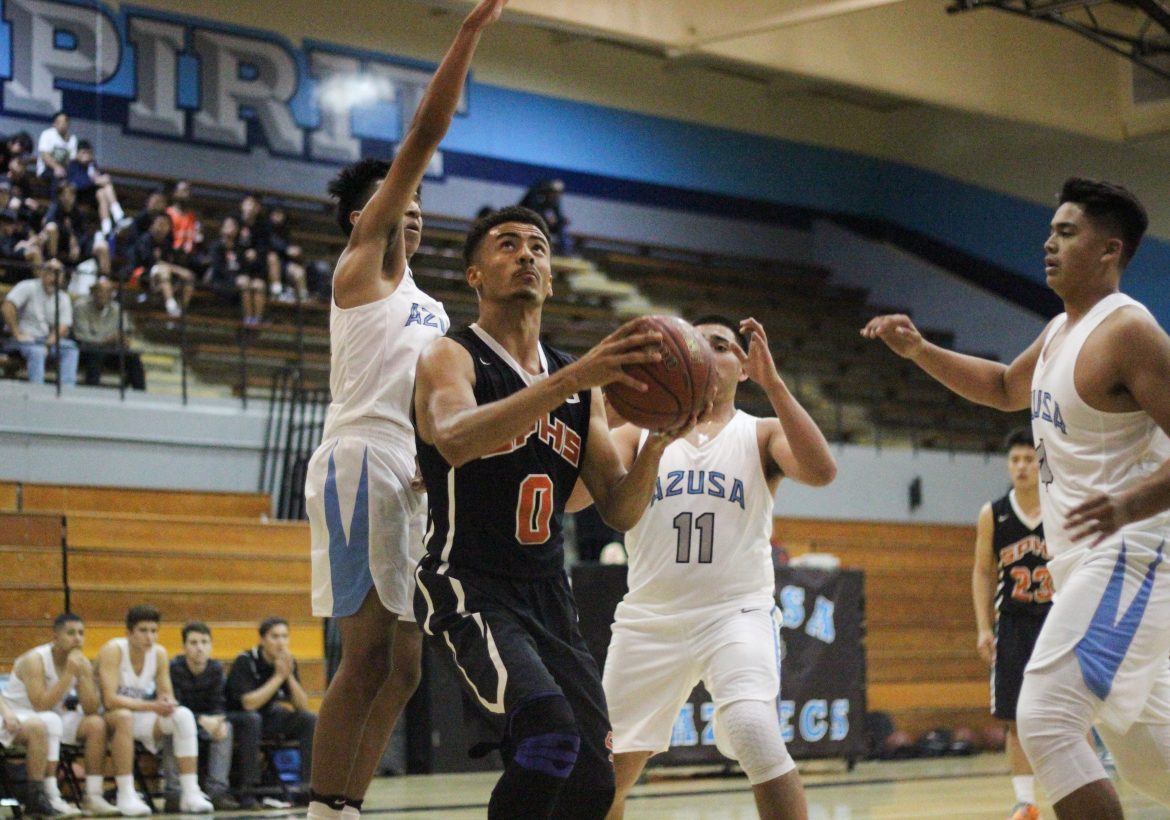 Senior Reno Goudeau head fakes his defender as he drives to the rim during South Pas 88-41 win over Azusa.

Maintaining its momentum from a late, but unsuccessful comeback against Mark Keppel, the Tigers drilled an impressive 22 points in just eight minutes against ABGU in the first quarter. This dominant effort continued in the second and third periods, in which South Pas totaled 44 tallies, while holding the Titans to just 32 points in the entire game.

Unfortunately, the squad’s offense slumped in the first quarter against Flintridge Prep, allowing the Rebels to grab a 22-12 lead. Sophomore Alan Quan and senior Danny Rios took charge on the attack, cutting the 10-point deficit in half. Although South Pas was able to chip at the Rebels’ lead throughout the second half as well, Flintridge Prep did just enough to disrupt the Tigers’ flow on offense, securing a 65-63 victory.

The intense matchup between South Pas and Providence was the inverse of the Flintridge Prep game, only it ended in a defeat for the Tigers as well. South Pas gained a lead early on in the first quarter, but the Pioneers offense started to establish their offensive rhythm in the second. Coaching advice at halftime largely benefited Providence, who maintained their high-quality offense while limiting the Tigers to just 12 points in the third period. Despite an all-out battle on offense in the final quarter, South Pas failed to grasp a lead, resulting in a 77-72 loss.

In an intense RHL showdown, the Tigers faced the San Marino Titans. South Pas had the upper hand in the first quarter, gaining a 14-10 lead before relinquishing it by the end of the first half. The second half highlighted the squads’ attacking abilities, with seniors Nick Corvino and Benjamin Kent and junior Sebastian Au-Rivera knocking down 28 of the Tigers’ 42 second half points.

Following South Pas’ 88-41 demolition of Azusa and 66-63 victory over Flintridge Prep, boys’ basketball will compete in the Norco-Glendora tournament on Tuesday, December 12.