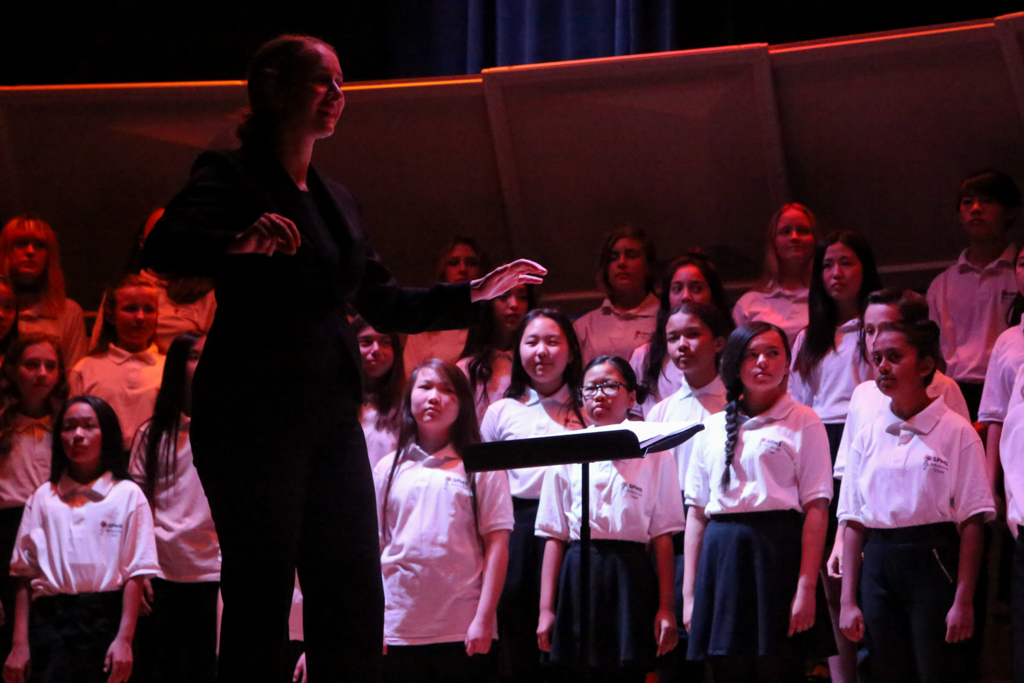 Ms Donovan-Jones brought together both her middle school and high school choir students on Wednesday night for a free and enchanting musical performance.

The South Pasadena High School and Middle School choirs joined together Wednesday night for a choir performance in the SPMS auditorium featuring almost 100 voices, from sixth graders to seniors.

The theater was packed with nearly every seat filled. Ms Donovan-Jones, the director and choir teacher at both the middle and high school, accompanied by Ms Jacquelyn Schreiber led a line of children in white shirts and black pants and skirts. Then the singing began, soft voices rose and fell. The music flies through eras and genres, shifting from the contemporary to the classical and operatic.

Opening with the Underground Railway spiritual “Keep Your Lamps,” sung by the SPMS Beginning Choir class, the concert wove its way through such songs as “Cherry Blossoms” (A Japanese piece devoted to the beginning of Spring) and more contemporary pieces, such as Danny Elfman’s “Alice’s Theme.” Alongside these group pieces were several solo pieces: “Supermarket Flowers” by Ed Sheeran, sung by SPMS Advanced Concert Choir singer Audrey Omidi, “The Wizard and I” from the musical Wicked, sung by middle schooler Sequoia Ding, “Wie Melodian zieht es mir” by Johannes Brahms sung by SPHS Choir singer Kieran O’Neal, and perhaps most impressively, an original piece sung and performed by SPHS Choir singer Eddie Chang.

“It was very fun to be around such a young group who shared the same music interest as us,” said junior choir member Amalia Navarro on performing alongside the middle school choir, “they were phenomenal! It was nice to see them so dedicated to something they loved. I think the high school choir was very impressed and inspired by them.”

The SPHS-SPMS Choir concert proved to be an excellent (and free!) excursion into the beautiful world of the sung word. Through a mix of traditional choir pieces, an operatic solo, and a blend of contemporary music with an a capella adaptation, the SPHS-SPMS Choir awed the packed theater with music that delighted and inspired.