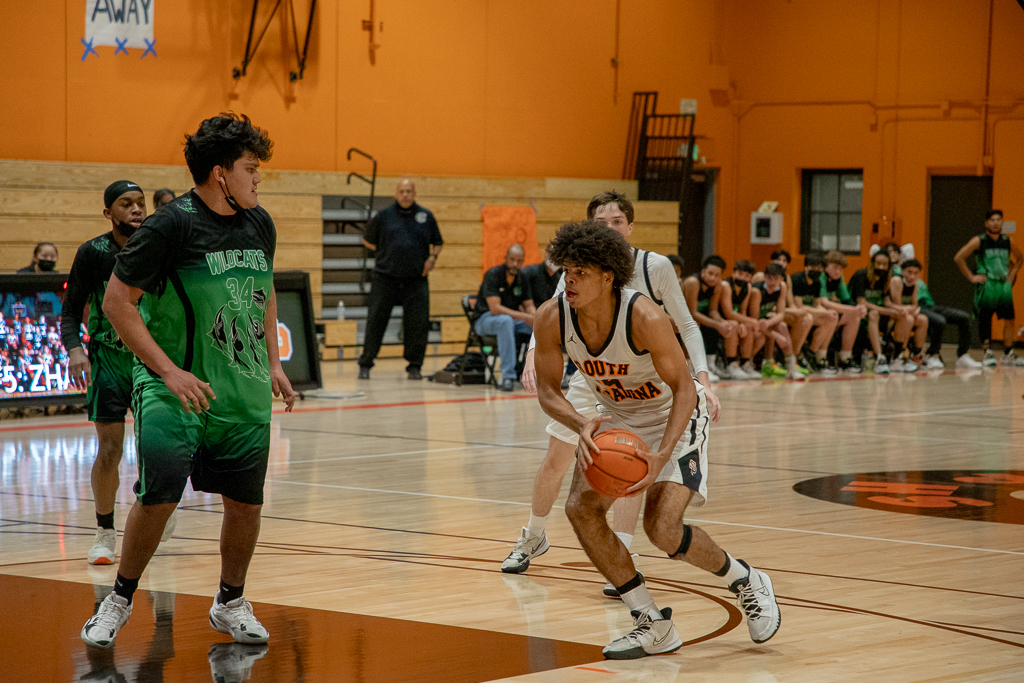 The Tigers now have a 5-1 league record, putting them second in the Rio Hondo League.

Boys basketball defeated the Monrovia Wildcats 63-46 in an eventful Rio Hondo League matchup on Wednesday, Jan. 26. While both teams played well, the relatively close margin came as a disappointment for the Tigers.

Right from the tipoff, the Wildcats were formidable opponents, stopping numerous Tigers from scoring points. Even though senior Dillon Akers scored two foul shots, the Wildcats sailed past the Tiger’s defense for a two-pointer. But the Tigers maintained court dominance with seniors Ezekiel Pannell and Sage Wayans landing three-pointers. The Wildcats continued scoring as they landed a two-pointer and both foul shots, bringing the score to eight apiece. The Wildcats were able to surpass the Tigers quickly, scoring two consecutive two-pointers and swatting balls out of the Tiger’s paws,  preventing them from scoring.

South Pas stayed at the eight-point mark for the majority of the first quarter. Then, in a rare moment in control of the ball, Akers scored a smooth three-pointer, with an assist from Wayans. With only 20 seconds left, South Pas seemed content with their 11 points, until Akers sailed past the Monrovia defensive line and landed a two-pointer as the buzzer sounded.

By the end of the first quarter, the game was close with the Wildcats holding on to 15 points compared to the Tigers 13.

Quarter two began the building of Tiger strength. The tide began to turn when Akers landed two free throws, tying the scores. Monrovia also continuously missed the high-scoring shots that they landed in the first quarter. Akers remained a high-scoring player, landing another foul shot and a two-pointer bringing the Tiger tally to 18 while the Wildcats stayed at 15.

Although the Wildcats continuously intercepted Tiger passes, the Tigers also had bright moments of interception. Junior Nick Chabot was one player who consistently intercepted incoming Wildcat passes and helped his teammates score. In one case, Chabot’s quick pass to Akers ended in a three-pointer, tipping the scales in the game. Chabot also scored points of his own, sinking a three-pointer.

But Monrovia matched these shooting strategies, landing multiple shots in the back half of the second quarter. By the end, the Tigers had crawled one point ahead of the Wildcat’s 23. Although they were in the lead, the Tigers needed to ramp up their defense and aggression to thwart the Wildcat offense.

Monrovia started the third quarter with the ball and seemed poised to thoroughly overtake the Tiger lead, scoring six points in the opening minutes. However, the Tigers regained some strength and Wayans dunked on the basket but Monrovia promptly scored again. Wayans, with an assist from Akers, scored a two-pointer. Monrovia continued their wrestling but Akers broke free to score another two-pointer, bringing the score to a 30-30 tie. 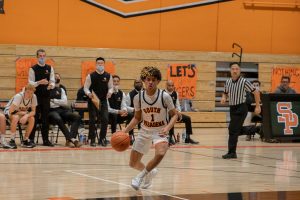 The last four minutes of the third quarter were a stalemate, with no team surpassing its 30-point total. With two minutes left, Monrovia and senior Jonathan Guy scored three-pointers, evening the tallies to 33 apiece. Additionally, freshman Sebastian Martinez sank his two-pointer. Senior Niko Lawrence scored a two-pointer and he and Akers also succeeded in their foul shots, bringing the end of the third quarter scores 41 for the Tigers and 35 for the Wildcats.

The gap began to widen during the fourth quarter. Seconds into the game, Guy lands a two-pointer, followed by a Wildcat two-pointer. Dashing across the court, Chabot returned to score a three-pointer. Guy landed a smooth three-pointer from halfcourt. Wayans attempted a fast break but ultimately did not succeed in his two-point shot.

With a minute left in the game, the Tigers began a mass player rotation, switching all five players on the team for some second string-ers. The new team had ample time to show their strengths, with senior Nick Salazar landing a smooth two-pointer, bringing the final score 63-46.

“It was a good game. We had a pretty bad first half. Only being up one was not good at half time. The fourth quarter came around and we really picked it up as a team, we started executing better.” Chabot said, “We need to go into Blair and get our momentum back before La Cañada on Monday. We really need to win that if we want to split league or even win it.”

The Tigers will face off against the Blair Vikings in a home game on Friday, Jan. 28.