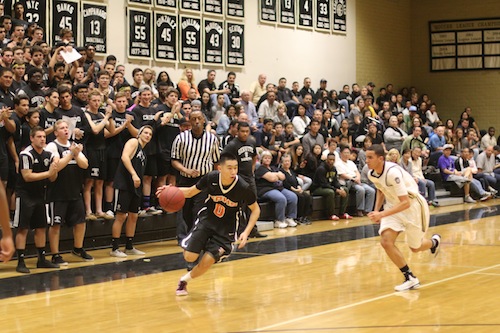 Nobody expected the game played by the boys’ basketball team against Anaheim powerhouse Servite High School on Friday, February 20 to be nearly as close as it was. The Tigers dominated the first half of the game with a passionate student section that cheered them on. The Servite Friars came back in the second half, however, and eventually took the game with a score of 68-59. Tonight’s loss eliminates the Tigers from the playoffs.

Despite Servite’s intense student section, The Asylum, the Tigers blocked out the noise and pressure and came out on top in the first quarter. Senior point guard Joey Toyama opened the game up with three consecutive threes, putting the Tigers up 9-1. Senior Christian Lee sank a bucket from beyond the arc as well, which led the Tigers to a 12-5 lead. The Friars began to score two quick baskets, but the Tigers stopped this momentum shift with a three from junior Greg Luck. For the rest of the first quarter, the game was a back and forth between the student sections and the teams themselves. The quarter ended with the Tigers up 20-16.

In the second quarter, Luck had a vicious block on a Friar shot, and senior Darren Tom drew a charging foul. Lee answered to a Friar midrange jumper with a clean three. Toyama continued the Tigers’ attack with an aggressive layup. Servite took a timeout after the Tigers brought their lead to 27-18.The Friars came out of the timeout playing well, and brought the score back to 28-23. The towering Servite players big men consistently grabbed offensive rebounds, which gave the team ample opportunities for additional shots. Toyama brought the Tiger crowd back to their feet with a three. Luck did the same, putting the Tigers up 25-34. As the half ended, the Tigers were in the lead 34-28.

Toyama began the second half with another three. The Tigers found creative ways to get the ball to the outside, but also maneuvered  around the Servite defenders in the paint. Junior Raymond Arismendez hit a three, and the Tigers, up 42-33, called a timeout. During this timeout, the Friars constructed another comeback attempt. When play resumed, Servite closed the gap to  two points. The Friars took their first lead of the game off of a pair of free throws, which put them up 44-45. Sophomore Stone Franco hit a pair of clutch free throws to put the Tigers back up, but the Friars answered right back with a towering layup. Lee hit another three, along with Toyama, and the Tigers closed out the third quarter leading 52-47.

The Friars hit too many shots in the fourth quarter for the Tigers to handle. An early three and consistent rebounds on both ends of the court put the Friars up, and Servite began to pull ahead. Once up 62-57, they wouldn’t look back. Servite iced the clock on every possession, and the Tigers had very little time to work with. The clock hit zero and the Friars clinched the 68-59 victory.

After the game, a verbal altercation between South Pas students and Servite campus security took place outside the gym. The students were unknowingly standing on Servite’s crest, which prompted Friar fans to command South Pas students to step off. However, the Tiger fans did not comply and were forcefully escorted off campus by security.