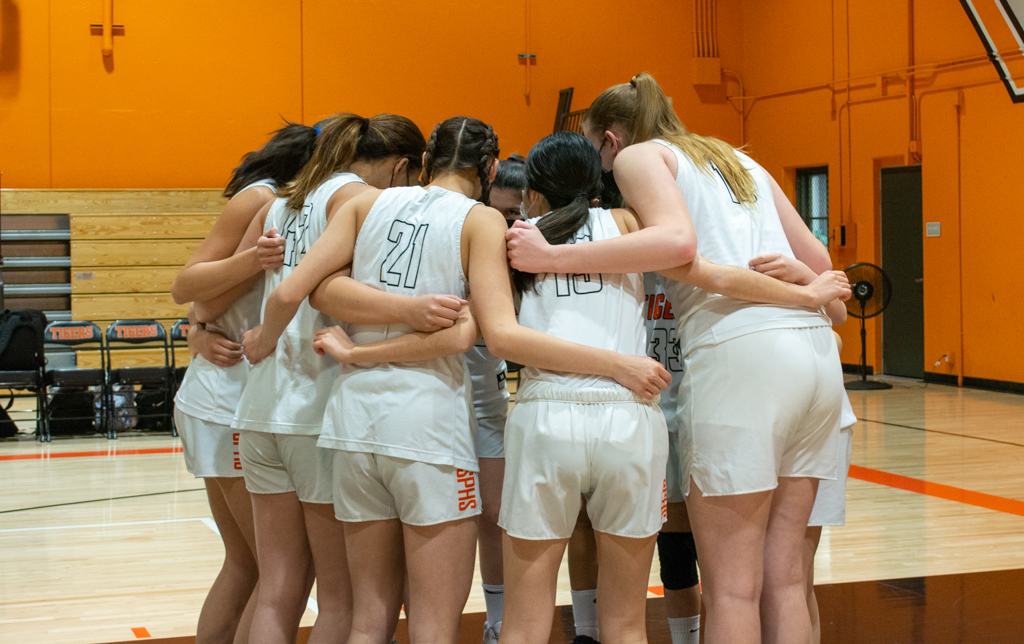 The Tigers hope to defeat the Blair Vikings in another league game on Friday, Jan. 28.

Girls basketball demolished the Monrovia Wildcats 84-20 in a league match on Wednesday Jan 26. After the unbelievable win, the Tigers stand at an overall record of 19-1, and an undefeated 5-0 league record.

The Tigers jumped to an early lead in the first quarter, using their strong defense to deflect Monrovia’s passes, causing the Wildcats to only score once in the entire quarter. Meanwhile, South Pasadena’s offense dominated right off the bat, with senior forward Allysan Tse scoring five times in a row as she charged down the court, dodging the Wildcats’ defense with ease. The Tigers frequently disoriented the other team with quick passes, resulting in an incredible lead of 26-2 at the end of the first quarter.

Monrovia kept floundering in the second quarter as the Tigers continued to turn up the heat. The Wildcats struggled to keep up with the fast-paced offense, and were quickly crushed with a score of 45-7 at the end of the first half as they struggled to keep up with the fast-paced offense. Though there were more intense skirmishes over the ball, the Wildcats continued to stay several steps behind. After nearly a full minute of back-and-forth, junior small forward Lotis Shoun took the ball down the court, sinking a 2-pointer completely unopposed as Monrovia was left in the dust.

By the third quarter, it was not a question of if South Pasadena would win, but by how much. The answer quickly proved to be “by a lot,” as within the first 20 seconds, Tse scored two 2-pointers and senior small forward Alyssa Chan quickly followed with a 3-pointer, leaving Monrovia unable to keep up. The Tigers sank shot after shot, many of which went without any intervention from Monrovia. South Pasadena completely outpaced their opponents, creating an impossible lead of 73-9.

Monrovia finally decided to make a comeback in the fourth quarter, but by then it was too little, too late. The Tigers could have coasted on the success of the previous quarter, but instead, they continued to make impressive shots from corners or half a court away, continuously dodging the Wildcats’ last-ditch efforts. Sophomore shooting guard Olivia Alfonso sank a 3-pointer to end the game at 84-20.

The Tigers will next challenge Blair at a home game on Friday, January 28 at 5:15 pm.