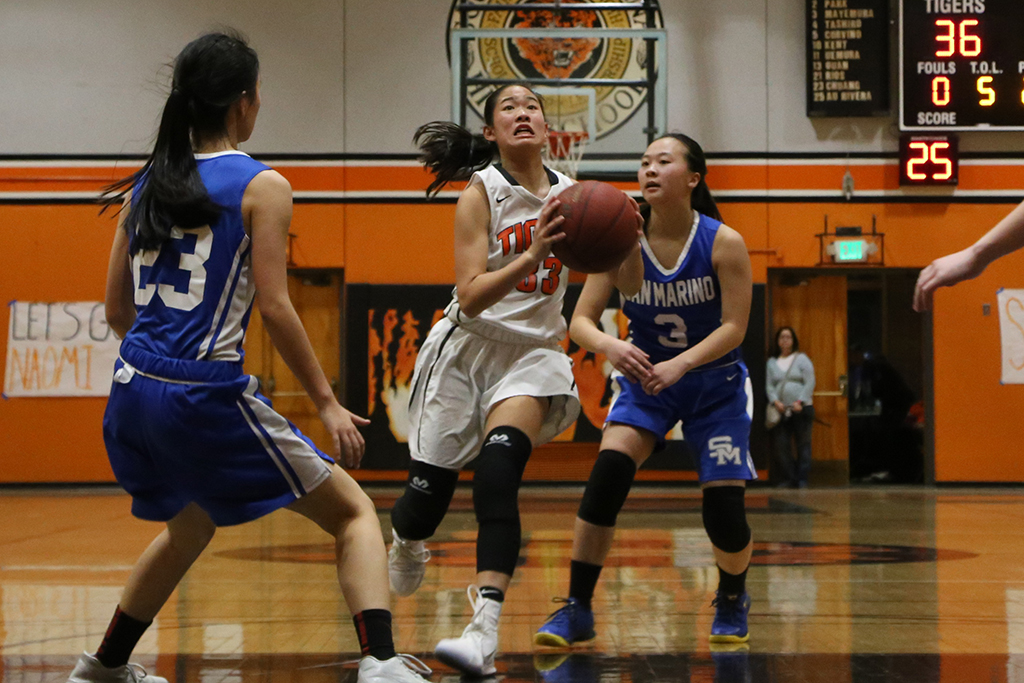 Sophomore Megan Yee drives towards the basket with ease, as the Tigers rolled the Titans. The win boosts South Pasadena's record to 5-2 in league.

Girls’ basketball reigned supreme again on January 31, in a 67-49 victory against its rival, San Marino. This is the Tigers’ fifth league win in the season, putting them at a record of 5-2 in league.  The team was greeted by a boisterous crowd that was already roaring when the Tigers tipped the ball to San Marino at the start of the game. Though the Tigers struck first with a shot by senior Tiffany Holmes and two free throws by junior Lauren Kafkaloff, something was noticeably wrong with the Tiger’s offense in the first part of the game. Their passing game was strong but were unable to sink a shot in the basket for several nerve wracking minutes, and soon, the Titans scored a three-pointer that put them dangerously close to the Tigers. However, back to back baskets from Holmes after skilled passes from sophomore Charlize Kruzic and senior Naomi Kruzic. Once the team regained their rhythm, the game quickly turned in their favor, and at the end of the first quarter, the Tigers lead 15-3.

The Tigers began their next period aggressively and had a foul called on them in the first six seconds of the game, but fortunately, this call had no effect on the score. The Tigers continued with the momentum that they had built by the end of the first period with strong, lightning fast passes that slipped past the Titans defense before they could realize what had happened. However this time they put more focus on accuracy while shooting. Sophomore Megan Yee shot particularly well with  multiple three-pointers. Other team members proved to be lethal at a long distance and sophomore Sydney Sakamoto’s three-pointer brought the Tigers to a 33-13 lead at the end of the first half.

In the third period, the Tiger’s continued their relentless attack, with the team obliterating San Marino inside and out of the paint. South Pasadena increased their lead throughout the quarter and soon lead by 24 points. In the tail end of the game, the Titans made an attempt to come back, but it proved to be too little too late. The Tigers emerged victorious with a score of 67-49, mauling the Titans by 18 points.

After three back to back wins, the Tigers look for redemption at home against La Cañada on February 2nd.