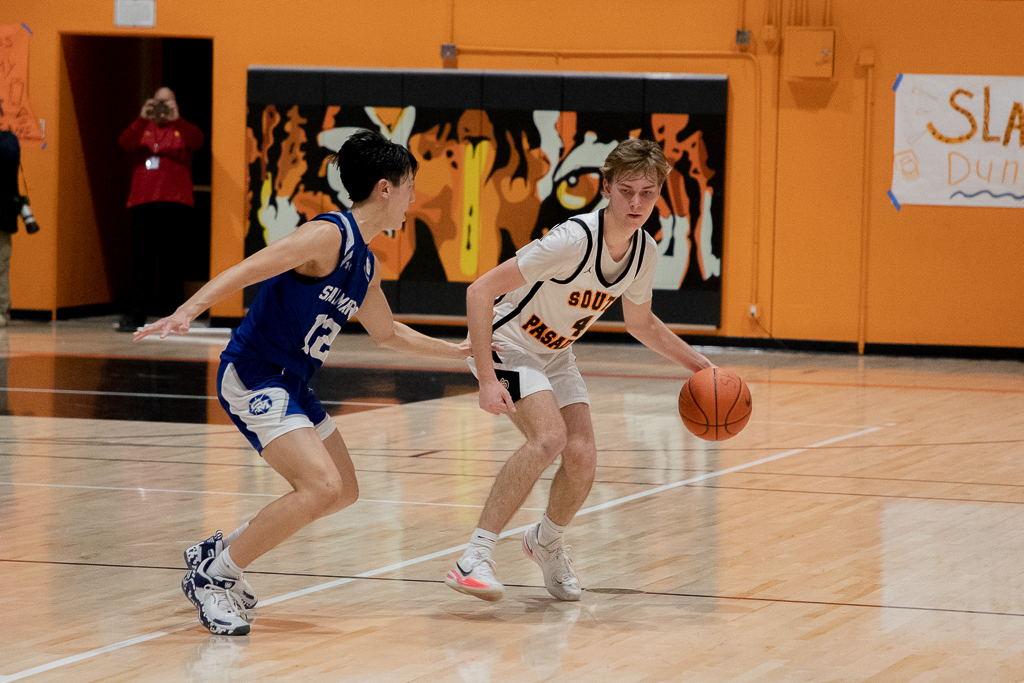 Boys basketball demolished the San Marino Titans 63-49 in their highly-anticipated Rio Hondo matchup game on Wednesday, Jan. 19. The Tigers’ passionate gameplay suited them well with a couple of standout players keeping control throughout the whole game.

Rivalry hung through the air as Tiger supporters roared in the stands while the players shuffled onto the court. Senior Sage Wayans took his position as the center, preparing for the tip-off and a tenuous match.

The Tigers got off to a rocky start, as they could not maintain a rhythm while the Titans continually snatched the ball. The Tigers would often make difficult shots, only to narrowly miss or be intercepted by the Titan’s agile front lines. The Titans were able to score a quick three-pointer; Wayans started and passed to senior Dillon Akers but was fouled on the play. This was a common theme throughout the first period; the Tigers would use their brute force in an attempt to gain control but would rack up fouls leading to Titan free throws instead.

If one was to categorize this game based on a single player, it would be the Game Of Guy. That is not to say there were not impressive performances from other players, including Akers, senior Niko Lawrence, and Wayans, but senior Jonathan Guy lit a fire on the court that never wavered.

Guy dashed down the court and set his sights on the hoop. With not a second to waste, he shot the ball to score a two-pointer. As the first period came to a close, the Tigers were trailing the Titans 7-12.

The second quarter was one of momentous intensity as the Tigers upped their risky shots, only occasionally being successful. The beginning seemed dire for the Tigers, staying at their stagnant seven points as the Titans scored a foul shot and a three-pointer. Guy received the ball after a rapport with freshman Oni Balogun and overshot his attempt at the hoop. Wayans burst into the key, landed a two-pointer but his impending foul nullified the points. Court aggression increased with many players accumulating fouls by wrestling the ball out of the Titan’s hands.

When the crowd shouted defense, the Tigers took note. An equally adept defender, Guy stretched his arms and legs to overpower the Titans. Despite these strong defensive plays, the Titans continuously positioned themselves in favorable shooting spots. These spots led them to a promising lead for most of the second period, as they continued to maintain control, landing two-pointer after two-pointer to bring the score into the 20s. Then, Akers bolted down the court and scored a three-pointer off of a clever interception by junior Nick Chabot. This, combined with Guy continuing to ace his free throws brought the game to a tie with 21 apiece, as the  Titans also landed a free throw. When Wayans landed his foul shot, that put the Tigers over the edge with 22 points.

As the game clock on the first half ticked down, the Tigers tried to land a comfortable lead by attempting risky three-pointers that missed. By the end of period two, the Tigers were content with their one-point lead, 22-21. 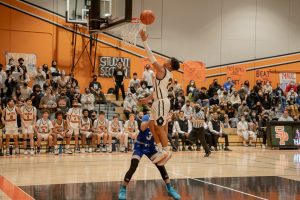 Seconds into the third, Guy scored a two-pointer, symbolizing the turning tide in the Tigers favor. Immediately following Guy, Akers landed himself a two-pointer bringing the Tiger tally to 26 points. With every successful basket, there were a dozen long-shots that narrowly missed or were fumbled out of existence.

San Marino scored a two-pointer, three-pointer, and multiple foul shots but that was not enough to match the Tigers’ gutsy moves. Freshman Sebastian Martinez made a two-pointer by overtaking a Titan turnover and charging down the court solo. Guy also made a two-pointer during the third period and assisted his teammates in their pointage, bringing the score to 37-25, a substantial Tiger lead.

Another benefit for the Tigers was the almost constant rotation of players. No one got stale on the court and it allowed other players to shine. Junior Finny Ho’s third-quarter three-pointer, with an assist from Guy, clinched the game for the Tigers.

Quarter four began with San Marino promptly scoring a three-pointer, refusing to let the Tigers coast by on their 10-point lead. Chabot and Akers had both missed their three-pointer attempts, but senior Niko Lawrence successfully landed a two-pointer. Akers later scored bringing the Tiger total to 51.

San Marino was up to the task, however, and scored two consecutive two-point shots. Chabot also made a comeback scoring, immediately followed by an Akers and Martinez basket. Before the end of the game, the Titans landed a three-pointer, but the Tigers managed to garner 19 points in the fourth period, securing them a well-deserved 63-49 win.

“[The game] started off not the best, but we stuck with it like we always do. We’ve had a lot of up and down games. That’s our best trait is our resilience. [We] just need to get comfortable playing in an atmosphere like this,” Guy said. “It’s been a year and half, two years since we’ve had a crowd. That makes a big difference. San Marino is a rivalry. They bring their people and we bring ours. [I’m excited for] more games like this.”

The Tigers return to challenge the La Cañada Spartans in an away game on Friday, Jan. 21.