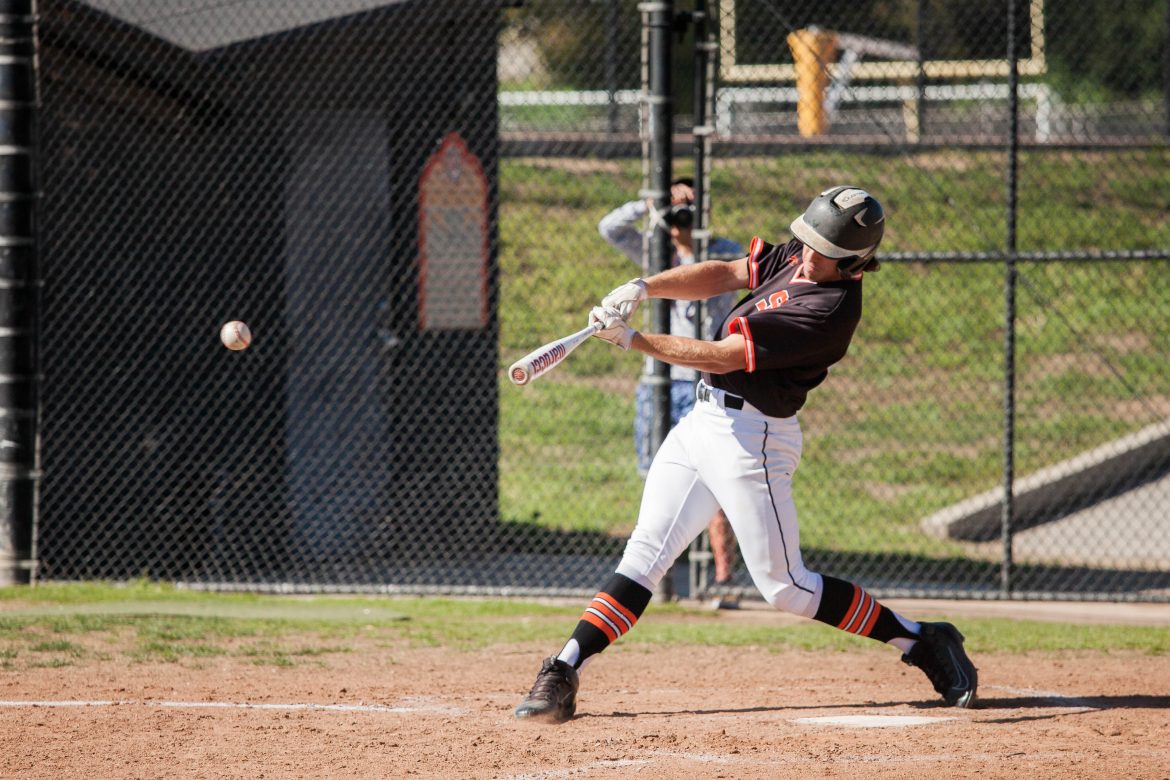 Senior Dylan Benton drove in a run on an RBI single during the Tigers' two run first inning.

Boys’ baseball fell to the rival San Marino Titans on Friday, March 15. Although jumping out to an early lead, poor defense and inconsistent batting proved to be South Pas’ demise.

Senior Noah Parker took the mound and was faced with early trouble. Understanding Parker’s reputation as a control pitcher, the Titans came out swinging at early pitches, hoping to get lucky with a fastball in the zone. The visitor’s game plan worked initially, as a single, error, and a grounder skimming just fair within the third base line loaded the bases for the Titans. However, the Titan’s overaggressive approach also caused them to put bad pitches in play; as a result, San Marino was unable to cash in any runs.

The Tigers responded by loading the bases themselves in the bottom half of the inning through a pair of walks and a hit batter. Hot hitting Parker would help himself with an RBI single and senior Dylan Benton would double the lead the next at bat with a single himself. Although a double play prematurely ended the inning, the Tigers had drawn first blood and shifted the momentum in their favor.

However, the Titans wouldn’t take long to respond, as they returned with vengeance in the third. After scoring a run on a sacrifice fly, the Tigers committed another error to prolong the inning. This time, San Marino capitalized with a three-run homerun, propelling the visitors to a 5-2 lead. The Titans would continue to square up pitches, and the inning dramatically came to a close with a great defensive effort by senior center fielder Savian Joseph.

Instead of mounting a comeback in the fourth, South Pas would enable the Titans to expand their advantage. A pair of singles and yet another Tiger defensive mishap kept the inning alive and allowed San Marino to score two more runs.

The inconsistent Tiger offense was effective for a short period in the fifth, as South Pas got one run back off of a deep RBI single by senior Adam Schroeder. However, San Marino would tack on five more runs in the fifth and sixth en route to a commanding win.

A combined five errors from the Tiger infield and outfield not only led to unearned runs, but also caused pitchers to lose confidence in their backline. Additionally, South Pas was only able to muster up five total hits against a 2-7 overall Titan team.

The Tigers will play next on Tuesday, March 19 at 3:30pm at home against the Monrovia Wildcats. In their previous matchup, the Tigers narrowly fell 6-5 after conceding five unanswered runs to close out the game.