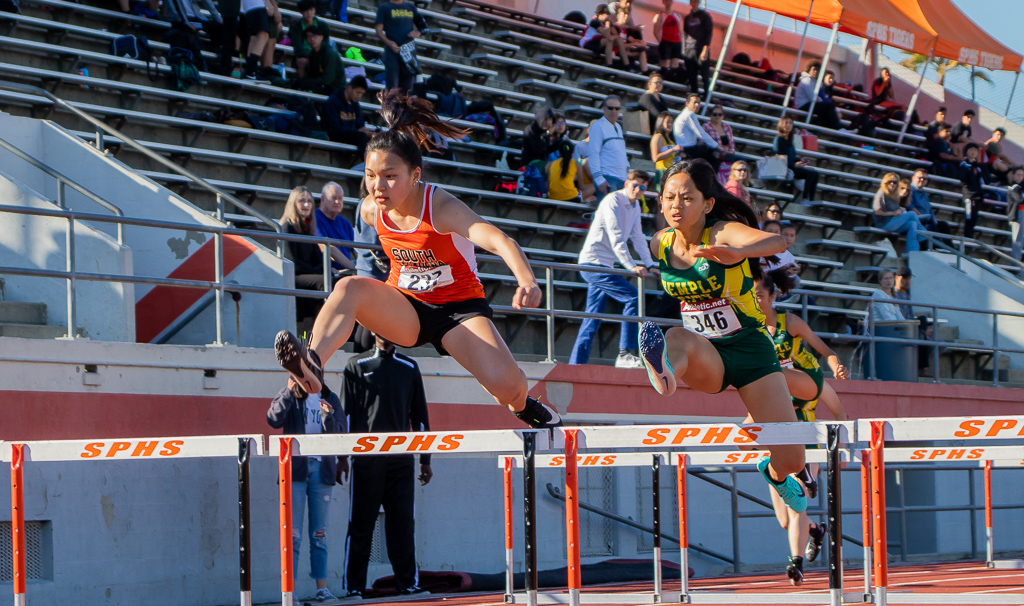 Sophomore Michelle Jee leaps over a hurdle in the girls' 110m hurdles. The Tigers easily defeated the Rams in the vast majority of events in their first league meet.

The SPHS track and field team continued its dominance of the Rio Hondo League against the Temple City Rams, winning 93-33 in the boys’ division, and 85-28 for the girls’. South improves to 2-0 in dual meets this year, and will aim to go undefeated in league meets as they have always done under Coach C.B. Richards.

Senior sprinter Christina Taylor dominated the girls’ 100 meter race, blowing out the field with her season record time of 12.9 seconds. For the boys’ sophomore Ferrel Mansano set his personal record with a 11.59 second run to take first in the 100. Senior Kai Dettman ran a 50.53 to win first in the boys’ 400 meter race.

Although the girls’ team was unable to outrun the Rams in the mile, senior Nicolo Porcu ran a 4:52.94 mile to narrowly take first place for the South Pas boys’ team. A 4:23.27 time from juniors Gianna Beasley, Sophie Garcia, Avery Kim, and Emily Newhall won first in the girls’ 4×400 relay.

A select portion of the team will compete today, Saturday March 16th, in a Covina qualifier meet, but the entire team will face off next @ La Cañada on Thursday the 21st in a dual meet.