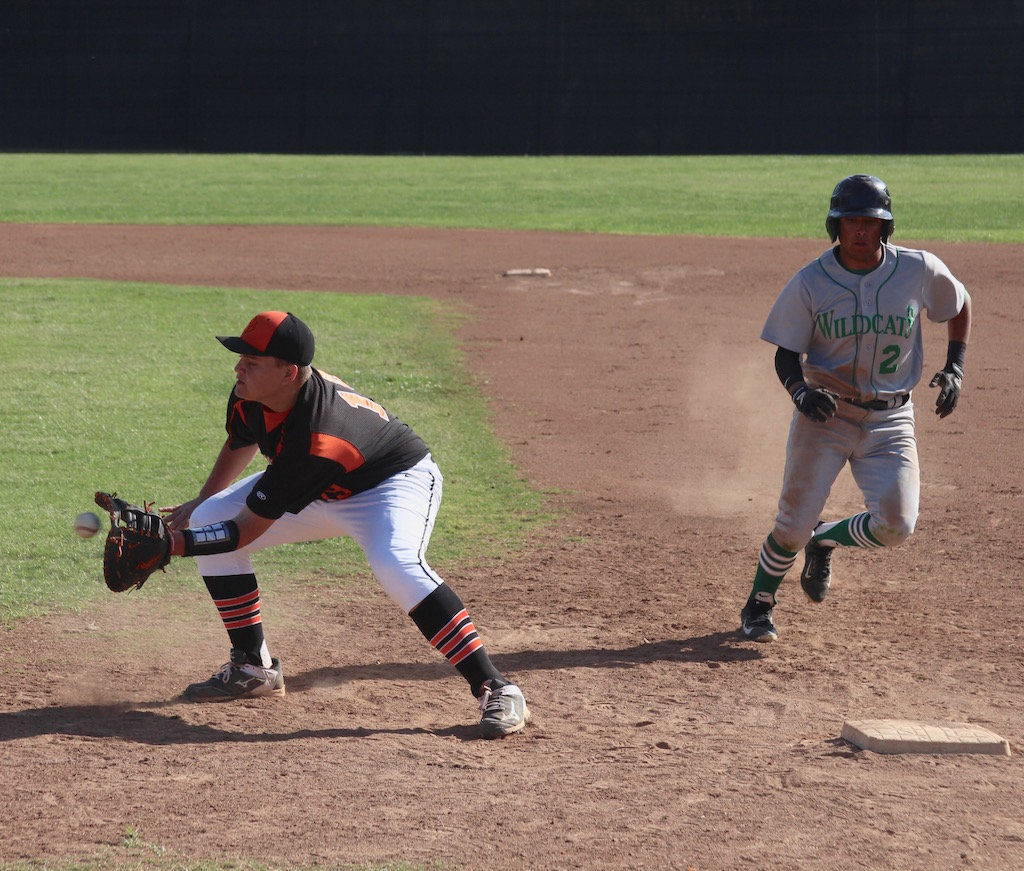 The baseball team suffered a heartbreaking, ten-inning 3-5 loss against Monrovia at home on Tuesday, March 22. Their record is now 0-2 in league and 8-4 overall.

Last year, Monrovia finished in first place, undefeated in league, while South Pasadena finished last. This time, however, the Tigers would not go down without a fight.

On the bump for South Pas was junior Kevin Park. The Wildcats took an early lead in the first with an RBI single, putting them up 1-0. In the second, the pressure continued when Monrovia managed to put runners on second and third. Park stepped up by striking out two batters and picking off the runner at third to escape the inning, unscathed. The Tigers fought back with a single to left from senior Brandon Louie. A strategic bunt by sophomore Max Smith advanced Louie to second, followed by a wild pitch, which moved him to third. After being hit by a pitch, junior Jacob Luevano stole second, inducing an error by the Wildcat catcher with a wild throw to second, which allowed Louie to score. The inning would end tied up at 1-1.

In the top of the third, the Tiger defense faltered with an error, allowing runners on first and second. With only one out to go, Park kept his cool and struck out the batter with a fastball to escape the inning. Now, Park stepped up to the plate, and he singled to left. Park then got to second after a bunt from sophomore Matt Walker.  Senior Connor Dolan then hit a single, putting runners on first and third. Louie was up to bat again, and narrowly missed a homerun with bomb just slightly foul. Still, Louie managed to walk, loading the bases for the Tigers. However, South Pas failed to score after groundout that dissolved the inning.

Monrovia came out strong in the fifth, scoring two runs to take a 3-1 lead. Sophomore Jackson Totleben responded for the team with a RBI double. In the sixth, sophomore Isaac Luevano walked. The Monrovia pitcher proceeded to baulk and then throw two wild pitches, allowing Luevano to score. Senior Matthew Shults followed this up with a strong double, but was not able to be batted in, leaving the game tied at 3-3.

For the next four innings, the teams were at a stalemate. They fought back and forth, but neither team could manage to score. The teams were racing to strike first to break the tie, and Monrovia succeeded. In the tenth, the Wildcats score two runs, and the Tigers were unable to reply. The game finished in a 3-5 loss for the South Pas boys.

Despite the loss, the team put up a strong performance and proved its potential. South Pas hopes to translate this potential into a win against its school rival at San Marino High School on Friday, March 25.