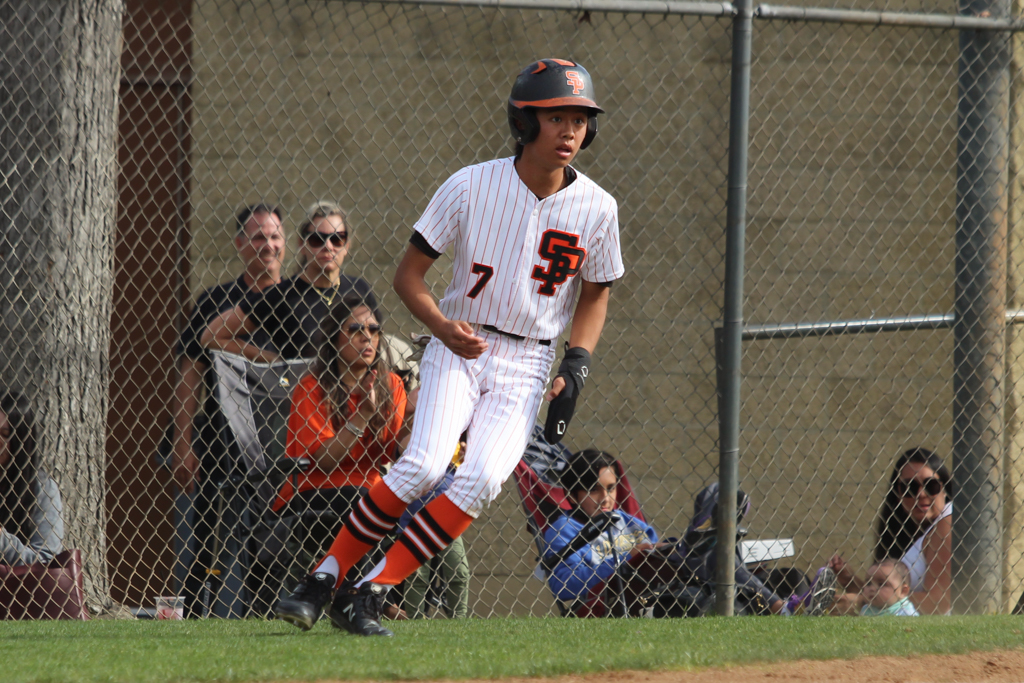 The Tigers will play their next league game against the Temple City Rams on Thursday, April 4.

Baseball won against the San Marino Titans this Friday, March 25. Supported by dominant pitching from senior Alex Hodis and strong hitting, the Tigers maintained their early lead and won the game 6-1. This marks the team’s fourth consecutive league win this season, leaving them in second place in league with a 4-3 record.

South Pas started the game strong with walks by seniors Jack Riffle and DJ Pearson. Junior Quinn Stirling followed with a productive out, allowing Riffle and Pearson to each advance one base. Junior Ivan Becerra then walked to first, but all three runners were stranded on base as no runs were scored.

Hodis pitched well from the start of the game, striking out two San Marino players and preventing any runner from advancing beyond first. Sophomore Luke Riffle supported him with strong defense in the outfield, getting the final out of the first inning.

The Tigers became more aggressive in the second inning, with junior Jason Yipp hitting a single on the first pitch of the at bat. Yipp then stole second, giving sophomore Nolan Adams an opportunity to drive him home. He did just this: crushing a ball to right field and trading places with Yipp, who scored the first run of the game.  A bunt single by L. Riffle put him on first and allowed Adams advance to third. J. Riffle was up next, and L. Riffle seized this opportunity to steal second. After two balls and a strike, J. Riffle hit a double, bringing Adams and L. Riffle home.

Two consecutive errors in the infield let San Marino score their first run of the game in the bottom of the second inning. Becerra and Adams helped limit the damage, back-picking a San Marino runner. Hodis continued to display strong pitching, striking out two more Titans.

The Tigers didn’t score in the third, though they continued to hit the ball hard. Sophomore Devin Robinson hit a deep lineout, which San Marino’s center fielder tracked down at the wall. This was followed by a single from Yipp and a groundout by Adams after Yipp stole second. However, the rally wouldn’t produce any runs.

Hodis and Adams continued to shine on the defensive front, keeping the bottom of the third scoreless for San Marino. South Pas dominated in the fourth inning, with L. Riffle leading off with a walk. J. Riffle hit a deep flyout to the warning track, which allowed L. Riffle to tag up  to second. Pearson followed, hitting a single scored by L. Riffle as the Tigers’ fourth run. Hodis kept the bottom half of the fourth short, supported by multiple catches in the outfield. The inning was over with no runs for San Marino after a groundout to the pitcher.

Senior Joe Kazarian started the fifth by getting hit by a pitch, and stole second just before Robinson grounded out. He then advanced to third, and scored the Tigers’ fifth run after Yipp brought him home with an RBI groundout. Adams then walked, but no more runs were scored.

Yipp played well as a centerfielder, catching a lineout to center to support the Tigers’ defense. Hodis continued to baffle San Marino hitters, using an overpowering fastball and wicked curveball to keep the Titans off balance and off the scoreboard.

The sixth inning saw the Tigers continuing to dominate against the Titans, starting off strong with a triple by J. Riffle. Pearson followed with a ground ball, but J. Riffle was thrown out at home. Pearson advanced to second on the play and then stole third, which was shortly followed by an RBI single from Stirling. Becerra was up next, and Pearson used this opportunity to score the Tigers’ final run.

No runs were scored for either team in the seventh inning, though senior Lucian St Vaughn and juniors Jack Holley and Ben Petrillo were substituted into the game and showed their offensive contributions. Hodis continued to  propel the  Tigers to victory with excellent pitching throughout the entire game. The Tigers finished the game with a 6-1 win, a wire-to-wire victory against their rivals.

“I think I just threw a lot of strikes and let them hit the ball [and] got a lot of outs. I wish I got more strikeouts. We definitely [struggled with] errors; that’s what cost me the game shutout, which kind of sucks because I wanted that,” Hodis said.

After pitching a complete game with a dominant, nearly-spotless performance against San Marino, Hodis placed his glove on the ground and pretended to adjust his tie in celebration.

The Tigers will play their next league game against the Temple City Rams on Thursday, April 4.