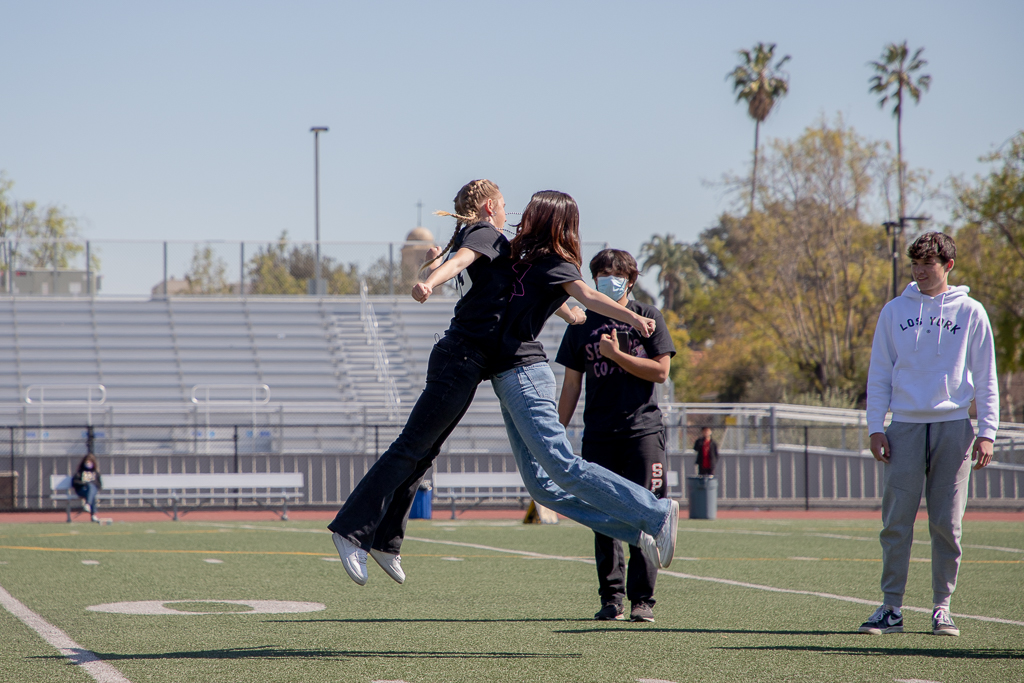 ASB's spirit assembly before the annual Powerpuff game encouraged students to attend the match-up between SPHS juniors and seniors.

ASB got students excited for the upcoming game at the annual Powerpuff spirit assembly on Friday, Feb. 25. ASB held the event on the football field with students separated by grade level, to accommodate current coronavirus health and safety guidelines.

Commissioner of Assemblies senior Andrew Kowal opened the assembly with roll call and by introducing junior Lauren DuBria to sing the national anthem. Kowal continued with several class competition to hype up the annual Powerpuff game that night. The Powerpuff game is a flag football match between junior and senior girls, a long-held tradition at SPHS.

Kowal tested players from both Powerpuff teams on their football abilities and, ultimately, the juniors took the victory. Next, Kowal introduced the Tiger Take, a skit where three “sports analysts” argued and joked about which team would win the Powerpuff game.

Pep’s Varsity Flags performed next, before Kowal began another class competition between all grade levels. Class representatives participated in a scavenger hunt where the seniors took first place.

Kowal continued to promote the upcoming game by interviewing players from both teams. The juniors challenged the seniors’ long-held winning streak, though the seniors were confident in their abilities to take down the junior team.

Kowal closed the assembly by reminding his fellow seniors to purchase tickets to Grad Night at Disneyland’s California Adventure on Saturday, June 4 and encouraging students to attend the Powerpuff game, which the senior girls ultimately won 20-6.