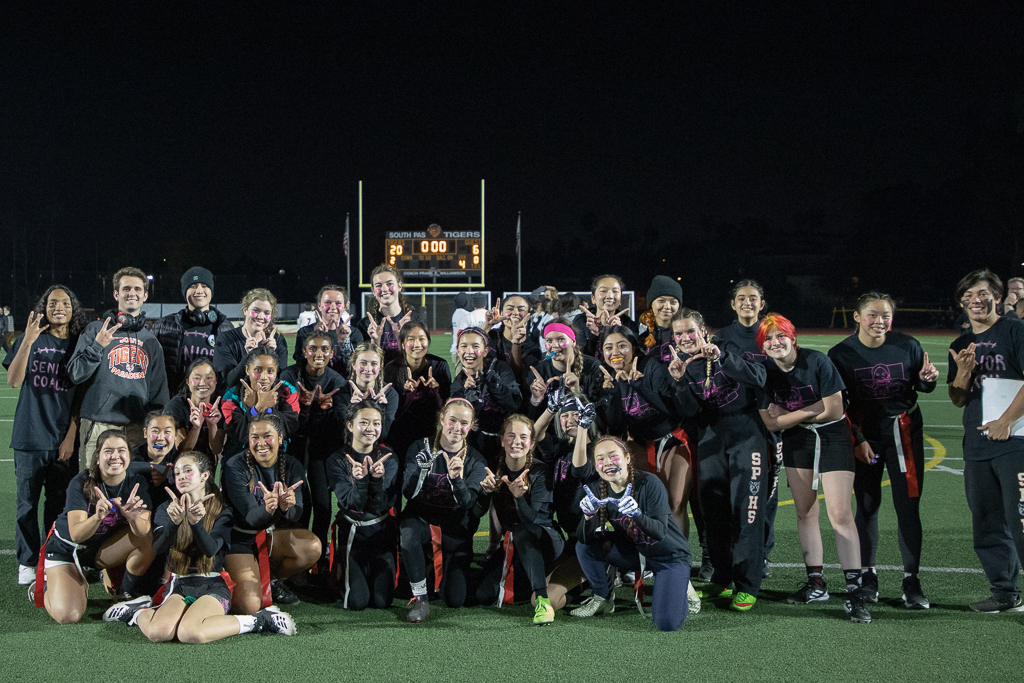 Within 14 seconds of the first quarter, junior Amaris Franco almost came to a touchdown, but slid out of bounds, just short of the endzone. Senior Commissioner of Athletics Skye Harris flew through the junior defense making a touchdown, but a flag pull earlier on made the play invalid.

The juniors pushed the seniors further back, dodging flag pull after flag pull, and a swift  Francotouchdown set the juniors ahead at 6-0. The juniors continued to push with offensive plays but were cut short when senior Ava Feldman went in for a tackle. Traditionally, seniors lead by a huge margin at this point in the game, but the Class of 2022 lacked experience they would have earned at last year’s game which was canceled due to coronavirus restrictions. Both teams came into this game on the same experience level, making it a tough match. 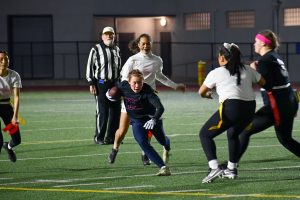 The seniors made a comeback in the second quarter, starting off with an impressive steal by Harris. But a senior false start gave the Class of 2022 a five yard penalty. After a time-out and aggressive offensive plays from the juniors, senior Monet Cajayon cut off the offense and bridged it to a touchdown.

Harris finished off the play with a successful extra two points. The juniors kept on fighting with a pass complete to junior Peyton Washington, but their efforts fell short to the senior’s dominant defensive line. By halftime, the seniors were ahead with a score of 8-6.

Even without a halftime show, both classes made an explosive comeback onto the field. Just moments into the third quarter, senior Abby Garner made an astonishing 59-yard touchdown, widening the margin between the two classes at 14-6. However, as the seniors began picking up momentum, Garner injured herself and was benched for the rest of the night. On the other hand, junior Daniella Lat kept hopes high for the juniors, making aggressive plays and dodging senior defense, but the seniors maintained their lead to the end of the third quarter. 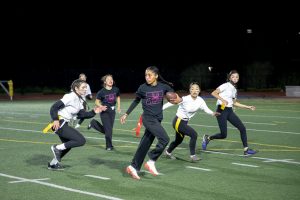 The beginning of the fourth quarter was not as fast-paced, however. False starts and five yard penalties shook both teams. A complete pass from junior Charlie Kami Duffin to Franco turned over the atmosphere as Washington swiftly made it to the 40-yard line. Towards the end of the quarter, senior Ava Dunville intercepted a pass between the juniors and ran it to the endzone, but stepped slightly out of bounds. With tensions high, the seniors bounced back with Dunville making the third touchdown for the seniors. Regardless of a failed extra point extent, the seniors capped off the night with a score of 20-6. At the sound of the buzzer, both teams came onto the field with their fellow classmates dressed in black and white congratulating them.

Both classes spent the weeks leading up to the game practicing strategies and plays, led by some of the varsity football athletes who acted as their coaches for the event. The senior coaches included Jack Riffle, Grant Huntley, and Morgan Seche, while the juniors were guided by Aidan Kinney and Julian Fernandes. 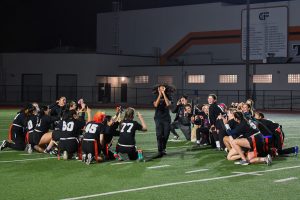 “There was so much energy that was coming from everyone… It was super fun to play with the seniors,” Lat said. “I learned a lot more about football than I thought. We learned like 14 plays. It was fun to learn a little more about the sport.”

The seniors expressed encouragement for the current juniors as they look to compete against the Class of 2024 for the Powerpuff game next year.

“Beat them again.” senior Lauren Calderon said. “Just keep the legacy going! It will always be against the juniors.”

The seniors reflected on their teamwork and legacy at SPHS as they walked away from their first, and last Powerpuff game.

“I played in middle school and loved it so it was really nice to be here and come out with a win with all the girls in my grade,” Dunville said. “We had super fun practices, there was a lot of comradery, we all got along, the coaches were great, it was just really fun, and I always looked forward to all of the practices and getting ready for the game.”

The game was preceded by an assembly earlier in the day led by senior Commissioner of Assemblies Andrew Kowal. The assembly opened up with junior Lauren Dubria singing the national anthem and numerous performances from Pep. The quarterbacks from the Class of 2022 and 2023 went against each other, measuring how far each student could throw a football. Later, a corner titled “Tiger Takes,” consisted of a heated debate between senior DJ Pearson and junior Jason Yipp over who was to claim victory in the game.

All proceeds from the game will support the senior Class of 2022 activities including graduation, baccalaureate, and senior breakfast which will be taking place in the upcoming months.