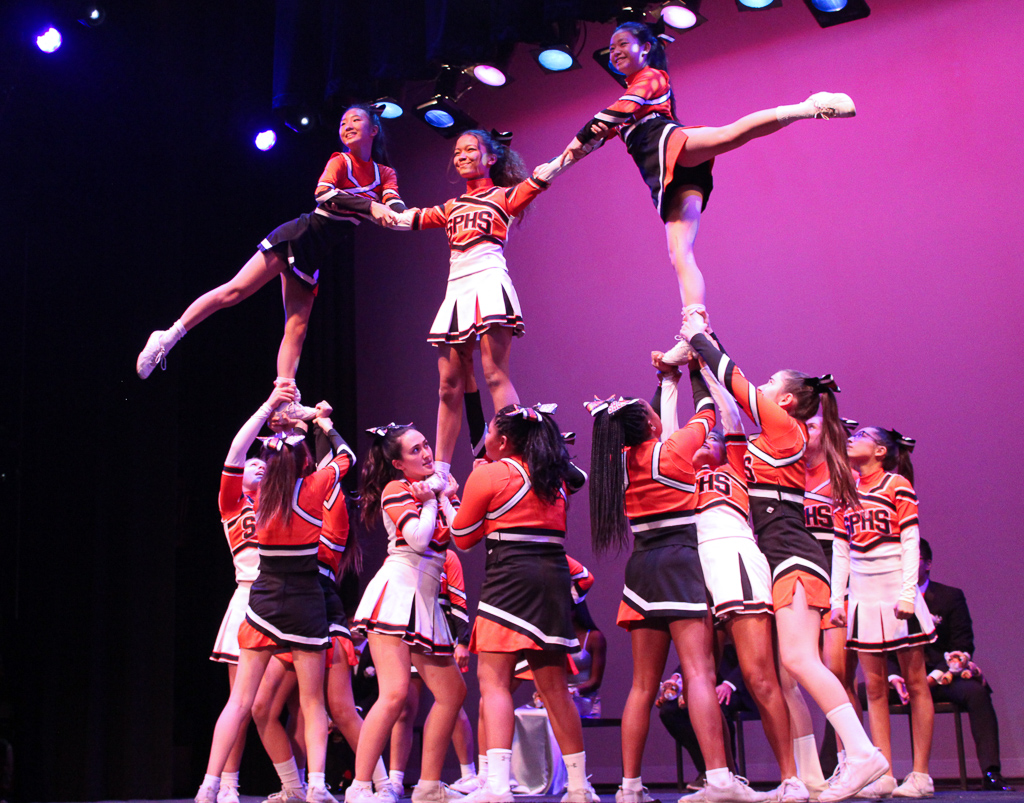 Students packed into the auditorium for the annual Powerpuff spirit assembly on Friday, Feb. 28. A precursor to the upcoming Powerpuff game, the brief assembly engaged the spirit of the student body through creative video skits and introductions of the junior and senior Powerpuff players.

Senior Aanji Sin kicked off the assembly with a performance of the national anthem. Commissioner of Assemblies Evan Kowal then informed the audience of the upcoming prom with a video skit, noting a contest where the first student who correctly guesses the prom location will be eligible for discounted tickets.

Performances by pep’s junior varsity freshman song and varsity cheer teams sandwiched a short presentation by the Commissioner of School and Community Ines Yang. Yang announced the start of the annual Pennies for Patients fundraiser to raise money for Leukemia and Lymphoma Society, a month-long event in March that will pit fourth-period classes in a competition to raise the most money. Yang challenged the SPHS to reach the goal of $6,000 school-wide, which would beat the $4,000 raised last year.

Senior Braden Wong — the new Commissioner of Athletics — made his official debut in the assembly, inviting up the varsity spring sports onto the stage. Wong proceeded to host a short interview with the assembled captains, inducing laughter with the comedic antics of some of the athletes.

Kowal continued the assembly with more announcements and upcoming events like the SkillsUSA mock presidential election scheduled for Tuesday, March 3, voting for the Renaissance Award, and notice for clubs to contact the Commissioner of Academics to be featured in videos for future assemblies.

The competitive dance team, who are due to compete in nationals, also performed their routine on-stage.

The assembly concluded with a highlighted reel of the Powerpuff athletes. Parodying ESPN, the video introduced some of the players for the game, establishing a friendly competitive spirit between the two teams.

“I’m looking forward to the juniors taking the dub and showing everyone all the tricks and plays that we have been practicing for a while,” Lukavsky said. “Our team has really good chemistry and we’ve always played well so I think tonight is going to be really fun and I can’t wait.”

The annual Powerpuff game will kick off tonight on the Roosevelt Field at 7 p.m.