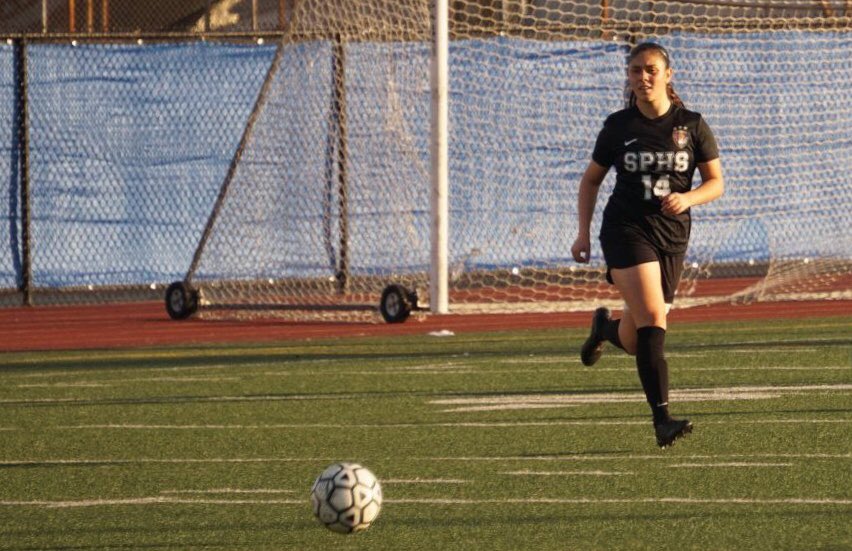 After playing for Necaxa, Castellanos will compete for the South Pas girls soccer team.

Senior Andrea Castellanos’ aptitude in soccer manifested when she was just six years old in her hometown of Aguascalientes, Mexico, but it was difficult to find opportunities for this talent. Girls teams were rare, and while Castellanos’ love for the sport grew, nobody in her family shared the same interest. She had to resort to playing with boys.

“[The boys] didn’t like me at all. They did not pass me the ball, and I had to do things right on the field so they could trust me,” Castellanos said.

The all-boys youth team was formative to Castellanos’ development as a soccer player. She was a natural prodigy, but this was the exact reason why she was kept on her toes. It was not enough to be the best player on a team; Castellanos had to prove time and time again her dedication and commitment to her teammates. In this journey to establish her capability, she became well-acquainted with the strong work ethic that she would carry with her throughout her life.

This hard work would not take long to reveal its results. When Castellanos was 13, she was called to play for Mexico’s U-15 girls national team. This was only a brief stint, however, and Castellanos was recruited for the professional league within a year. At 14, she officially joined Necaxa, a team in Mexico’s top flight league, but her youth provoked a strong response in the team.

“It was hard because I again had to prove myself. They just thought I was a kid because they were older than me,” she said.

Castellanos was the youngest player in the whole league. This fact was not lost on her teammates, who expressed their apprehension at having to play with a girl 10 to 15 years younger than themselves. Whether it be her age or gender however, Castellanos was used to being underestimated. She would use that to her advantage, and when her first professional game occurred, Castellanos found herself being called off the bench.

“I wasn’t even going to play, but a player got injured. Suddenly the coach called me and I was like, ‘Really?’ And we were playing a really good team, one of the best teams in the league,” Castellanos said. “I just couldn’t believe that was actually happening. I won’t say I wasn’t scared because I definitely was. But I just painted the situation in my mind as simple as it was. Just concentrate on the ball, keep it simple and stay in order.”

Castellanos’ debut was a wild success, a memorable performance that caught the eyes of her coach. She began playing as a starter three seasons in, naturally easing into the hectic schedule that came with playing professionally. Traveling every 15 days for games and tournaments, she took the challenge of balancing schoolwork and her career in stride.

Castellanos played in the professional league for multiple seasons before making the transition over to the state team of Baja California. They offered to play her in tournaments in the United States, which perfectly aligned with her plans for the future. As Castellanos grew older, she realized her ambitions to play college soccer and study in the U.S., and it was not long before multiple offers came her way. In particular, Cal State LA and Penn State recommended she attend her senior year in the U.S. before graduating.

In August 2019, Castellanos arrived in South Pasadena. Although fluent in English, she was suddenly surrounded by the language 24 hours a day, and the complete immersion into American culture caused a brief adjustment period in school — but soccer remained a constant.

Castellanos immediately joined the varsity girls team, tackling the field with her usual tenacity. However, the American playing style was more aggressive and physical compared to a more technical outlook followed in Mexico. Castellanos would take frequent falls on the field in this new learning curve, to a point where she was dubbed “The Faller” by her teammates.

This time, however, it was not out of animosity. For the first time in her life, she was surrounded by fellow teammates who were close to her in age, easily sharing interests and laughter. They were never intimidated by Castellanos’ impressive resume, and welcomed her instead.

This blooming camaraderie fed into a strong bond within the team. Instead of moments on the field, Castellanos cherished seemingly mundane memories with her teammates, such as the time she and the others discovered fellow senior Corey Segal asleep on the bus.

“I feel more comfortable and have more confidence playing with them,” Castellanos said. “We are really a team, and I like that.”

The girls soccer team still struggled to match up to the success of the 2017 season, ending with 0-8 in the Rio Hondo League record. The teamwork on the field faltered under pressure and could not form a cohesive force. Nevertheless, Castellanos left her mark, scoring eight goals throughout the season and displaying her experience through a wide array of technical skills and powerful kicks. She will take these skills to Penn State in the fall, majoring in physical therapy.

“I want to play at [Penn State] and then I want to continue playing professionally either here in the United States or Europe,” Castellanos said. “Soccer means everything to me and it’s my only passion. It’s what makes me forget about everything else, like my problems, and I think it’s all I have except for my friends and family.”