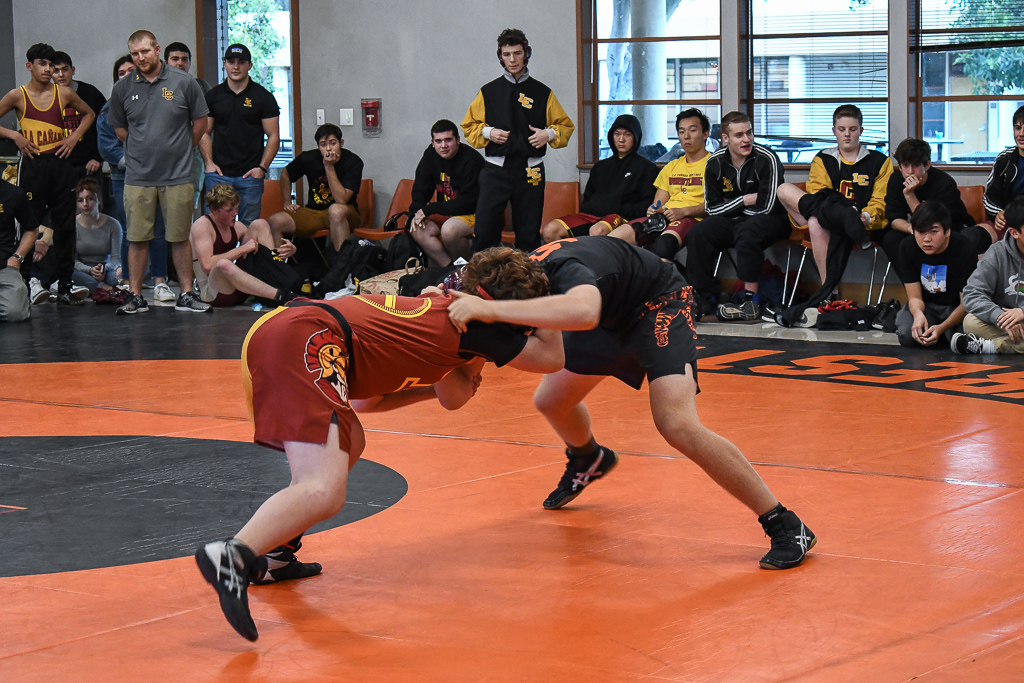 The Tigers' season finale will take place on Wednesday, Jan. 29, at Hoover High.

The varsity wrestling team lost its third league duel to La Cañada at home on Thursday, Jan. 23, finishing with a total score of 69-12. The Tigers began the duel with a major point deficit, having to forfeit many of the matches due to an insufficient amount of wrestlers.

Junior Roxanne Lynch (132 lb) represented the girls against the Spartans. Lynch reversed her position from the bottom by coming up on top, but her opponent took her down shortly after. The match continued to a second and third period where Lynch was unable to gain the upper hand against La Cañada.

Junior Owen Santos (120 lb) was the first male athlete in the lineup, quickly demolishing his opponent with a takedown followed by a pin. Senior Alex Garza (145 lb) lost his match, but was able to earn points for taking down his opponent.

Junior Andrew Kim (152 lb) and freshman Raymond Kwak (170 lb) then lost their matches with pins. Junior Devin Peries (160 lb) took down his opponent thrice, but La Cañada would thwart him with multiple escapes. By the last period, Peries would successfully takedown and win his match with a pin.

Final contender freshman Isaiah Cooper (195 lb) lost his match as well. After being taken down by his opponent, Cooper made a comeback by escaping La Cañada’s hold, but ultimately ended with a loss after he could not get out of a pin.

“Although the score shows otherwise, the majority of our wrestlers did well. The only reason why their team had a better score was because we did not have as big of a team as La Cañada did,” senior captain Chris Kim said. “But overall, I am content with the way we performed today. I would most certainly go over technique more and practice harder to prepare for the next duel.”

The Tigers will compete in their last duel on Wednesday, Jan. 29, at Herbert Hoover High School in Glendale.