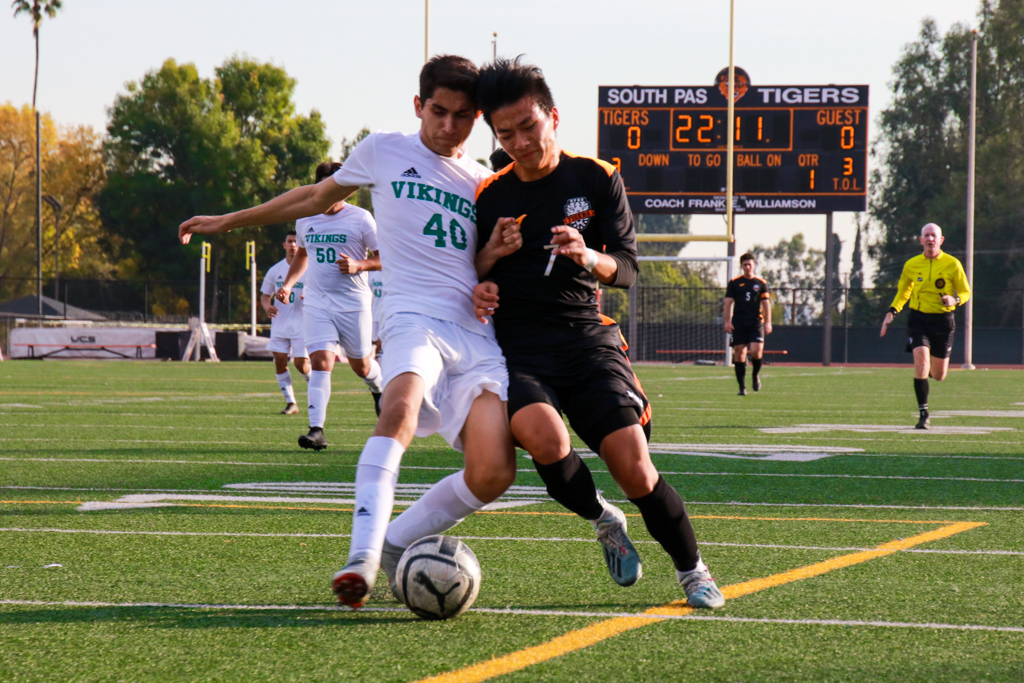 Boys soccer conquered the Blair Vikings, 2-0, on Friday, Jan. 24. After their sixth league game, the Tigers’ record stands at 3-2-1 in the Rio Hondo League and 6-6-2 overall.

The first half consisted of aggressive attacks and a great deal of failed attempts to score on both sides. After halftime, South Pas was able to push through Blair’s defense, finally capitalizing on scoring chances for two goals.

The game started very sloppy for South Pas, with incomplete passes and miscommunication. But luckily, Blair’s back line remained weak most of the game, allowing for constant action in the final third.

The Tigers were able to link together passes, but Blair’s disciplined goalkeeper maintained a clean sheet by halftime.

The Vikings disorganized back line gifted the Tigers two penalties. However, South Pas whiffed on both of the spot kicks and entered halftime at a 0-0 tie.

In the start of the second half, the Tigers continued to fire a barrage of shots at the Viking goal, but to no avail.

In the last 15 minutes of the game, Lee finally jumped onto the scoreboard. He took his chance and scored from a close kick off an assist from sophomore Arden Benitez.

With the clock nearing 80 minutes, the Tigers took shot after shot, hoping to further their lead. Ultimately, junior Porter Calva was able to dash right through Blairs defense and fire past the goalie to earn another goal.

“Today we played our hearts out. Every time we shot the ball, it never went in. It felt hopeless,” junior Jake Carless said. “We were able to build momentum and leave with a 2-0 win.”

The Tigers will challenge the La Cañada Spartans on Wednesday, Jan. 29 on the road.