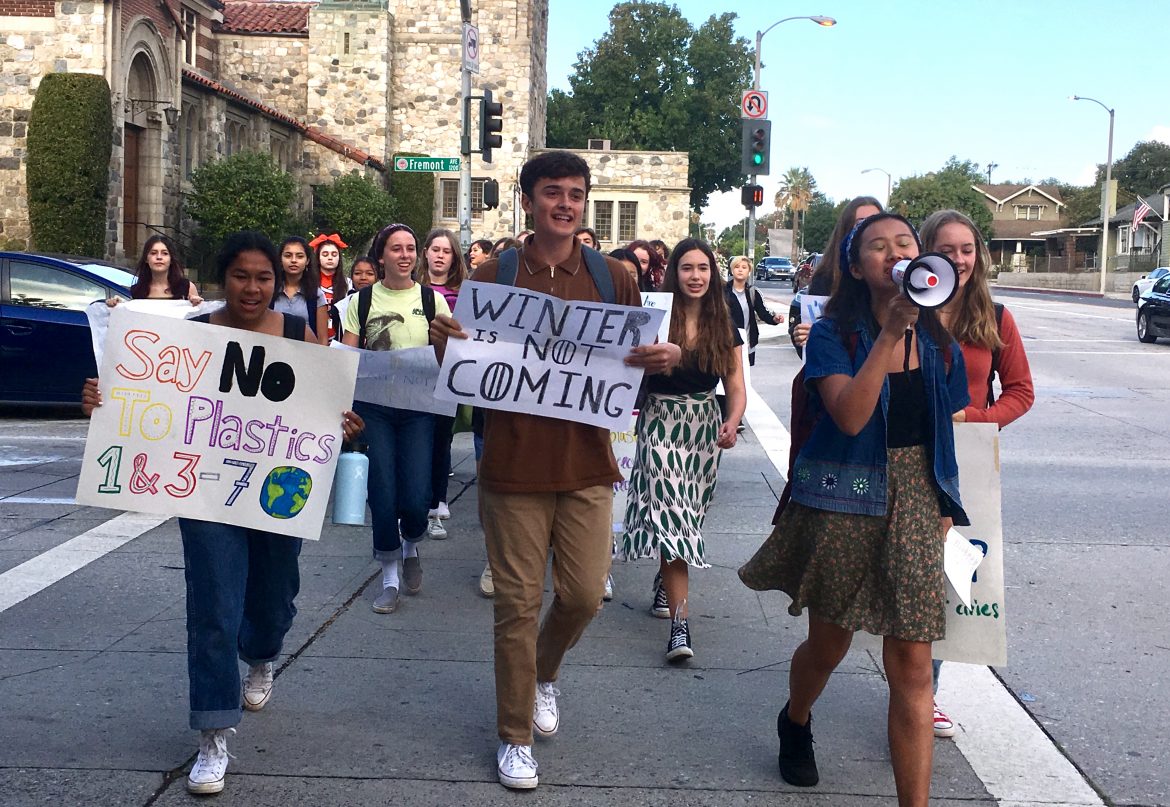 Students marched from Fremont Avenue to Fair Oaks Avenue with signs and loudspeakers in hand.

SPHS students marched along South Pasadena’s streets and at the Los Angeles city hall on Friday, Sept. 20, in a protest against government inaction towards climate change. Students rallied alongside youth leaders across 156 countries in the global climate strike.

The local protest began at SPHS’ Fremont Avenue entrance and lapped around Fair Oaks Avenue. Demonstrators chanted “Climate change is not a lie” while holding signs that read “Create a solution, not more pollution” and “keep organic waste in South Pas.”

SPHS club SP Saves Mama organized the youth strike to advocate against single-use plastics and its contributions to greenhouse gas emissions during production and disposal. Although California state legislation banned single-use plastic straws in sit-down restaurants in 2018, fast food restaurants are exempt from the policy.

SP Saves Mama member and junior Nicole Lu hopes that banning single-use plastics will not only stop climate change, but create a future of civic involvement and environmental sustainability.

“Plastic takes hundreds and hundreds of years to decompose and with the frequency of how often we use them, we need to have alternatives to plastic,” Lu said. “It’s our future. We’re the ones that are going to be living years from now, so it’s so important that we take action and are involved with the government.”

A group of SPHS students also participated in the downtown Los Angeles strike, marching from Pershing Square to LA City Hall. The young crowd waved posters and yelled out various chants, including insults directed at President Trump. The strike in Los Angeles was one of many that took place across the globe to push the United Nations to action during the Climate Action Summit, which aims to kick-start global campaigns against climate change.

In March 2019, SPHS students also joined a global climate strike at the Los Angeles city hall, endorsing the adoption of the Green New Deal. The plan calls for an upgrade in new clean energy infrastructure, and limiting fossil fuel use, in an effort to reduce the effects of greenhouse gases.

South Pasadena resident Cheryl Auger marched alongside Lu and other students in the local youth climate strike, supporting the need for more proposals like the Green New Deal and government action towards climate change.

“We have a President who is reversing every single policy on clean water, clean air, and every single thing that hurts our ability to be healthy and alive,” Auger said. “I do believe that if we all act now, we have an opportunity to make a change. By us showing up for climate change strikes, it will impress upon those people who make our policies and laws to change for the better for all of us.”

The United Nations will meet at the Climate Action Summit on Monday, Sept. 23.