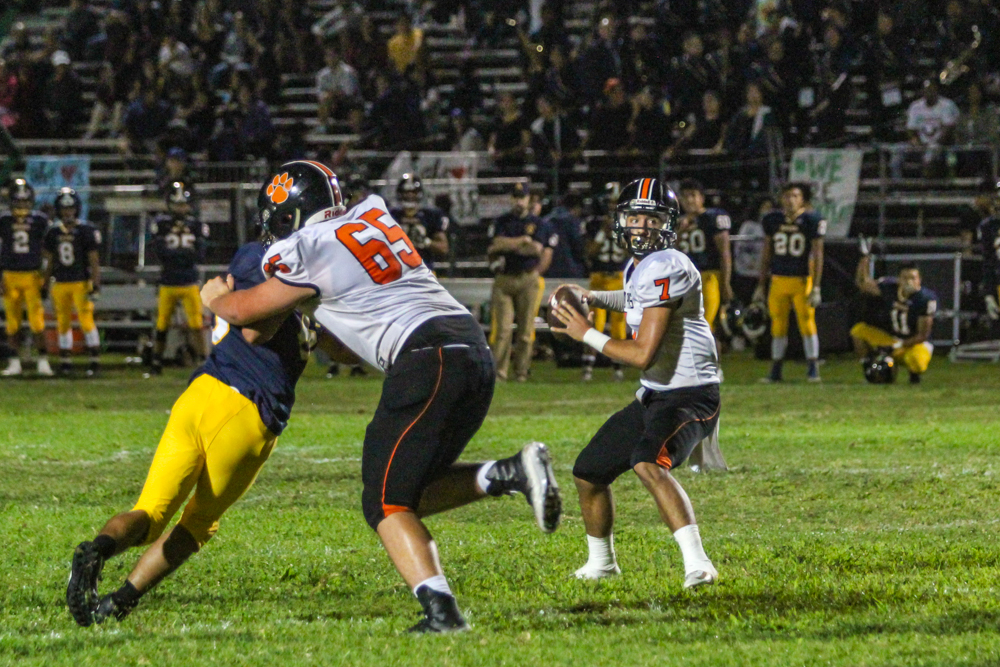 Falling behind in the second half, the Tigers didn't have enough in the tank to overcome a 21-point deficit.

The varsity football team suffered its first preseason loss against the Alhambra Moors on Friday, Sept. 20, losing 35-21. The Tigers kept the game close during the first quarter, trailing 14-7, but were unable to score for the rest of the first half. This loss will set their record to 3-1, with two games before league play.

The Moors started off strong, getting the Tiger offense off the field and scoring a rushing touchdown on a 65-yard drive. However, South Pas quickly recovered; senior Samuel Luna-Long connected with fellow senior Ivan Estrada for a 73-yard touchdown and senior Quentin Pithey tied the game, 7-7, with a successful point after. Unfortunately, this did not faze Alhambra. They marched into the red zone and scored again, ending the quarter with a 14-7 lead.

In the second quarter, both teams maintained sturdy defenses, forcing punt after punt. The Moors found a rhythm with two minutes remaining, mixing up inside runs and a short passing game. Alhambra sped past South Pas for a touchdown to increase its lead to 21-7.

Alhambra received the ball to begin the second half, but junior Terrence Sweetman kept a keen eye on the ball and intercepted a deep throw downfield. However, the Tigers were unable to capitalize on the turnover and Luna-Long threw a pick. The Moors took advantage of the short field and ran into the end zone for another six points. South Pas lost their momentum, as they struggled to get past the opponents’ defense and turned the ball over after a failed fourth down conversion. The Tigers ended the quarter on a positive note, stopping the Moors just outside of the red zone and forcing a missed field goal. Still, Alhambra had a commanding 28-7 lead heading into the final period.

The Tigers opened the fourth quarter with a steady 75-yard touchdown drive. Facing a tough Alhambra pass rush, Luna-Long calmly maneuvered around the pocket and extended the play to find open receivers. Down at the Moors’ five-yard line, an Alhambra defender bobbled a Luna-Long pass into Estrada’s hands, who found himself in the end zone for six points. With five minutes left in the game, a tired Tiger defense allowed another Moor rushing touchdown. In a 35-14 deficit, South Pas drove down the field one last time for a consolation score. Luna-Long threw his third touchdown of the night to junior slot receiver Jonathan Stride, ending the game with a score of 35-21.

“The refs were on the side of Alhambra and were calling penalties that weren’t there, but that didn’t stop us from scoring,” junior Jonathan Choi said. “Although they mentally and physically overpowered us, we didn’t give up, put up a good match, and played our best for all four quarters. We were still able to put points on the board. We can’t win against all the schools, but we can learn from our mistakes and continue striving for greatness.”

The Tigers are determined to get back on track at home next Friday, Sept. 20, against the Bassett Olympians.