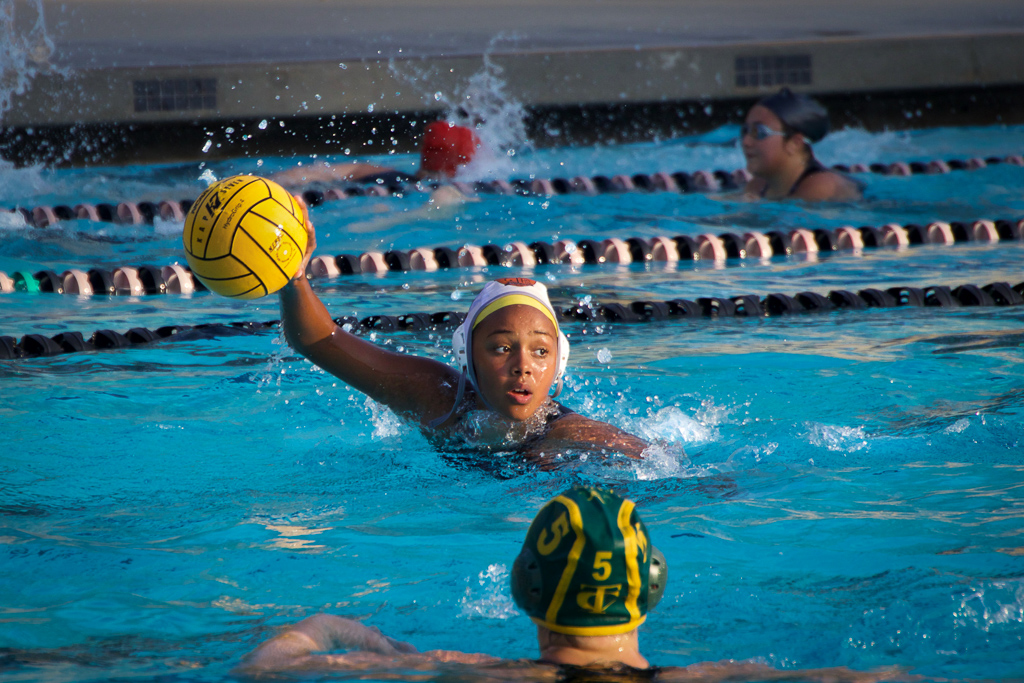 Junior Amanda Kanaly scored one of the three Tiger goals and had a half-pool shot taken away.

Girls varsity water polo faltered against the Notre Dame Knights, 21-3, in its first preseason game Tuesday, Nov. 19. The Tigers lacked consistency, which prevented them from stringing together proper passes.

The first quarter began with promising results. Three minutes in, freshman Grace Markus broke through the barrier of defense and quickly fired into the top right of the goal. Freshman Alison Lee continued the momentum, after receiving a Markus pass and scored.

The Knights were unfazed and calmly pushed back. They accumulated five shots in the span of four minutes, closing out the first quarter with a 5-2 lead.

Notre Dame continued to consistently score in the second period. The Knights narrowly won the sprint, forcing the Tigers to scramble and get situated on defense. Notre Dame proceeded to pick apart South Pas, rattling off another 5-0 run.

From there, South Pas was unable to regain the rhythm they had found in the first quarter. The Knights smothered the Tigers, stealing and deflecting many of the South Pas tosses. The first half ended 12-2 with the Knights in the lead.

Junior Amanda Kanaly was determined to score in the third quarter. Upon receiving the ball, she inched closer to the goal and quickly shot the ball in the goal’s lower left.

Later, with five seconds left in the period, Kanaly scored an incredible shot that did not count. She found the back of the net from halfway down the pool just after the horn sounded and the Tigers ended the third quarter trailing 16-3.

While the rival team had 17 varsity players, South Pas only had nine. As the team had been playing constantly, the Tigers’ energy seemed to deflate in the fourth quarter.

The quarter began with the Knights’ consistent passing and pressing. The Tigers struggled to keep up and found themselves plagued with an unorganized defense. Notre Dame continued to find easy opportunities to score, and South Pas trudged to the end of the fourth, eventually falling, 21-3.

“We got off to a pretty good start. Despite having a new team, we still had great chemistry, enabling us to execute the game. ,” Kanaly said. “Although our shots didn’t go in, we attempted multiple shots which was impressive. We’ll definitely continue to focus on basic fundamental to improve our play.”

The Tigers will seek revenge against the Knights on Tuesday, Dec. 3 at home.