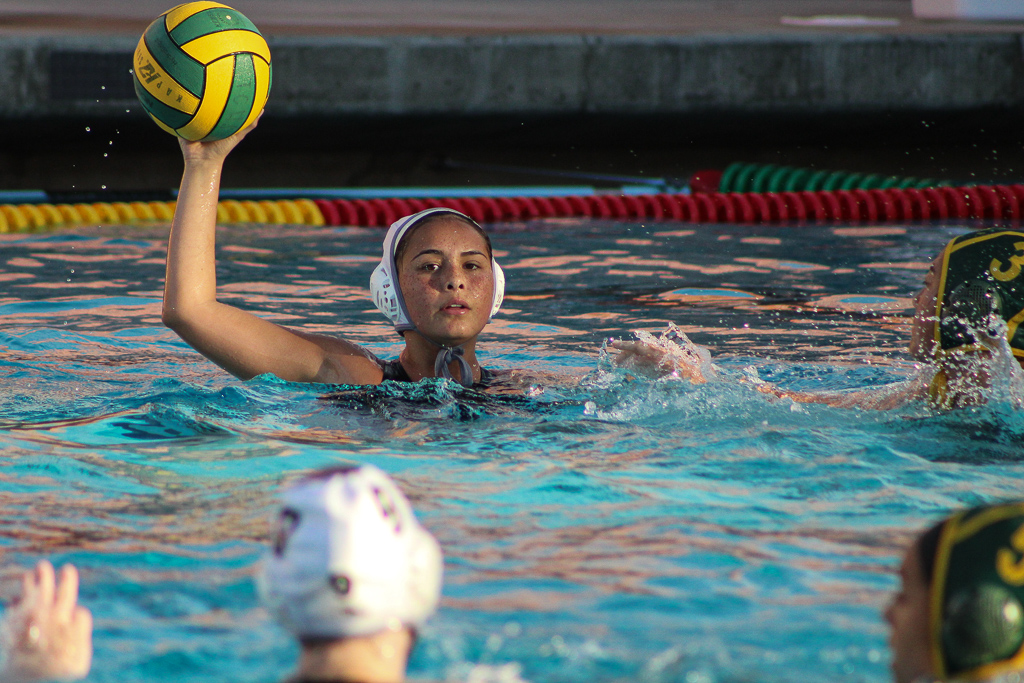 Senior Kili Dickinson surprised the opposition, scoring the first goal of the game.

Girls water polo fell against Temple City, 8-6, in the league opener on Tuesday, Jan. 7. Compared to previous games, the team showed stronger chemistry with consistent communication and strategic calls. Yet, with the ball in hand, the players hesitated and shot with poor accuracy. By the end of the game, the Tigers were unable to surpass the Rams and lost 8-6.

From the start, the team struggled to keep the ball in their grasp. Freshman Grace Markus attempted to snatch the ball back with multiple steals; however, her efforts weren’t enough. In every toss and turn, the Tigers were constantly pressed back from the Rams’ intense pressing and blocking.

However, senior Kili Dickinson escaped from their defensive barrier and scored the first goal of the game into the bottom right corner of the cage. Temple City quickly retaliated and managed to score twice towards the end of the quarter to establish a 2-1 lead.

In the second quarter, South Pas continuously found itself losing possession of the ball from the opposition’s aggressive play. Four minutes in the period, Temple City had already scored six consecutive points.

Still, the Tigers continued to fight and prevented the Rams from opening a large lead. Markus and junior Piper Fleming scored, which narrowed Temple City’s lead to 6-3.

In the second half, coach Mike Gonzales substituted junior goalie Gloria Gray in the keeper position, turning the tide of the game. From high tosses to hard shots, Gray focused her attention on the ball and blocked countless shots. She didn’t stop here. Gray swam out of her range to steal the ball, which abruptly halted the Temple City’s scoring momentum at 8-3.

The girls presented a burst of energy in the final quarter, leading a late comeback attempt. In the span of thirty seconds, Markus, junior Piper Fleming, and sophomore Lauren Calderon showed sensational teamwork and added three goals to the scoreboard.

As freshman Allison Lee’s shot glanced off the edge of the cage, Markus seized the ball and passed it to Fleming, who strategically hurled the ball to the corner of the cage. Markus managed to steal the ball again and passed the ball in front of Calderon. Calderon, who had snuck behind the Ram defense, easily put another shot in the net.

Even with the ball in Temple City’s possession, the trio remained were unfazed. Blocking a pass, Calderon passed the ball to Fleming who waited until Markus was in the right position. Markus received and launched it in no time, bumping the score to 8-6.

Despite the strong offensive run, South Pas ran out of time and Temple City walked away with an 8-6 victory.

“We felt more confident going into this game since we’ve had a considerable amount of time to prepare during these past couple weeks,” junior Amanda Kanaly said. “This game has showed us that we are definitely capable of being a tough competitor among our league teams.”

The team will continue its league play with its upcoming home match against La Cañada on Thursday, Jan. 9.