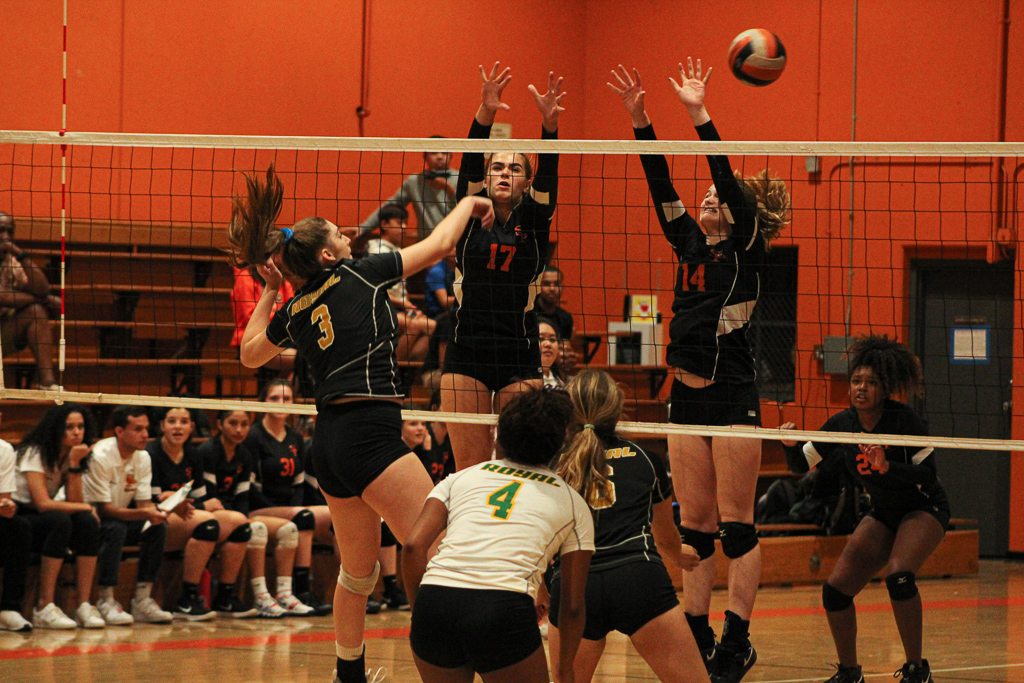 For the first time in school history, the girls varsity volleyball team advanced to the CIF quarterfinals.

Girls volleyball crushed Royal HS at home in the second round of CIF on Saturday, Oct. 26. The large turnout of enthusiastic fans echoed the Tigers’ stellar performance as they defeated the Highlanders in four sets.

Junior Lola Foord started the team’s success with several well-timed kills on the right side and strong communication on the court helped the Tigers maintain the lead the entire first set. In addition, spectacular sets and serves from fellow junior Katharine Florence pushed South Pas ahead by double digits.

Despite a late four point run by the Highlanders, sophomore Abby Garner had two vicious kills to close out the first set 25-16.

Although the third set started off well for South Pas under Foord’s masterful play, successive Highlander blocks and kills deflated the Tigers’ morale and communication. The score remained tight in a grueling back and forth match, but Royal gained the upper hand and mounted a five point score run.

South Pas tried to halt Royal’s momentum with a timeout, but it did little to quell the Highlander’s efforts to force a fourth set. Even with a late four point comeback, the Tigers lost the third set, 25-19.

In the fourth set, sophomore outside hitter Alyssa Sokolow dominated. Her consecutive aces fueled the team’s early five point run in the fourth set. However, multiple South Pas hitting and passing errors allowed the Highlanders to creep back into the game at 15-15.

Sokolow responded, transforming into a hitting machine as she relentlessly racked up kills, bringing the Tigers closer to victory. While Sokolow earned the bulk of the Tigers’ fourth set points, Hirano held down the fort, scrambling around the court to keep the ball alive.

Finally, the Tigers reached match point, 24-20, but began to lose their hold on the game. The Highlanders scored twice, moving the score to 24-22.

Both sides cautiously tried to keep the ball in play, but Royal eventually crumbled, spiking the ball out of bounds; the Tigers escaped, 25-22.

South Pas reached the CIF quarterfinals for the first time in school history, but the Tigers are hungry for more.

“All of our energy and our enthusiasm really helped us throughout this game. Our overall play was really great.” Sokolow said. “We’re going to look back on today, making school history, and just [keep] fighting for what we want.”

The team will head into the CIF Southern Section D-IV quarterfinals on Wednesday, Oct. 30, away at La Serna at 6:00 p.m.