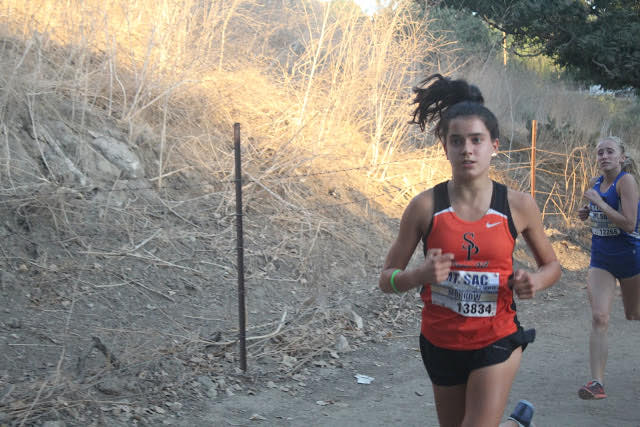 With a 18:14.6 time, sophomore Sydney Morrow earned a bronze finish out of 103 runners.

Cross country team dominated at the Mount SAC Invitational, one of the largest high school meets in the nation with over 14,000 runners, on Friday, Oct. 25.

The boys and girls teams both competed in the highly competitive D-III, IV, and V Individual Sweepstakes races. Despite Mount SAC’s massive inclines, slippery powder dirt trails, and with weather exceeding a sweltering 90 degrees, the boys team placed first and the girls finished fourth in a highly competitive field composed of the strongest runners across the three divisions.

“Once I found out that [the boys team] won, I was shocked, especially with [junior] Benny Perez hurting his hamstring in the last mile and [junior] Patrick Latting not having the best race, so I think that this is a really good sign that we are prepared to go deep into CIF,” Parkinson said.

Many team members contribute their performances to coach Michael Parkinson’s regular afternoon workouts at hilly locations such as Debs Park, Via del Rey, Camino Verde, and Bank Street. This training regime has yielded its benefits, with the boys team ranking fifth in California D-IV rankings and the girls team sitting at seventh.

The team will compete next in the Apache Invitational on Friday, Nov. 1.

Football game against Temple City postponed due to pipe burst