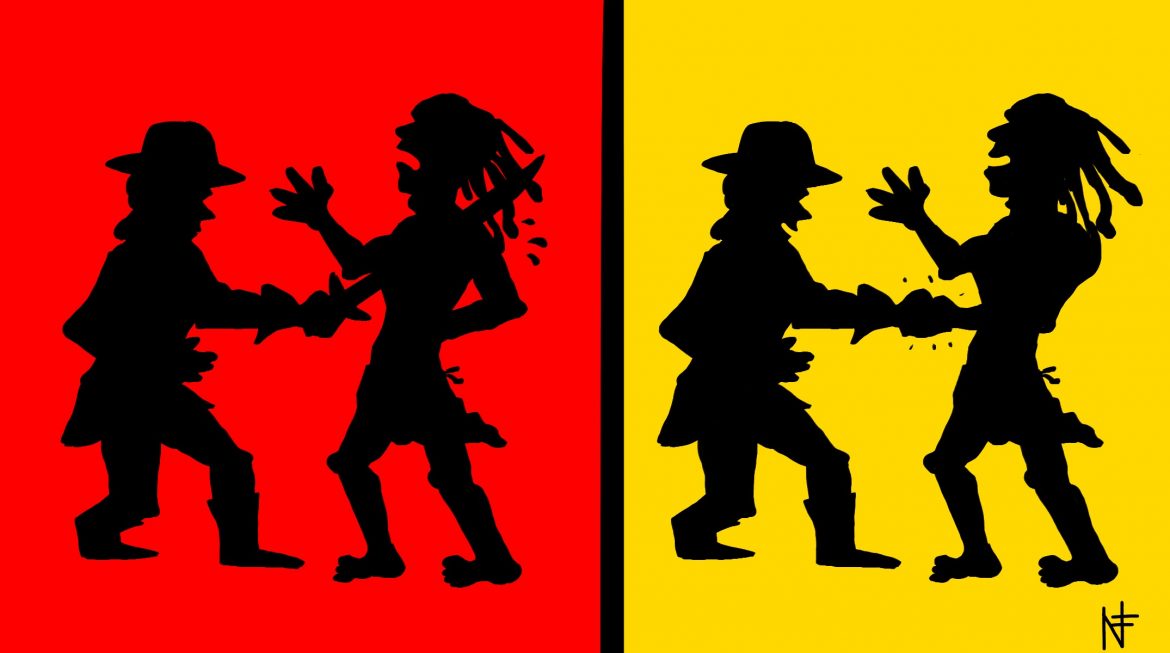 The observance Columbus Day perpetuates negative stereotypes and a Eurocentric view that attempts to mask the atrocities of the past.

Elementary schools have canonized the mnemonic “In 1492, Columbus sailed the ocean blue,” when discussing early American history. Most students come to adopt this psyche, a curricular choice that solely acknowledges Columbus’ discovery of the Americas and not of the United States’ problematic background of colonization.

America has a blatantly Eurocentric focus when dealing with its own history. This offense censors many events since the country’s inception, and inaccurately portrays the history of indigenous people.

The historical content currently taught in schools continues to promote this misrepresentation through a biased mindset. This cannot continue; to stop another generation from growing up with the tactless implications of Columbus Day — the physical manifestation of America’s longstanding denial of genocide — American schools must explore history without erasing hard truths.

Grossly incorrect stereotypes are created when these injustices are fail to be addressed. This belief that America was “discovered” by Columbus ignores all the preexisting cultures of the Native Americans, who initially inhabited the “New World.”

Schools, in a misguided effort to include indigenous history, only source content with books like Island of the Blue Dolphins and stereotypical projects like basket-weaving. The primary focus is on the Missions, and while a crucial part of state history, their involvement in subjugating the Native Americans to Christianity — forcing them to convert to a European lifestyle by erasing their culture — is never clearly expressed.

This whitewashed version of events will never truly promote inclusivity of indigenous culture. Overshadowed by the California Missions, an education like this only promotes a deceitful message to impressionable students: that there was nothing wrong with the European treatment toward indigenous people in American history. It is easy to see past this cover-up and recognize the nonsensical logic, but also impossible to escape all the subtle European influences in common sources.

In the meantime, America hypocritically tolerates senseless rhetoric that justifies European expansion. Human rights may have gained prevalence globally, but this proactivity does not seem to exist for indigenous people. When it comes to those who do advocate justice for Native Americans, a common response they receive is that “people cannot lay claim to land. Therefore this is no genocide, but a consequence of warfare during conquest where a much stronger civilization conquered a much weaker one.”

This is nothing but a heartless, inhumane way of viewing history, and the inability of detractors to feel empathy conveys a lack of understanding to what ‘genocide’ means. People who dismiss the idea of a Native American genocide are guilty of abusing their privilege. Unsurprisingly, these very people downplay the gravity of various situations indigenous people face today.

Nobody is exempted from recognizing the false idealization America is built upon; thus, there must be a movement to reform Columbus Day. In Los Angeles County, efforts have been made to transform the holiday into Indigenous People’s Day.

This is a step in the right direction, but it is not enough. This country must do so much more, to correct the inaccuracies of indigenous history in social studies courses and fix the euphemisation and erasure of details for minority contributions and discrimination. Time is of the essence, and unless there is a proactive approach to rectify these wrongs, humanity will never truly atone for its dark realities of colonization and imperialism.

Politics should have a place in the...

Dark Humor and the Trivialization of Mental...

This polarization and hate speech does no good for anyone, especially about Columbus Day and Thanksgiving. We need to celebrate what we have in common…particularly on the upcoming festival of Thanksgiving which is focused on thanking God for the blessings we all share.

Oh- you mean like ‘Thanksgiving Day’? Because the Indians are really grateful every year that the Plymouth colonists arrived to found the United States and take away their food and land, right?

So observance of ‘Thanksgiving Day’ (which is even more of a distortion of U.S. history) IS A FEW DAYS AWAY- what are you going to do about it? Protest the day? Write articles like this one to denounce the day in public and have it changed as well?

Because if you don’t do that then YOU ALL are the hypocrites, writing empty articles for self-serving purposes rather than helping the Indigenous in this country. So, let us know your intentions little Tigers- the world is awaiting to read of your next efforts in this cause…