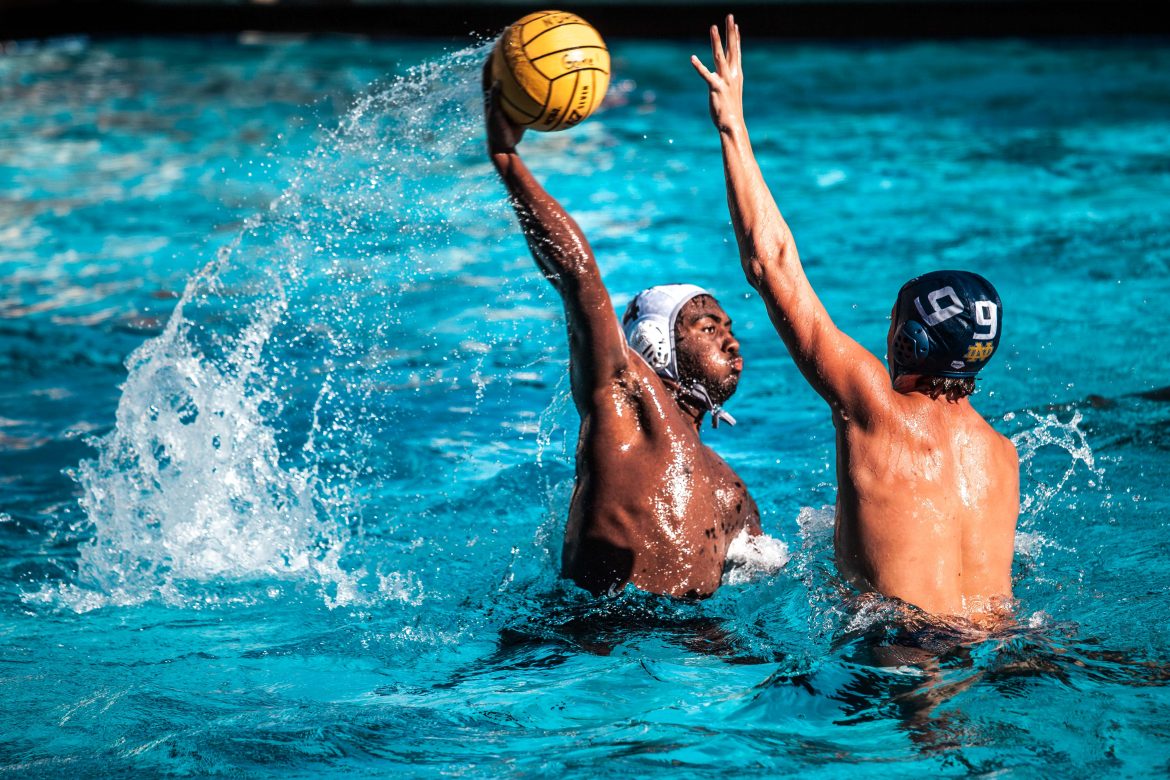 Sophomore Anthony Felix rises above the water to take a shot.

Boys’ water polo scarcely defeated Notre Dame in overtime with a final tally of 10-9 on September 13. Both teams showcased similarly effective offensive and defensive tactics, nevertheless, the Tigers pulled through late in the game and overcame the early lead of Notre Dame.

Notre Dame started off strong with a foul by South Pas in the beginning minutes of the quarter; however, sophomore Liam Markus valiantly blocked the opposing team’s free throw shot. The quarter continued with a score by Notre Dame, although in retaliation, senior Philip Lee secured the ball into the net with a well-aimed shot. Even though freshman Owen Imasaki added another point to the scoreboard for South Pas, Notre Dame’s well-executed passes and offensive pushes outplayed the Tigers, ending the first quarter with a score of 4-2 in favor of Notre Dame.

Sophomore Anthony Felix kicked off the second quarter with a shot that darted past the opposing goalie. After several offensive attacks against the South Pas defense by Notre Dame, freshman Egan Hadsell-Florin landed a corner shot from the edge of the pool. A long toss from across the pool set up junior Evan Kowal to stick a skip shot close up to Notre Dame’s goal. The two opponents kept each other on their toes with skilled blocks by goalies and interceptions by their defensive line, finishing the second quarter with a tie at 5.

In the third quarter, Notre Dame’s early possession initiated an offensive push that retook the lead. However, Markus wouldn’t let their streak of scores carry on, saving the Tigers four times within minutes. Successfully defending numerous pushes from Notre Dame, Kowal counterattacked, lobbing the ball right over their goalie’s reach. The third quarter ended, counting 7-6 with a minor advantage to Notre Dame.

A commencing goal by Notre Dame set South Pas into action, with Lee rallying his teammates and swiftly stealing the ball during the opposing team’s offensive push. The Tigers improved their offensive teamwork as well, setting up opportunities from all angles, leading to Kowal landing the ball into the net. An aggressive skip shot by sophomore Eddie Lane-Flannigan and had South Pas fans in cheers, tying the score at 8-8.

Not long after, the match went into overtime and the pressure was on for both teams. Lane Flannigan’s next powerful shot caught Notre Dame’s goalie off guard, knocking the ball into the goal. Two close shots were saved by Markus, delaying Notre Dame and allowing Lee to score a skip shot on their next offensive push. The fifth quarter in overtime tallied at 10-8 in favor of South Pas.

The Tigers’ sensational defense stopped Notre Dame in their tracks during the beginning of the second half of overtime, although eventually, Notre Dame outsmarted South Pas with a setup toss and overhand smash. Fortunately for the Tigers, they easily delayed Notre Dame, keeping the ball in possession until the whistle blew. South Pas triumphed with a final result of 10-9.

Boys’ water polo hopes to vanquish the competition in their upcoming AFC tournament September 21-22 at Coronado.