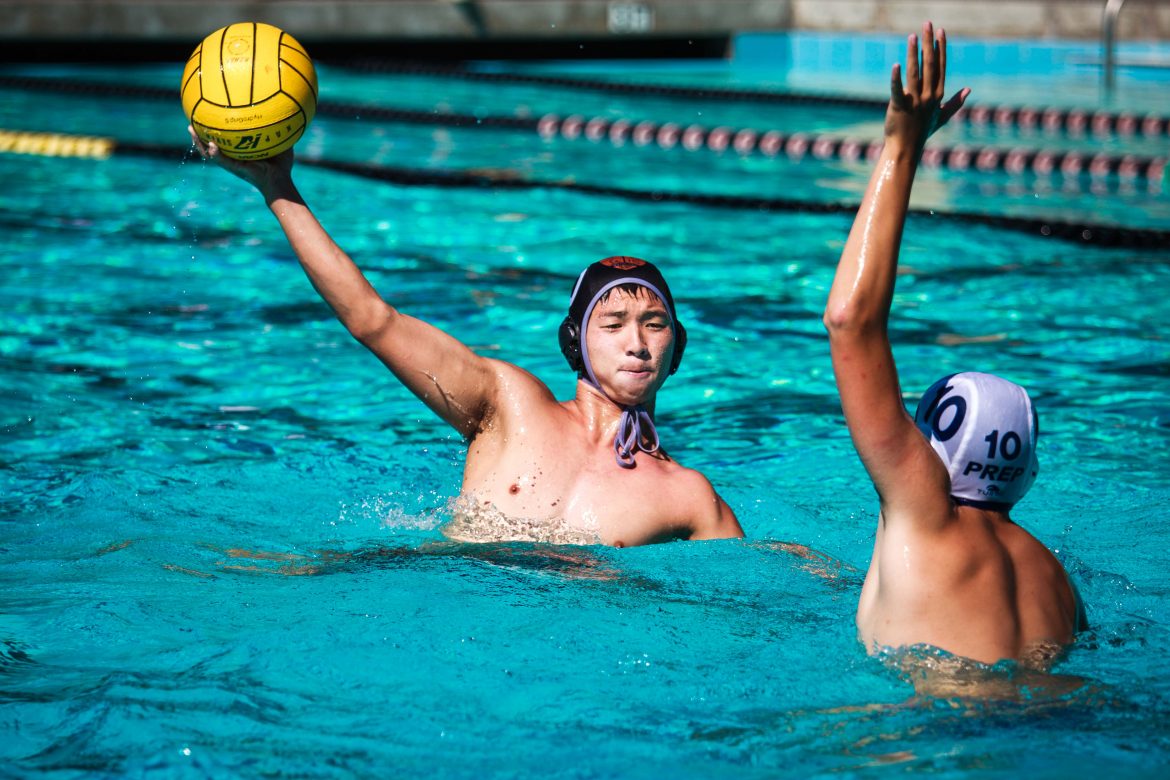 Senior Phillip Lee looks for an opening in the opposing defense.

Boys’ water polo opened their season with a decisive win against Flintridge Prep on Wednesday, August 22. The Tiger’s well-executed offense and young talent pulled through in the impressive 9-4 victory. Though South Pasadena was defeated by Flintridge Prep at the beginning of the season in 2017, the team secured a satisfying win in their latest game.

Even with Flintridge Prep pulling an early goal in the first quarter, it was unable to setback South Pas’s sophomore goalie Liam Markus admirable lob, leading to a scoring shot. After a turnover by Flintridge, senior Philip Lee launched a well-aimed stroke, flying past Flintridge’s goalie and into the upper right corner of the net. Cheer-worthy interceptions and scores from sophomore Eddie Lane-Flannigan gave South Pas the edge in the first quarter with a 4-1 lead.

Flintridge scored two quick goals in the beginning of the second quarter, catching the Tigers off guard.  However, the South Pas team gained back their footing as sophomore Anthony Felix played an imposing turn-over, leaving the attending audience in applause. After trades of the ball, junior Evan Kowal charged at the goal up close to the net and secured a goal. The aggressive play of South Pas’s offense ensured another striking goal, giving the Tigers a 6-3 lead at the half.

Learning from their early mistakes on defense in the beginning of the second quarter, South Pas’s defensive line was now left impenetrable to any Flintridge offensive. The defensive stalwart didn’t affect the offense, however, as they continued to aggressively attack the Rebel defense. Lane-Flannigan continued to intercept and score for South Pas, with the aid of coach Michael Gonzales’s words of advice in passing for the offense. Flintridge’s motivation flattened as no goals were added to the scoreboard, now showing a score of 8-3 at the end of the third quarter.

The rather slow pace of the fourth quarter gave South Pas’s team confidence in their lead with their continued solid defense. However, with the switch of positions in the Tiger’s offense, the ball tossed back and forth to each side of the pool as neither team could secure a goal, even after close attempts from freshmen Blix Hadsell-Florin and Egan Hadsell-Florin. The game concluded with a final score of 9-4 in favor of the Tigers.

After the game, the South Pas varsity team upperclassmen took pride in their younger players who they hope will bring a big push in their goal of a deep run in league.

“I just think we have a much bigger roster this year and we have a lot of new faces,” team captain Evan Kowal said. “It’s been nice to practice with such a diverse group of kids, who in terms of knowledge in the game and experience has been really good.”

Even with new players ready to bring their team closer on the journey to CIF, Philip Lee noted the importance of training and preparing to accomplish their goals, as well as bonding to promote teamwork.

“We also hope to add to the chemistry of our team through practices every day, from morning practices, afternoon practices, and in-game scenarios,” Senior Philip Lee chimed in. “Every day we get better and get to know each other a bit closer.”

After a rather successful 2017 season, time will tell if the team’s newer roster will push them farther into league and CIF. The Tiger’s next opportunity comes this Friday, August 24th against Montebello.