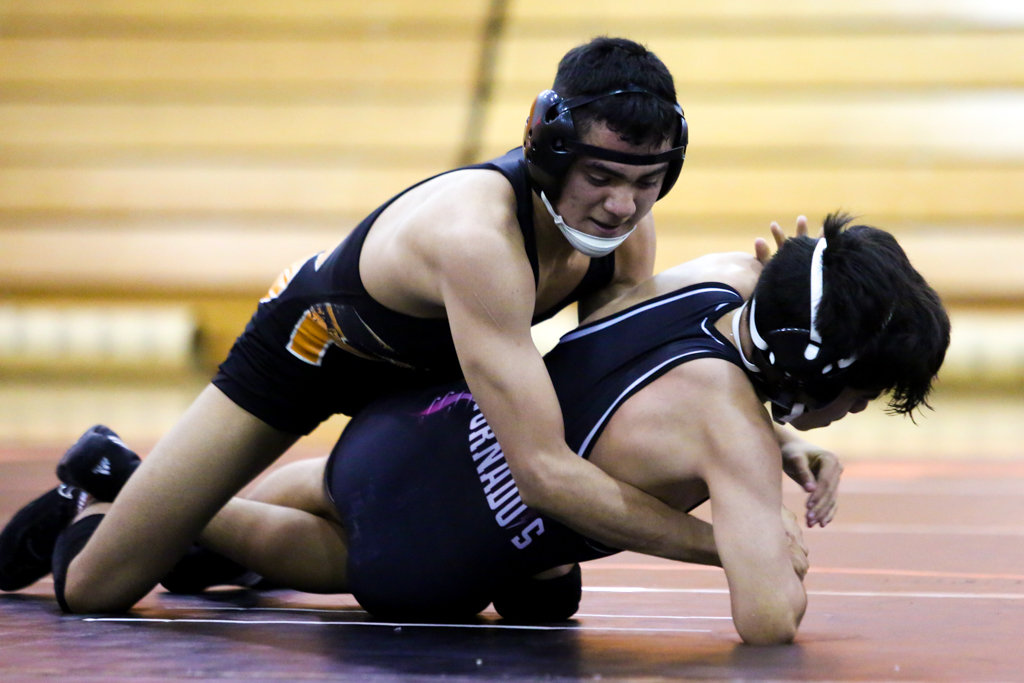 The wrestling team lost its first home match on Thursday, January 12 against the Hoover Tornadoes. The visiting team commanded the match with an impressive score of 54 to the Tigers’ mere 30.

Irvin Perez throws opponent to the ground for an easy pin.

Of the fourteen varsity matches that were held during the duel, South Pasadena won five. However, the Tigers had to forfeit five due to a lack of bodies in the 113, 160, 170, 182, and heavyweight classes. In addition, due to the rough nature of the sport, the Tigers had to pause three matches to tend to injuries, and of those three, two were forfeited.

Hoover wrestler is lifted off his feet by South Pas’ Irvin Perez in the first round.

South Pas started off strong with a win from sophomore Seung Ham (106 lb), but this brief excitement was short-lived when the 113 weight class was forfeited. This back and forth brought the score to an even 6-6 which riled up both junior Irvin Perez (120 lb) and freshman Chris Kim (126 lb), who both won their matches in the second and third periods, respectively. With these wins, the score quickly climbed to 18-6, giving the Tigers a clear advantage over the Tornadoes.

Landon gains the upper hand against his hoover opponent.

Yet Hoover was not affected by this obvious score difference and sent a very experienced wrestler to face junior Nate Martinez in the 132 lb match. The aggressive opposition managed to wrangle Martinez into a pin almost immediately. The points from this duel were made up when Hoover forfeited the 138 lb, bringing the score to 24-12.

The Tigers were double Hoover’s score until sophomore David Szilagyi (145 lb) faced his opponent. Szilagyi was tossed around and when he stopped to catch his breath, he was tackled out of the ring and lay injured, coughing on the ground. South Pas was forced to forfeit when Szilagyi had an EIB, or exercise induced bronchospasm. This gave Hoover the advantage and the score became 24-18.

Junior Sebastian Chinen (152 lb) quickly made up for this lapse and pinned his opponent with 1:30 left on the clock. The Tigers were clearly ahead until they had to forfeit a possible 18 points in the 160, 170, and 182 lb categories. With this development, the score was 36-30, Hoover.

Assuming South Pas won their next two matches, the duel would be theirs to take. This possibility was crushed as soon as seniors Brayan Quintana (195 lb) and Michael Blanco (220 lb) both lost to their opponents. Quintana was pulled out before the second period due to a prior season injury, and Blanco was pinned towards the end of his duel after multiple complications with a bloody nose.

All in all, the Tigers fought valiantly and came back with more aggression and spirit than seen at the La Cañada match, but the duel came down to weight class rather than skill. The Hoover match marked the Tiger’s second league competition and will be followed by their next league meet away at San Marino on Thursday, January 19.