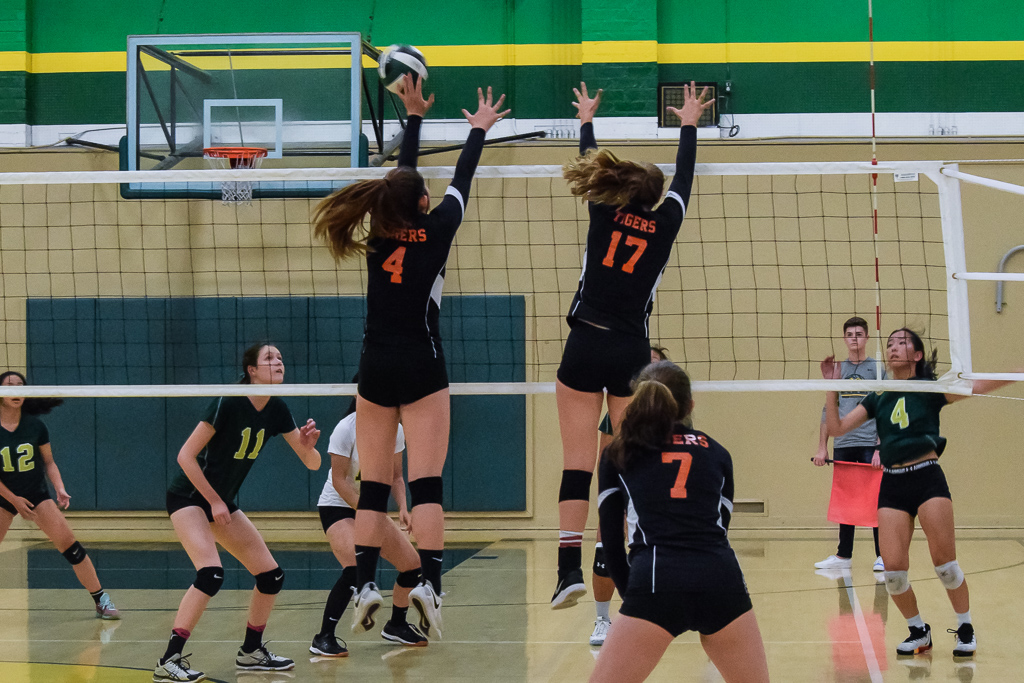 Sophomore Erin Hughes (4) led a late Tiger comeback in the first set, setting the tone for the rest of the match.

The girls volleyball dominated Temple City in three sets on Tuesday, Oct. 1. In the first matchup against the Rams this season, the Tigers’ violent spikes, powerful blocks, and good team chemistry resulted in an easy win, bumping their league record up to 5-0.

The Tigers had a rough start in the first set. Temple City attacked rapidly, accumulating kills and spikes and South Pas was unable to keep up. However, sophomore Erin Hughes led a defensive resurgence, putting up multiple strong blocks.

Offensively, freshman Sofia Reyes’ sets allowed South Pas to pull through and establish a consistent lead. After a corner ace by junior libero Lindsey Hirano, the Tigers won the set, 25-15.

In the second set, throughout the long rallies, the Rams struggled to return junior Lola Foord’s and sophomore Alyssa Sokolow’s powerful spikes. In the end, Temple City suffered a 25-13 defeat, as sophomore Kennedy Taylor finished the set with a thundering spike.

In the third and final set, Temple City nearly made a comeback, but South Pas ultimately defeated them. The Rams started off the set strong and took advantage of the Tigers’ lack of communication.

Sophomore Abby Garner’s blocks and spikes were crucial down the stretch, allowing South Pas to pull forward. After a couple of close rallies, Sokolow won the game for the Tigers with a spike, bringing the set score to 25-19.

“The team did a good job collaborating on offense and defense to get a three set win. We acclimated to the trick balls they sent back over to us quickly, after we were down by many points in the first set,” Taylor said.

The Tigers hope to extend their league winning streak to six when they travel to San Marino to play the rival Titans on Thursday, Oct. 3.