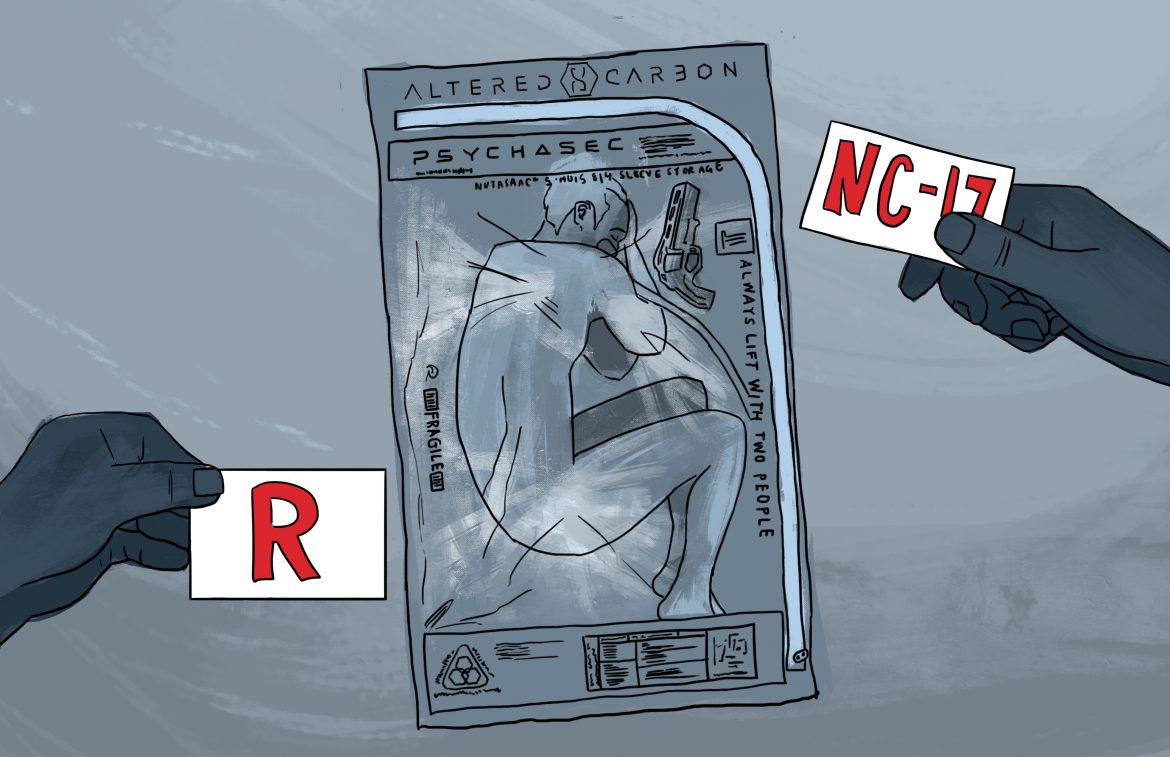 Violence and nudity in media has seen a great increase in recent years, but where do we draw the line on what is a justified use of violence? Ben Clark discusses our reaction to violence given different contexts.

The Netflix Original series Altered Carbon became a hit with audiences when it first came out on February 2nd. The show, while praised for its visuals has faced critical backlash in regards to its excessive portrayal of violence and nudity. Many people complain that this brutality is overblown and gratuitous, dismissing the show as being too reliant on shock value to build its story. However, Altered Carbon is not the only show in recent memory to try to prove a point with violence. Other popular shows such as HBO’s Game of Thrones and Westworld openly feature a great degree of R-rated content. This trend has been going on for far longer in slasher films such as 1974’s The Texas Chainsaw Massacre. As the number of hard R-rated films and tv shows are rapidly increasing, the question that must be asked is what level of violence is acceptable in our entertainment industry.

The recent increase in adult television shows is largely due to the rise in streaming services and newer networks. The early days of television were dominated by large networks such as CBS and NBC which traditionally had strict censorship rules both on what can be said and done on television. However, streaming services like Netflix and newer channels like HBO have given writers greater creative freedom over their material, condoning more unique stylistic choices and scaling back censorship policies greatly. This has helped to advance television as an art form and has propelled these services to the forefront of the entertainment industry, but has also led to more instances of violence and nudity in shows overall.

One thing that must be understood in order to answer the question of violence in media is the fact that the level of violence that audiences are willing to put up with is subject to change from film to film. After all, Stanley Kubrick’s A Clockwork Orange is considered an artistic achievement despite its gratuitous sexual violence while the Saw films are often panned for their overblown gore. The reason for this is that, though both movies are undeniably violent, A Clockwork Orange provides context for its violence as social commentary. While Saw flicks shower their audiences with blood spatter purely for the twisted purpose of entertainment, Stanley Kubrick uses his film’s intensity to contemplate on violence in society. In this sense, the context of a story’s violence is just as important as the amount of violence itself.

Though Altered Carbon often uses its fight scenes for entertainment purposes, there is a deeper meaning behind the show’s portrayal of violence that first meets the eye. The futuristic world in which the series takes place is one in which human beings can transfer consciousness between bodies; the wealthy being able to effectively live in luxury forever. As a result, many characters survive the brutal “deaths” that they encounter. With this in mind, it is clear that the violence of Altered Carbon exists to extend the theme that inhuman levels of power, from wealth and politics to immortality itself, prevents anything from being sacred. Thus, the violence of Altered Carbon, though it may be more abundant than other films and shows, is justified in its intent to make an audience feel uncomfortable about the situations that the show details.

It is undoubtedly true that violence in film and television has increased in recent years. With the rise of streaming services, more television shows and movies exhibit R-rated content than ever before. Though many of these brutal stories reflect a troubling trend towards gaining entertainment from violence, some writers have utilized their creative freedom to make interesting artistic points about society and the human condition.