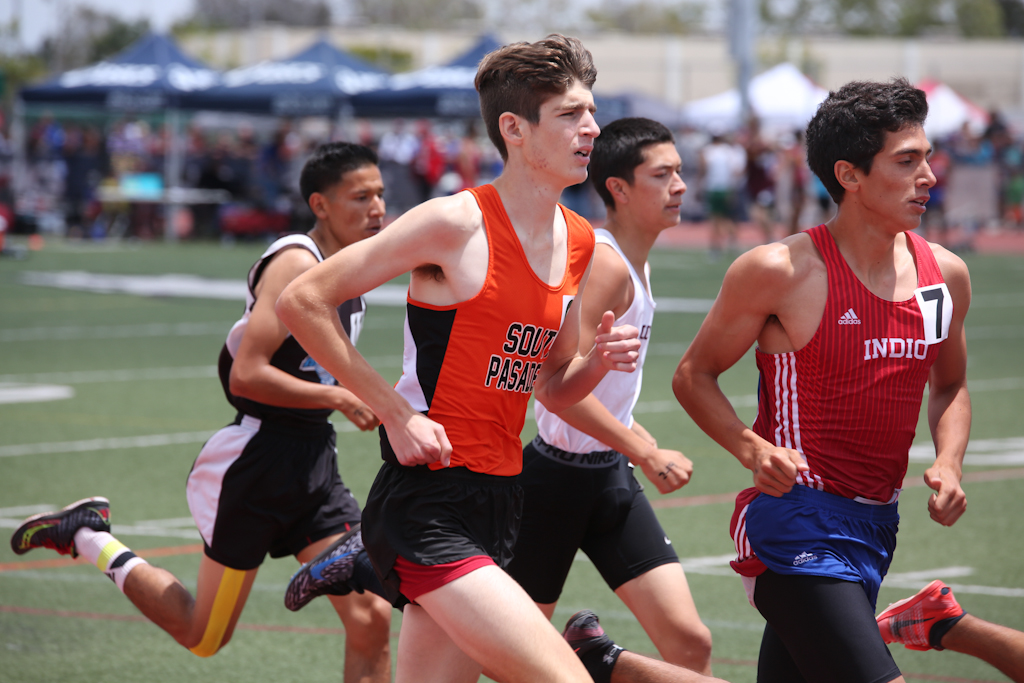 Some of the top high school track and field athletes in Southern California competed at the Division 3 CIF Preliminaries at Estancia High School on Saturday, May 14. The Tigers sent 17 members to prelims, producing three athletes who will advance to finals. Many of South Pas’ competitors were close to qualifying, but their times were not enough to secure a spot, as only the top nine move on in running events.

None of the distance racers qualified despite giving a strong effort. Senior Emily Ye and freshman Elizabeth Bock placed 25th and 26th overall out of 40 total girls running the mile with times of 5:31.11 and 5:33.42 respectively. Ye also garnered 26th out of 42 overall in the 800 meters. Junior Kieran Press-Reynolds finished 19th out of 42 in the mile and sophomore Oliver Chang ran a time of 9:50.87 to snag 23rd out of 43 in the 3200 meters.

Despite solid performances from the sprinters, only senior Alexis Mora moved on to finals in the 300 meter hurdles. Mora won first in her heat and sixth overall with a time of 46.81 seconds. There were 42 total hurdlers. Freshman Christina Taylor competed in four events, the 4×100 meter relay, the 400 meters, the 200 meters, and the 4×400 meter relay, and narrowly missed qualification in all of them. With a time of 59.36, she earned third in her heat and thirteenth overall in the 400 meters. Taylor was 18th out of 42 girls in the 200 meters. Taylor and Mora were joined by freshman Ashley Hugasian and sophomore Riley Segal for the 4×400, but the squad placed tenth overall and barely missed qualifying. However, they still have a small chance of competing at finals if another team scratches as the Tigers are the first alternates. Seniors Jonathan Jackson-Williams and Rebecca Liston both did not place high enough to move on in the 100 and 200 meter dashes.

Senior Esteban Suarez easily cleared 13 feet to gain advancement to CIF Finals in pole vault. In the high jump, junior Max Schoerner qualified as well, jumping 6’1”. Sophomores Molly Round and Cate Latting will not be moving forward in the high jump and pole vault.

“I’m so proud of how far so many of our athletes have come this season. Their hard work has definitely shown as we had over a handful of people qualify for CIF prelims. Despite injuries, everyone performed so well and I couldn’t be happier. We had so many young athletes, and although not everyone qualified for finals, it’s crazy to think that they are ranked so high their first year on varsity. I am looking forward to all that this team will accomplish in the future,” Mora said. “Qualifying for finals in the 300 meter hurdles is always exciting as it’s my favorite race, and I hope to continue to achieve greater results. This upcoming week is going to be full a lot of training in hopes of not letting my last season end just yet!”

Mora, Schoerner, and Suarez will all compete at CIF Finals at Cerritos College on Saturday, May 21. The girls 4×400 relay also has a small chance of racing. There, the three definite competitors look to win an individual CIF title.