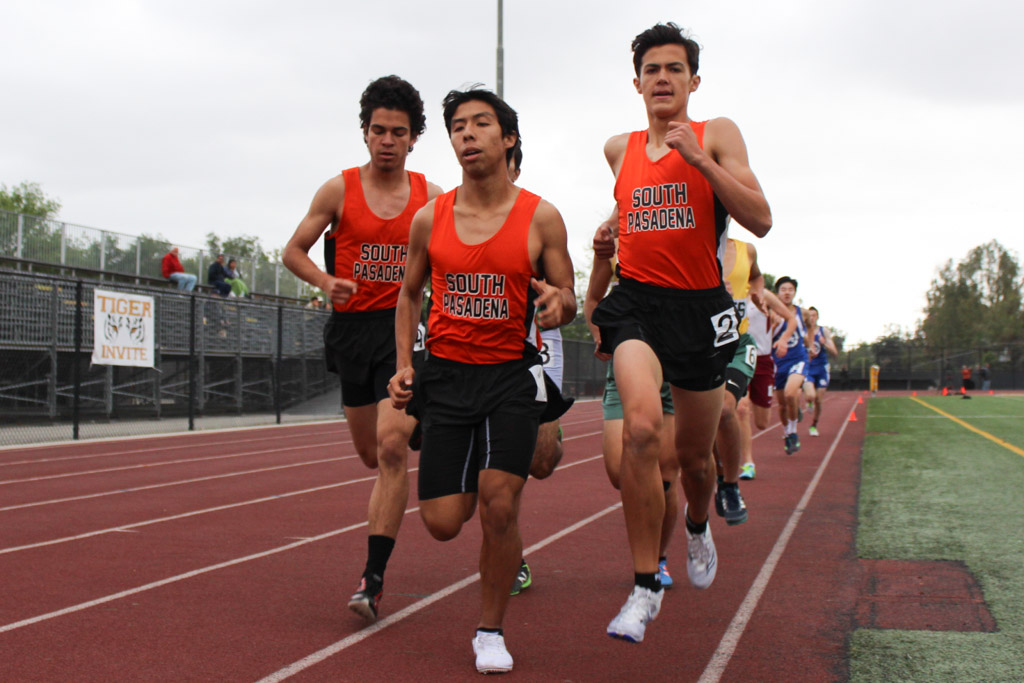 The South Pasadena track and field team competed against the best athletes from other Rio Hondo League schools at the league finals meet on Friday, May 4. Under the bright lights of Roosevelt Field, nine boys and ten girls from SPHS qualified for the CIF Prelims meet, three short from the 22 athletes who qualified for CIF last year. Additionally, both the boys’ and girls’ relay teams will be moving on to CIF in the 4×100 and 4×400. The top three finishers from each event qualified for CIF, providing that they also cleared the CIF Division III cut-off mark.

Under the hot afternoon sun, the jumping events began the meet and were followed by the rest of the races later in the evening. Senior Molly Round cleared a 5 foot bar in the high jump to earn a CIF berth and first place in league. Juniors Ashley Hugasian and Lauren Kafkaloff also placed first in their respective field events. Hugasian had a 35’5” foot triple jump, while Kafkaloff had a throw of 29’05” feet in shot put. The South Pas boys’ also were dominant in shot put, with seniors Josiah Topping and Ben Martinez taking the top two spots. Topping set his personal record at league finals with a 45’7” throw.

Sophomore Tianhao Wei set three personal records and qualified for CIF in all his events. He placed second in the 100 meter dash with a time of 11.25, and first in both the long jump and triple jump. His 45’05” mark in the triple jump was the fourth farthest of all 10th graders in California this year.

“It was a great day to PR, and winning was extremely satisfying,” Wei said. “I hope to make it to States and compete with some of the best competition California has to offer.”

Junior Christina Taylor also qualified for CIF, finishing first in the girls’ 400 with a 58.12 time. Senior Riley Segal came in second place, running the race in 60.46 seconds. Sophomore Gianna Beasley qualified for CIF in the 800 meter race for the second consecutive year, but was unable to place first. Surprisingly, her time of 2:17.85 was not enough to win. Senior Oliver Chang, who will be running at Pomona College next year, won both the 1600 and 3200 meter races.

The athletes who qualified for CIF will continue to practice before competing at the prelims meet on May 12th, in Costa Mesa.