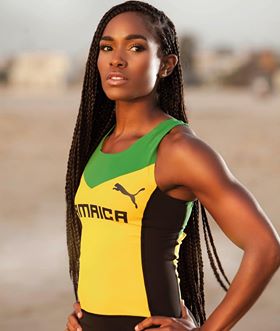 As a professional athlete, Nieto's goal is to take her knowledge and pass it on her trainees.

SPHS hurdle coach Shevon Nieto has always had a natural talent for running. But it wasn’t until ninth grade, when her family and friends pushed her to try out for the track team, that she set off on a journey that would shape the rest of her life. Along the way, an ambitious mindset of determination blossomed and has allowed her to achieve almost anything she puts her mind to.

Nieto was born in Jamaica and moved to New York at the age of 4. As a freshman at Uniondale High School, Nieto jumped into track and field and immediately excelled; she  finished third in the state for the 400m hurdles.

“At that point, I thought, ‘Okay, I’m pretty fast,’” Nieto said. “And I asked my coach, ‘What’s the highest level you can get to in track and field?’ and he said it was the Olympic Games. So I said, ‘Okay, well I’m making the Olympics!’”

Nieto then dedicated the rest of her high school career to beating personal records and earning state championship titles. Universities across the nation began to take notice and Nieto traveled out to the University of South Carolina on a full-ride scholarship. She kept building a name for herself at the collegiate level, ranking highly in national level meets and championships.

Nieto dedicated countless hours of training and preparing and eventually arrived at the next stop: the Olympic Games. She represented her nation of birth, Jamaica, and competed in the 400m hurdle in the 2004 and 2008 Summer Olympics.

Not only has she exceeded her childhood goal of making it to the Olympics, but she has gone on to compete on three world championship teams and is also currently ranked ninth in the world for the 400m hurdle.

Nieto continued to compete in nationally ranked meets and prepare for future Olympic Games and while training, Nieto took a coaching job for the SPHS track and field team. However, as she was heading to try out for the Jamaican team in 2016, her then-boyfriend Jamie Nieto, a two time Olympian and one of the best high jumpers in the nation, was involved in a paralyzing jumping accident.

Doctors confirmed that he was paralyzed due to a C3-C4 spinal injury and told the couple that he may never walk again. Still, they were determined to defy the odds and Nieto retired from her professional career to remain by Jamie’s side through the rest of his recovery.

“[The accident] wasn’t something that we let block us. Even though it was one of the hardest things we had to hear, it was just another challenge that we both had to face. And to this day, he’s not 100 percent, but the fact that he is up on his feet is a big accomplishment,” Nieto said.

After her husband’s accident and her retirement in 2016, the SPHS athletic community rallied around the Nietos which drew her to continue coaching the track team. From a coaching perspective, Nieto wanted to show her athletes how important it was to face challenges and overcome hardships, just like the ones she and her husband conquered.

“For the kids, it was really important for me to show them how we face challenges and how we overcome such difficult times,” Nieto said. “But I hope that when I coach these athletes, they learn just from running track and they apply the things they’ve learned to their lives.”

With extra time on her hands, Nieto decided to take her coaching at South Pas more seriously but also saw the opportunity to pursue her singing career. She always loved to sing in her free time and following her husband’s accident, Nieto utilized this musical hobby as an outlet to get her through tough times.

Last year, she published a song and a music video called “Through the Good and the Bad” which gained attention from America’s Got Talent (AGT). Nieto auditioned this month for the show and appeared on this season of AGT. Even while Nieto is taking up a music career, she still finds time to help coach the students at South Pas high school.

“[The athletes] see me as their coach, but also as a coach who is going on America’s Got Talent and doing a lot of different things. I hope that it shows them that no matter how busy I am, doing the things that I love, my heart still remains with them because [South Pas] is like home for me,” Nieto said.

Through everything in her life, Nieto has had the drive to achieve. Whether that be when competing in track or teaching her students, she has maintained a winning mindset.