Tiger football fumbles against the Titans 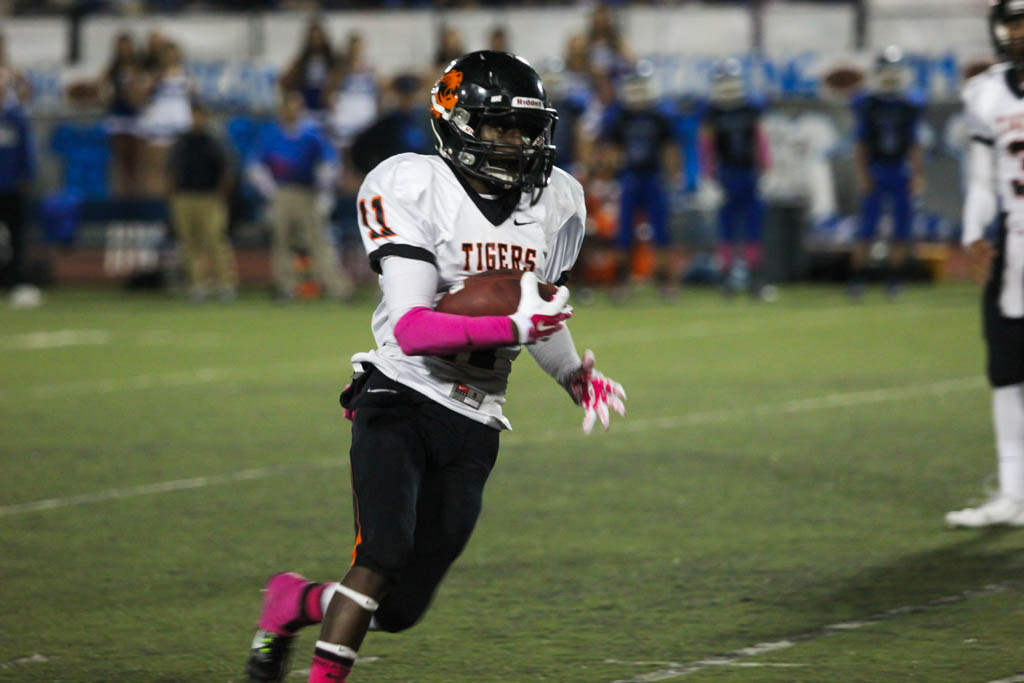 In the highly anticipated South Pasadena vs San Marino football game last Friday, the tension, fueled by the two schools’ long-standing rivalry between them as well as the Homecoming atmosphere surrounding the San Marino side, could be felt all around the stadium at the host venue San Marino High School. In the early moments of the game, the Tigers were able to capitalize on their very first two drives for touchdowns. However, a deep Titan bench and sheer athleticism wore the Tigers out, where they eventually lost the game 14-57.The Tigers are now 5-2 overall with a 1-1 record in league.

San Marino came into the contest looking to avenge their 48-42 loss to a strong Monrovia team on October 10. Despite the loss, the Titans were ranked 10th overall in the CIF Central Section standings.

The 60th annual John Crowley cup game started with the Tigers striking first, as the Tigers established their effective running game quick and early, with senior halfback Matthew Ayala leading the way, accounting for over 60 yards in the Tigers’ first drive. A great wide out pass from junior quarterback Michael Partida to junior wide receiver Max Luck brought the Tigers to the Titan’s half of the field with about 8 minutes left in the 1st quarter. Good runs by sophomore quarterback Jalen Ross and Ayala eventually led to the first touchdown of the game, with the Tigers leading 7-0. However, 57 seconds later, the Titan’s quarterback targeted senior JP Shohfi four times to make the game even at 7-7 with 4:41 left in the first quarter.

The Tigers continued to trudge through the San Marino defense, with rushes from senior running back Ernesto Jauregui, Luck and Ross continuing the chain of first downs. A fantastic 27 yard run by Ayala brings the Tigers to the two yard line, where Partida finished off the play at the start of the second quarter with a two yard quarterback sneak to make it 14-7.

After nearly recovering a fake onside kick, by place kicker Yasunori Iwayanagi, the Titans began their drive on the Tigers’ half. After a big stop on 2nd down by Jeremy Gabler on the Titan’s first rushing play, San Marino quarterback Carson Glazier connected with wide receiver Nick Prizada; and after a two-point conversion, the Titans led 14-15. The Tigers will not score for the remainder of the game.

South Pasadena missed a few chances to score, including a miscommunication near the goal line between Ross and halfback Emiliano Sornoso leading to a Titan recovery. From there, quarterback Glazier, bombed a 64 yard pass down the field to JP Shohfi, and the Titans were suddenly up 22-14.

Between the six and three minute-mark, neither side was able to break the deadlock, until Shohfi again ran in for a 57 yard touchdown reception to make it 14-29.

Hoping to salvage another touchdown before the half, the Tigers’ offense ran a series of quick screen passes to Luck, Gabler, senior Alton Phillips and senior Leon Marchis to bring the Tigers into the red zone with 41 seconds left. However, the Tigers could not capitalize, and the half ended with a rambunctious San Marino crowd on their feet.

South Pasadena coach Marty Konrad reminded his team that the game was far from over.

“He told us that we needed to step up big in our defense,” Luck said, “by limiting the errors, we could cut the lead down and fight harder.”

With the large amount of momentum on their side, San Marino kept their point streak going with a 30 yard pass to Shohfi, and then a touchdown pass to Aiden Santino. With a new-found energy, the Tigers brought the ball to the Titan’s seven yard line with contributions from Ayala, Ross and Sornoso, only to fumble it in the Titan’s end zone.

With their second turnover of the game, the Titans would not look back, scoring another three touchdowns to end the night 14-57, much to the delight of the San Marino crowd. Ayala led all rushers with 99 yards on 16 carries for one touchdown, followed by Ross with 59 yards.

Despite the loss, the team believes that the score does not accurately reflect their performance on the field. Although they felt that they gave it their best effort, several key mental errors down the stretch segued into multiple Titan touchdown conversions.

The loss marks the first time that the South Pasadena Tigers have dropped a game in over five weeks. The Tigers are now 28-29-3 overall against the Titans. The Titans move up to 5-2 and a 1-1 record in league, identical to that of South Pasadena.

The Tigers will now need a repeat performance from their first quarter against San Marino in order to defeat the Monrovia Wildcats this Friday. The Wildcats come into the contest with a 6-1 record, coming off a win most recently against the Temple City Rams 56-6.